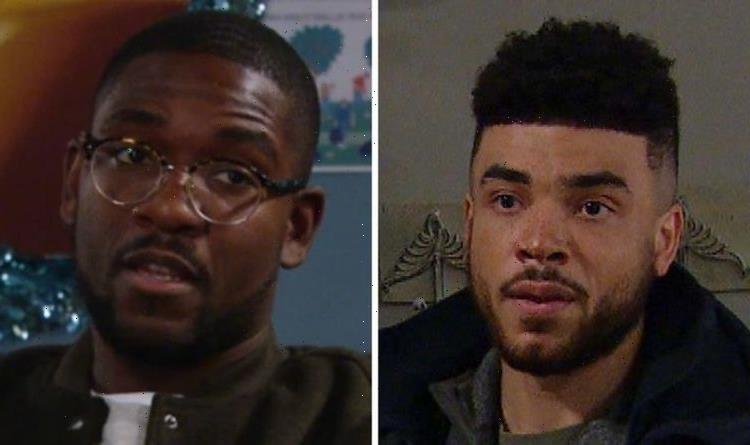 Emmerdale: Vanessa returns to the Dales

Emmerdale resident Nate Robinson’s (played by Jurell Carter) life could soon come crumbling down as his secret affair comes to light, with Fiona (Yemisi Oyinloye) dropping a bombshell – she’s Ethan Anderson’s (Emile John) sister. Ethan is on a journey to understand why his mother abandoned him when he was a baby and it seems Nate’s one night stand may have some answers.

Fans of the soap opera have been deeply invested in Nate and Tracy Metcalfe’s (Amy Walsh) relationship since his affair with Fiona.

Ethan and his father, Charles Anderson (Kevin Mathurin), have also been battling their own family issues following the arrival of his mother Esme Anderson (Eva Fontaine).

Taking to Reddit, fans have theorised what they think may happen with the two families and have hinted at a possible merge of storyline.

@ThirdCoastPelican wrote: “I’m predicting that the girl Nate cheated on Tracy with will turn out to be Charles’ daughter/Ethan’s sister they didn’t know about until the ex showed up and told Charles she had been pregnant when she left.

“The girl suddenly turned up in the village, and Nate freaked out and told her to leave, and he wished he’d never slept with her.

“So that tells us she’s going to be coming back around.

“And Ethan has suddenly decided to get back in touch with his mum, which will mean meeting his sister.”

Responding to the theory, @torilost added: “Good shout, very soapy! Completely forgot about the sister with all the deaths happening!”

@Maymiag also added: “Yeah, I totally forgot about that until this post! You’re probably right!”

Viewers will remember Nate and Tracy’s relationship was pushed to breaking point after the birth of their daughter Frankie.

Tracy suffered a breakdown as she struggled with postnatal depression, resulting in her nearly leaving her family behind.

As he struggled to keep their relationship afloat and keep the farm running, Nate went on a night out and ended up meeting stranger Fiona.

Nate has spent weeks lying to fiancée Tracy about what happened on the night he spent away from their home.

Tracy agreed to take Nate back after he repeatedly claimed he merely slept on the sofa in Fiona’s home.

However, viewers recently discovered this wasn’t the case when Fiona turned up in the village, and Nate warned her off, referring to the fact that they’d slept together.

In upcoming scenes, Nate’s secret is set to be exposed as he breaks the news to Tracy, and she kicks him out of their home.

Earlier this year, Ethan went on a mission to find his biological mum, who abandoned him when he was a child.

He spent months trying to find his mum so he could understand why she left him, and last month he finally came face to face with her.

Esme explained to her son she suffered from post-natal depression, but Charles thought she was acting that way because she didn’t want to be with him anymore.

However, she failed to mention to Charles she was pregnant with their second child, Naomi, and after the birth of her second child, Esme’s post-natal depression returned, and she gave her daughter up for adoption.

Could Fiona be Esme’s daughter she gave up for adoption?

It wouldn’t be surprising if she changed her name in the adoption process.

How will Nate feel if Fiona becomes a permanent resident in the village?

Is 'Yellowstone' Based on a True Story?