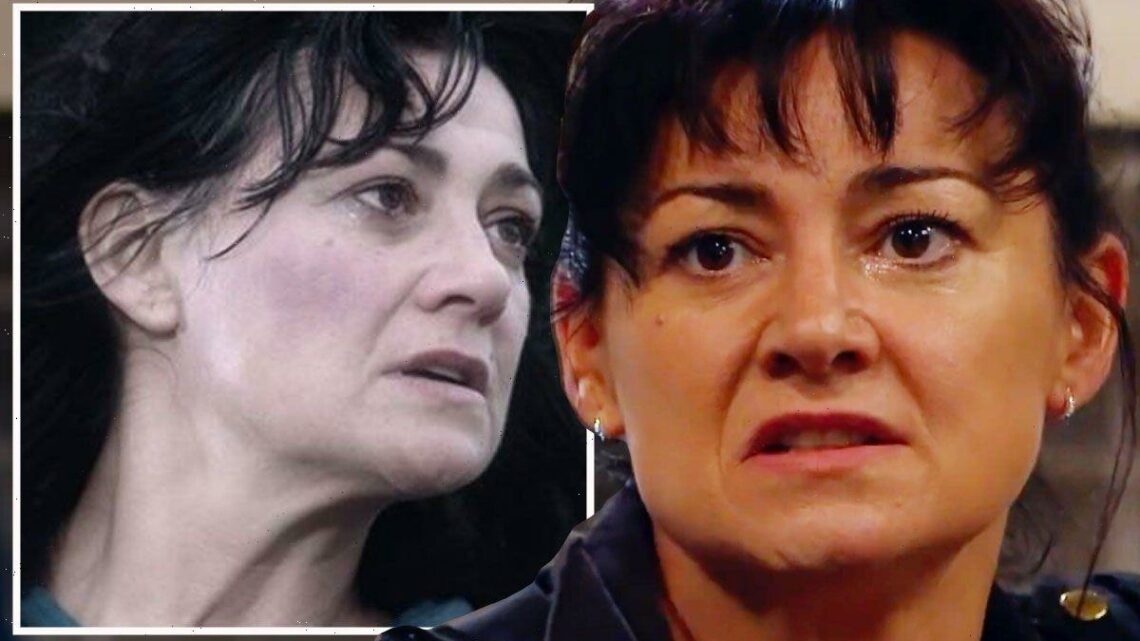 Moira (played by Natalie J Robb) is currently unaware Emmerdale newcomer Suzy Merton (Martelle Edinborough) knew her late daughter, Holly Barton (Sophie Powles), nor does she know the pair used to take drugs together. In upcoming scenes on the ITV soap, Vanessa Woodfield’s (Michelle Hardwick) girlfriend will be shocked to learn her friend’s mother lives in the village and she will try desperately to cover up her secret. However, information like this doesn’t stay harboured for long and it is only a matter of time before Moira learns the truth about her child’s death, but will she take revenge by the deadliest of means?

It will transpire in upcoming episodes Suzy was the person to blame for Holly taking an overdose and dying several years ago on the show.

Having become acquainted with one another through work, the pair used to take drugs together and one day, Suzy was late to meet her dealer.

She called on Holly to pick up the stash for her but struggling with addiction at this point, Moira’s daughter took the narcotics.

Unfortunately, this led to her death and for years, the young woman’s mother has thought it was just an accident, not realising someone was behind this tragic sequence of events.

Speaking about what could happen if Moira learns the truth, the actress who plays Suzy, Martelle, has teased a dramatic confrontation.

The soap star explained: “She doesn’t want anyone to know that she knew Holly, and she becomes really scared and worried.

“Not that her cover has been blown as she’s not trying to hide anything, but she doesn’t realise the connections and now that she does, she’s scared that people are going to blame her for things

“I love working with Natalie, so I’m quite excited to do those scenes [when Moira finds out] because they are going to be quite tense, probably lots of shouting from Natalie to me.

“Moira’s not a character you’d want to go up against, but I think Suzy would hold her own a little bit to a certain extent.

“Or she’ll try, but obviously she is riddled with guilt as well. I don’t know how it will pan out, but I think it will be really good,” she told Digital Spy.

As the newcomer and Moira go head to head, it could become clear to the viewers watching at home one of them won’t make it out of the argument alive.

Not because one of the them is a villain but because the strong emotions of the moment could lead them to make things physical.

With one thing leading to another and Holly’s mother wanting answers, she could start pushing Suzy in an attempt to intimidate her.

However, working on a farm can be very dangerous and as Moira continues to push Suzy, she might not realise there is a rake hanging on the door.

Unfortunately, this could lead to the newcomer being killed as she becomes impaled and it will be up to Moira to hide the body.

The only person living in the village who would care about Suzy going missing would be Vanessa, as the newcomer could have burnt her bridges with Leyla at this point.

Neither of them would realise Moira had struck again, as Suzy wouldn’t be the first person the farmer has killed over the years.

Back in 2017, it was Moira who murdered Emma Barton (Gillian Kearney) after an autopsy revealed she had not committed suicide as first thought.

Although she died as a result of falling from the viaduct, an investigation began as to who pushed her from the great height.

During a series of flashbacks when her funeral aired, it was explained Moira had let her emotions take over and therefore, she claimed her first victim.

At first, Moria had tried to save Emma’s life when she spotted the killer standing near the viaduct but it wasn’t long before things turned ugly.

It was actually a conversation about Holly which led to Moira murdering Emma as the latter told her it was her fault her daughter was dead.

As she knew she was getting Moira more and more irate, Emma continued to goad her, telling the farmer her daughter would still be alive if she cared more.

Having had enough of Emma’s vile comments, Moira saw red and pushed her off the viaduct and to this day, she has not been charged with the murder.

Would she be able to stay out of prison a second time if she were to murder Suzy or would her time as a free woman finally have run out?

Speaking about being Emma’s murderer, the actress who plays Moira, Natalie, explained: “When Holly died it was such a shock as nobody saw it coming and that is much better for the audience.

“Moira didn’t calculate this – she didn’t go to murder, she wanted to bring her down from the edge but Emma pushed the wrong buttons.

“Don’t talk about her kids in the wrong way! Don’t push Moira when she’s angry! Emma made the decision that Moira would be the one to push her.

“She even smiled when she fell. She has won as all the pain and guilt will be onto Moira so she was calculating right to the end,” she told Metro.co.uk at the time.

Does she have it in her to murder another character?