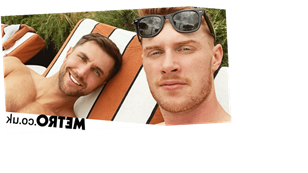 Emmerdale stars Max Parker and Kris Mochrie have seemingly confirmed their romance with a holiday together.

Max — who portrays Luke Posner on the ITV serial drama — filmed both he and on-screen brother Kris on a plane prior to their flight, for a video which was later posted on social media.

Upon their arrival at their holiday destination, Max then posted a video of their hotel room on his Instagram Stories.

According to reports, the pair enjoyed a string of dates after they met on the set of the ITV soap.

A source told The Sun in July: ‘They met on Kris’ last day filming and just hit it off.

‘They were cast as brothers and are really alike and have been joking that casting did a great job.

‘The boys kept in touch after Kris finished on the show but they’ve spent a lot of time together over summer.

‘It’s early days but they’re really enjoying themselves and who knows what the future holds.’

Lee died of injuries sustained in this attack, but the arrival of his mum Wendy (Susan Cookson) resulted in Lee’s brother, Luke — portrayed by Max — becoming something of a soap mainstay, as he moved into the village.

Luke has featured in many a storyline over the last year — from his brief rivalry with Aaron Dingle (Danny Miller), to his relationship with Victoria.

More recently, the character acquired a job as a chef in the Woolpack.

Whether or not he and Victoria will find happiness together remains to be seen.