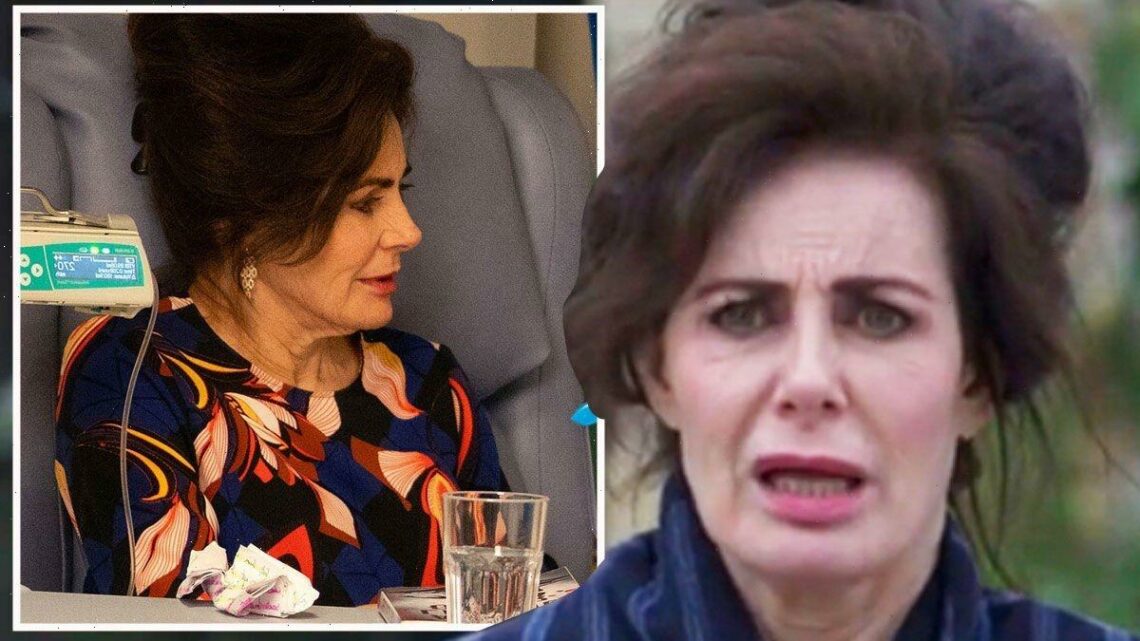 Emmerdale star Sally Dexter speaks out on heartbreaking storyline: ‘This is real’

Sally has been playing Emmerdale matriarch Faith for over five years, who is the mother of Cain Dingle (Jeff Hordley) and Chas Dingle (Lucy Pargeter). During this time, viewers of the ITV soap have seen the character struggle to build relationships with her family, keeping secrets about long-lost children and has she has had quite a few health issues. It seems the beloved villager is going to be making a permanent exit from the show in the coming months and the actress has explained it is important for the watching at home to get a grasp of how heartbreaking having a terminal diagnosis is.

During the soap’s big week of episodes airing last month, Faith told her daughter-in-law Moira Barton (Natalie J Robb) that she had been diagnosed with secondary breast cancer.

Following her reintroduction into the show in 2017, it was explained the Dingle matriarch had suffered from cancer and had a double mastectomy as part of her treatment.

It was hoped this would be enough to keep the cancer at bay but it has risen its head once more and this time it has spread all over her body.

In heartbreaking scenes, Faith was told by the doctor she would not survive this but they would treat her with chemotherapy to prolong her life for as long as possible.

Unfortunately, the beloved character has not yet told her children but in next week’s episodes the truth will finally come out.

In an interview with Express.co.uk and other press, Sally was asked if she got emotional filming the scenes which are so real for many viewers.

The soap star said: “Hugely. One of the great things about the crews here and the other actors is how supportive they are.

“I felt very cocooned, very held. It’s been a great experience in that way. But also you don’t forget ever, for a moment that you’re doing something which is real and what is happening to people.

“That is how we portray it,” she continued and Sally, alongside the team, has been working with charity Breast Cancer Now to get every part of the storyline right.

The actress said: “It’s 100 percent vital we do it justice. There are many people sitting out there watching the show who have it.”

That is how we portray it

“[There are so many people] sitting next to somebody who has it, who are about to have it and they need to know first and foremost that you can get better,” she continued.

“We want to tell the story as truthfully and as honestly and as carefully, with all the humour and humanity that goes along with a situation like this.

“You don’t suddenly become a saint or anything like that.

Producer Laura Shaw has explained why Sally was the person to take on the role and deliver a heartbreaking performance.

The soap boss said: “Faith’s zest for life with her spicy sense of humour and appetite for fun and adventure means that while there will inevitably be some painful and heart-wrenching moments, we will also see life-affirming and positive moments of light in the story too.

“Given the calibre of actor Sally is, I know she will approach the story with great honesty and depth and do it justice.

“This in turn will raise awareness of such an important issue that affects many people on a daily basis.”

Clinical Nurse Specialist at Breast Cancer Now, Catherine Priestley, also explained why it is important for the story to be told in the mainstream media.

Catherine said: “With it estimated that around 35,000 people are living with secondary breast cancer in the UK, it’s been an incredibly important opportunity for us to provide expert guidance around Faith’s storyline.”

“Giving a steer to script writers as to how her diagnosis and experience of the disease can be portrayed accurately and raising awareness of some of the signs and symptoms of secondary breast cancer among millions of Emmerdale fans,” she continued.

“Everyone’s experience of breast cancer is different, but we know from calls to our Helpline just how anxious women may feel about the possibility of their cancer returning.

“And how overwhelming the impact of a secondary breast cancer diagnosis can be for patients and their families.”

Having watched the beginnings of the storyline at home, viewers have already taken to Twitter to share their praise for the actress.

Michelle wrote: “I don’t want Faith to die, she’s my favourite dingle. Sally Dexter is incredible as her #Emmerdale.”

Lin posted on the social media platform: “Love the dynamic between Faith and Moira – sad but with humour #Emmerdale.”

Ryan added: “Faith you need to tell your family the truth they will support you #Emmerdale.”

Whilst Tam commented: “Poor Faith lying about how great her son Cain is with her cancer #Emmerdale @emmerdale.”

“Emmerdale time tough times for Faith, bless her. I think she should tell the whole family the truth about what is happening #Emmerdale,” Roberto shared.