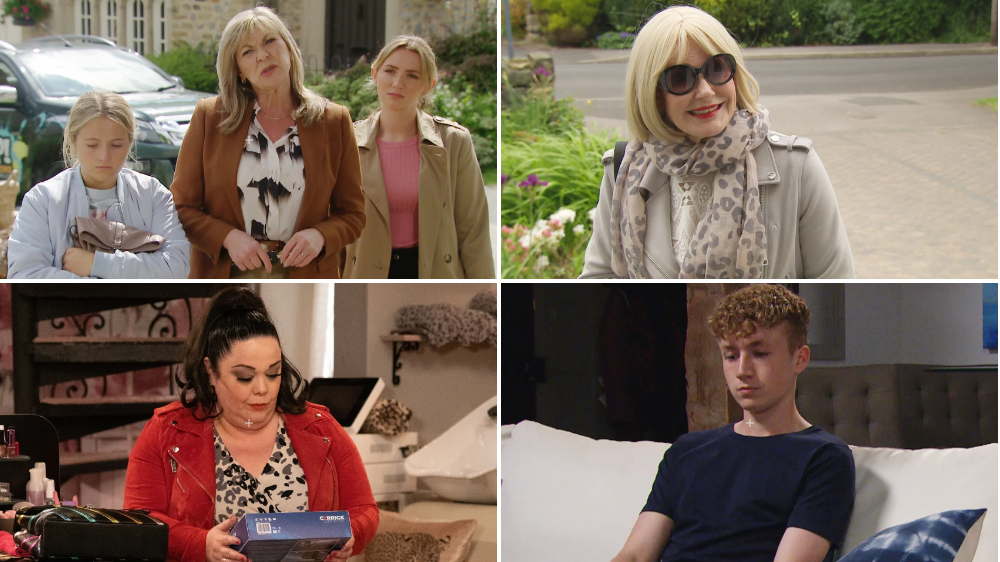 There is some serious scheming in Emmerdale as Sandra Flaherty (Joanne Mitchell) targets Rishi Sharma (Bhasker Patel) and his bank balance – but Mandy Dingle (Lisa Riley) is clocking that she isn’t all that she seems.

Meanwhile, Charity (Emma Atkins) finds herself shunned by returning son Noah (Jack Downham) as he is released from prison – but he is getting on better with Amelia Spencer (Daisy Campbell).

Good thing too, as she has problems of her own…

Dan is shocked when Gabby and Kim tell him how Amelia has been impersonating Gabby in order to visit Noah.

Dan is relieved when Harriet invites him and Amelia to live at Woodbine.

Sensing Mandy is onto her, Sandra makes a show of putting Rishi’s tip money in the jar. Mandy secretly takes out her CCTV camera kit, determined to get to the bottom of the missing tips.

Paddy makes a suggestion to Moira that may help Vanessa.

Charity is stunned to learn Amelia has been visiting Noah in prison and soon quizzes her about it. Charity is surprised Noah will be released in a matter of days.

Rishi is gutted when the woman from his dating app cancels their meet at The Woolpack. But having set him up nicely, dolled up Sandra swoops in and offers Rishi her company instead. Soon the two go back to Rishi’s as he leads Sandra up to his bedroom.

Lydia is surprised when Kim unveils her as her new wedding planner.

Amelia has the weight of the world on her shoulders.

Rishi is worried how his night with Sandra will look and she plays on his insecurity. She has him where she wants him as he sheepishly offers Sandra an envelope of money to make up for his behaviour.

Gabby is pleased to have Liv’s support.

Chas is excited to get a message from Al to say he’s back. As he arrives, they are both unaware Kerry is just behind him.

When Al and Chas are leaving a hotel following a secret rendezvous, Al ushers an oblivious Chas away when he clocks Kerry in the hotel reception.

Kerry is under the impression that Al plans to meet her there, but she smells a rat when the receptionist tells her there’s no Al Chapman booked in at the hotel.

Sandra is shocked to suspect that Mandy is onto her.

Juggling the stress of a day working at the cafe with Kim on the phone, a stressed Lydia vows to plan the wedding of the decade for Kim.

The pressure mounts on Leyla.

Chas is nervous her secret affair might be exposed.

Mandy fills in Lydia on her suspicions.

Noah is hesitant adjusting to life back in the village.