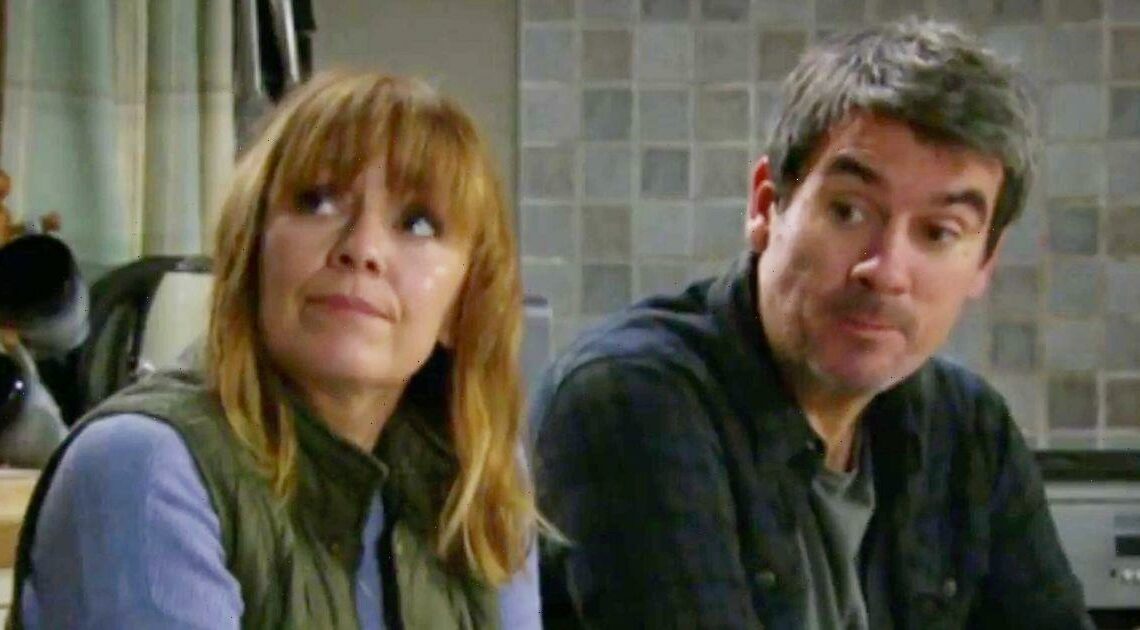 Want all the hottest soap gossip? Share your email to get news, interviews, spoilers and more from the Daily Star

Emmerdale fans went wild over a scene which saw Rhona Goskirk and Cain Dingle sit down together – as the actors are married in real life.

The ITV stars – Zoe Henry and Jeff Hordley – have been married since 2003, but rarely appear on-screen together so fans were loving the uncommon sighting.

One said on Twitter: "It's so weird seeing Jeff Hordley and Zoe Henry in a scene together."

Another wrote: "I bet Cain's dying to snog Rhona!"

A third said: "Real husband and wife, sitting down side by side. How rare is this?"

Someone else commented: "Cain and Rhona scene OMG."

A fifth added: "Cain and Rhona scene so they didn't have to distance."

While a sixth said: "It seems off seeing Rhona and Cain sat together!"

The duo were having a conversation about Moira's farm, and how Rhona wouldn't be working there any more.

They're rarely ever seen on-screen together, despite sharing a number of mutual friends or village relationships.

However Rhona was drunkenly admitted that Cain was her village guilty crush, in a nod to their real life romance.

Despite the stars being loved-up in real life, they're happy to rarely share the spotlight on television.

Jeff previously said: "We don't film at the same time so we can share the childcare.

"I don't think we'll ever have a storyline together – Cain and Rhona are too different. Cain thinks Rhona's a bit of a snobby cow, so for me and Zoe it works well.”

And Zoe has spoken on the matter, saying: “Let's be honest, Rhona and Cain would never interact.

"The only way they'd cross paths is if Cain bought a hamster and brought it into the vets, which is most unlikely.

"I can't imagine them having a conversation about anything.”

Of course, Cain clearly didn't take a hamster into the vets, but the characters have Moira in common.

Cain is married to her and Rhona had been working with her at the farm, though that partnership has now come to an end.

Emmerdale airs weekdays at 7pm, with an extra episode at 8pm on Thursdays, on ITV

For more of the latest showbiz news from Daily Star, make sure you sign up to one of our newsletters here .