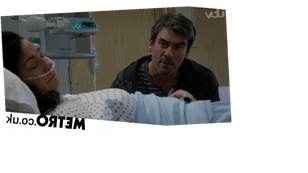 Emmerdale fans call for Cain and Moira to get back together

Emmerdale fans are calling for Cain Dingle (Jeff Hordley) and Moira Barton (Natalie J Robb) to get back together following emotional scenes in tonight’s episode as Moira recovered from surgery.

As we already know, Cain had feared the worst after he discovered Moira had been the victim of the hit-and-run, and he has continued to support her throughout her time in hospital.

Viewers have known how much Moira means to Cain, but he has been unable to express his true feelings.

In tonight’s instalment, a run-in with Nate (Jurrell Carter) made him realise how much he still loves her, and with Moira’s surgery proving to be successful, he later went to the hospital to see her.

As Moira began to wake up, she had asked Matty (Ash Palmisciano) if Cain was present, to which he said no. However, shortly after leaving, Cain later headed into Moira’s room, assuming she was still in a coma.

Cain thanked her for being so strong and pulling through not only for her boys, but also for him.

He later headed off, with Moira softly smiling, having heard his heartfelt speech.

One thing’s for certain, fans were touched by these scenes, with many suggesting that the two should become a couple once again.

Taking to Twitter, one wrote: ‘Aw Moira, pretending to be asleep. At least now she FINALLY knows how Cain feels about her.

‘They absolutely HAVE to reunite sooner rather than later right?’

Another added: ‘I really hope Cain and Moira get back together. They are destined for each other.

‘Lockdown has taught Cain that he needs to fight for what he has got. Moira is all he has got. They always end up back together don’t they.’

While one particular viewer was all caught up in their feelings, as they tweeted: ‘Good god @emmerdale what are you doing to us… Cain Moira my emotions can’t keep up.’

Here’s hoping that the two will please fans by reconciling in the future – it’s what we all want after all.

Emmerdale continues next Monday at 7pm on ITV.

If you’ve got a soap or TV story, video or pictures get in touch by emailing us. [email protected] – we’d love to hear from you.

Spoilers: Corrie's Geoff apologises for abuse — will Yasmeen take him back?