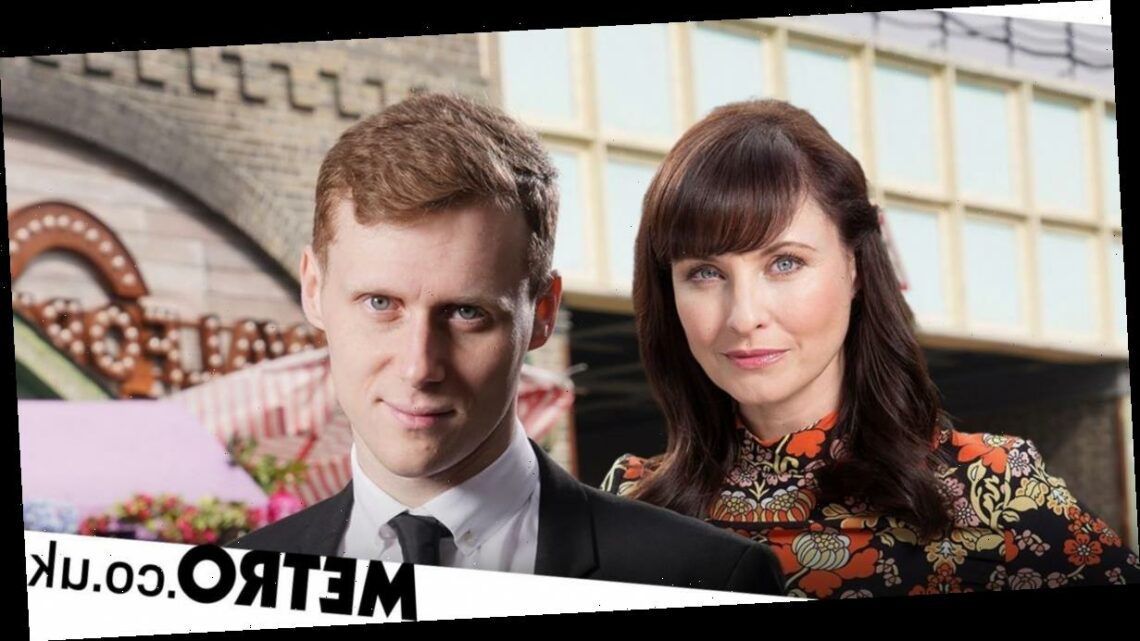 EastEnders star Emma Barton has been extremely busy of late – as well as launching the second series of the popular podcast Petcast, she is central to a huge plotline in the soap – one that saw her character Honey Mitchell subjected to an attack after having her drink spiked.

The actress exclusively told Metro.co.uk: ‘It was such a brilliant story but very difficult to play and it was hard not to let the emotion get to you. The viewer response has been great to it and I think it’s important to hit home that it’s not right to just say “be careful”.

‘These men operate in such covert ways and are often charming and even the most savvy person wouldn’t notice a thing. I spoke to Rape Crisis and downloaded an app too and read a lot of stories and honestly it was so upsetting and angering. I am really glad I got the chance to portray the story.

‘I felt bad for the poor guy who played Paul – honestly the most lovely and gorgeous guy! I knew he’d get some stick and after filming the scenes I just wanted to give him a big hug but of course I couldn’t. It’s a tough role to take on, he played it really well because Paul was so likeable and charming on the face of it. But yes, sometimes you get these roles where you know “I’m not going to be very liked after this!”

Of course, her biggest support unit since then has been Jay – and the rumour mill is turning as to the nature of their relationship. Emma certainly isn’t ruling out the possibility of a romance…

She said: ‘It’s really interesting, Jay has been her support after all of this and she has supported him too and helped him to grow up that bit more. There are definite complicated feelings there and what I would say is that you can’t help who you fall for.

‘If anything did happen, it would be very complicated and cause quite a bit of drama because she, Jay and Billy have such a history together and poor Billy, he still loves Honey very much. It might cause a lot of conflict.’

Of course, this is a little Christmas edition of the soaps newsletter so we had to ask Emma about the festive season in Walford – always a big deal!

She enthused: ‘Oh it’s must watch, I promise you – they haven’t pulled back on Christmas this year because of Covid or anything, in fact I don’t think they’ve pulled back on any of the stories. It is as big as ever and honestly I think it’s up there with our best Christmas episodes. They’re always unmissable and this year is no different – and it’s so good that we have a Christmas Day episode of EastEnders for tradition and a bit of normality, none of us know what kind of Christmas it’s going to be yet but we have EastEnders!

‘The work that has gone in is amazing though – I watched a scene of Jamie and I on the swings last week and it stunned my how real and close we looked. The swings aren’t two metres apart so we weren’t both on them at the same time but you could never tell!’

Animal lover Emma took over Petcast from Gemma Atkinson and was full of passion as she discussed the project.

She grinned: ‘I just thought it was such a brilliant idea and the work by Blue Cross is amazing. Honestly, I learned so much, I adored animals and it was so interesting to find out so much about them and get ideas with what you can do. We filmed all six of the episodes across two Sundays and it was just such fun, I wanted to keep continuing.

‘There’s one episode about questions that you would ask your pet and I wanted it to go for two hours, just people sending in the questions for their animals! They do such funny things, don’t they? It’s fascinating to learn about them.

‘It was honestly such a dream to be asked and of course, I had Poppy Dog with me. Oh she’s just beautiful, she’s 12 and half – she’s not always had the best time with health, she’s actually allergic to grass which is not the most useful thing for a dog but we work round it!

‘She’s got a lovely spirit and a few crazy quirks – she’s a bit like her owner in that sense! I love her so much, she’s my fur baby.’

Lockdown has been a tough time for all and many have sought comfort in the love of their pets. This is something that Emma can certainly relate to.

She recalled: ‘You know, it’s so amazing how much animals can help and it’s such an important point. At the start of the first lockdown I was a bit all over the place with work shutting down and everything else and they are a focus for you to look after. And they just make you smile and cheer up.

‘I think anyone who has a pet has found them a real comfort during lockdown and it gave me the chance to really get out and find new walking spots and that lifted me mentally as well as being good for her. They make you do things like that and getting the fresh air and walking in beautiful scenery gave us both what we needed so win-win.’

That said, a pet isn’t just for lockdown or Christmas and she urges caution to anyone who considers getting an animal on a whim.

Emma explained: ‘I do think it’s important for people to consider how much there actually is to put into looking after an animal. I know there were a lot of people who thought about getting a pet for lockdown but an animal is a real commitment so not something for just the here and now.

‘I hate all the stories of animals being given up and needing homes in shelters so it’s something you have to really consider and I hope some of the conversations on Petcast help with that – there is an episode about what you need to do if you’re getting a puppy. It’s not enough to just leave your dog at home and have someone come in and give them a five minute run outside, they need contact and so much more than that.’

EastEnders may be a huge talking point right now but so is Strictly – and former contestant Emma has been giving co-star Maisie Smith some tips. Sleep – and plenty of it!

She gushed: ‘Oh lovely Maisie, you can’t tell the difference between her and the professional, that week one dance was so, so good. The advice I gave her was to make sure to get lots and lots of sleep! It was one of the hardest challenges of my life but I loved it so, so much.

‘I was watching it feeling jealous that I wasn’t doing it again but then after a bit, I remembered how sore my feet were and was glad I could be on my sofa putting my feet up. I swear, my feet haven’t shrunk back to normal since then – I was a six before Strictly and now I’m a seven!’

You can tune into Petcast on various platforms by following this link.