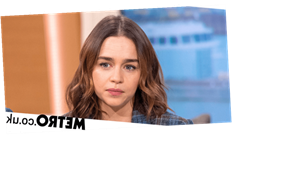 Emilia Clarke has called the backlash to the Game Of Thrones finale ‘flattering’ as she joined This Morning’s Holly Willoughby and Phillip Schofield.

The 33-year-old actress, who played Daenerys Targaryen in the HBO fantasy, was grilled by the hosts on the petition to remake season eight which has received almost two million signatures.

Sat next to her Last Christmas co-star Henry Goulding, Emilia began: ‘On every level, it’s just profoundly flattering that people genuinely cared that much and they were with us for that long and that they really, truly believed in it.

‘I don’t read anything online really because doesn’t help my brain, but largely speaking I think people are being really kind about Daenerys and Mother Dragon and backing me up, so that’s lovely.’

She continued: ‘I don’t think there’s an ending that anyone could’ve written.

‘No matter how many signatures were on any bit of paper, you just can’t and that is really just so flattering.’

The Change.org campaign titled ‘Remake Game Of Thrones Season 8 with competent writers’ was created in response to the fourth episode of the series, The Last Of The Starks, which saw the death of a number of characters including Daenerys’ much-loved dragon Rhaegal and friend Missandei.

‘This series deserves a final season that makes sense,’ it reads.

Last month, Game of Thrones director Neil Marshall agreed with the backlash to the finale and told Metro.co.uk that he believed ‘it was really rushed’.

‘I kind of agree with a lot of the criticism that it was really rushed,’ he said. ‘Everyone ended up where they were meant to end up but they got there in a little bit of a rush in the end.’

‘One of the greatest experiences I had with working on both those episodes was that they were so open to bringing my ideas, particularly about battle scenes and how battles worked.’

This Morning airs weekdays at 10.30am on ITV.

'Below Deck Med': João Franco Branches Out in the Yachting Business