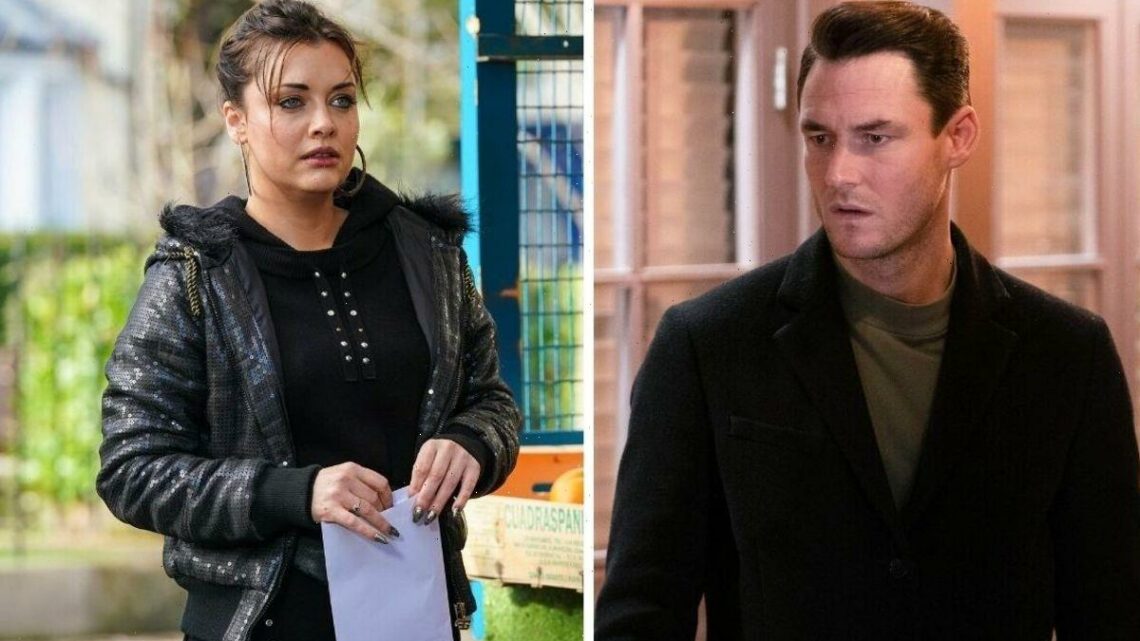 However, Zack (played by James Farrar) dropped a bombshell on the expecting mother recently, telling the EastEnders favourite he had been offered a “dream job” on a cruise ship. The pregnancy news had come as a shock to the pair, and although Zack admitted he wasn’t father material, he was willing to change his ways. In upcoming episodes though, it seems escaping his history will be more difficult than he thought as a face from his past turns up in Walford.

In scenes yet to air on the BBC soap, Zack checks with Whitney (Shona McGarty) that she’s happy for him to take the cruise ship job.

Believing it’s what Zack wants, she urges him to go for it.

Later, Chelsea Fox (Zaraah Abrahams) collars Zack and reveals to him that Whitney doesn’t want him to leave.

The EastEnders favourite becomes angry at being pressured by Chelsea as he’s only taking the job to make money to support the baby.

However, he later cools down and turns down the opportunity.

Whitney’s thrilled by his change of heart, but Zack’s happiness is short-lived when he spots his old acquaintance, Brett (Fabrizio Santino).

Looking for other work, Zack is trying to persuade Ravi Gulati (Aaron Thiara) to give him the head chef role and a pay rise at Walford East.

Whitney acts as his cheerleader, but things go horribly wrong as Zack spots Brett and gets rattled by his presence.

Her brother soon warns her off employing him. But, what is Zack hiding and could history be repeating itself?

During a heated confrontation later, Zack tries to scare Brett into leaving Walford.

However, Brett drops a bombshell that turns Zack’s world upside down.

It seems something from Zack’s past will be playing heavily on his mind as his actions catch up with him.

He initially copes by being in total denial, though.

Whitney is pleased to hear Zack has convinced Ravi to give him a second chance.

Although, she becomes concerned by his lack of enthusiasm about the ultrasound.

Broken, Zack later goes to the club to drown his sorrows and ends up in a drunken row with Whitney.

He continues to drink and in a fit of rage and fear smashes a glass, cutting his hand.

Zack breaks down, not knowing what he should do.

Sharon knows something is wrong with Zack and tells him she’s there for him whenever he’s ready to talk.

Chelsea, meanwhile, isn’t buying Zack’s change of heart over the baby and is determined to talk sense into him.

He sits alone in the Walford East kitchen when he has an accident and breaks down again, sobbing.

Will Chelsea be able to get the truth out of him?

It isn’t clear what Zack is hiding, but could it be that he is already a father and had no idea?

Perhaps Brent knew one of Zack’s exes, and the news is too much for the chef to cope with.

Whitney is hoping to go ahead with the pregnancy with or without Zack, but will likely need his support.

It seems the father-to-be is already doubting his promise to stick around though.

Viewers are hoping the couple gets their happy ending, so will be hoping Sharon can convince Zack to stand by Whitney.

Will his friends and family support him?

EastEnders continues on Tuesday at 7.30pm on BBC.

What you need to know about the House Speaker election