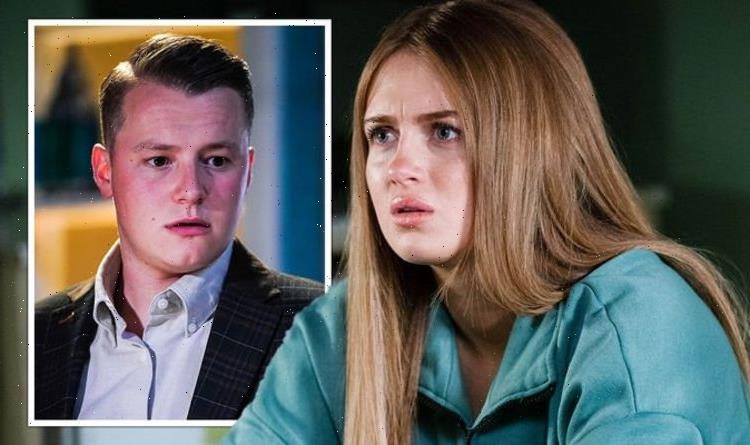 EastEnders twist as Tiffany Butcher jailed after being framed by newcomer Aaron?

EastEnders: Woman tells Ash she doesn’t want to be treated by her

EastEnders viewers have been growing concerned for Tiffany Butcher (played by Maisie Smith) ever since the arrival of Aaron Monroe (Charlie Wernham). The newcomer recently moved to Walford and it wasn’t long before he took an interest in Tiffany. According to official BBC soap spoilers, Tiffany could soon get swept up in one of Aaron’s racist rants. Could the far-right criminal end up getting Tiffany in trouble with the law?

In upcoming scenes on EastEnders, it’s awkward when Tiffany and Aaron spot Keegan Baker (Zack Morris) on a date at The Vic with Anna (Alice May Simpson).

Anna quickly cottons on to the awkward atmosphere and leaves as it becomes clear Keegan isn’t over Tiffany.

Later on, Keegan gets some advice from Mick Carter (Danny Dyer) about the state of his relationship with Tiffany.

Mick’s words of wisdom soon lead Keegan to come to a big decision about his future.

He later meets up with a hopeful Tiffany to announce he’s decided he wants a divorce.

Keegan’s hopeful his second date will go better as a chance run in with Anna at the hair salon leaves Tiffany feeling embarrassed.

Later at The Vic, Aaron, who overheard his sister Dana Monroe (Barbara Smith) and Bobby Beale (Clay Milner Russell) talking about the mosque fundraiser, rants about the woke brigade cancelling the nativity.

Keegan overhears the discussion and scolds Tiffany for listening to Aaron’s rubbish.

However, ignoring Keegan’s warning, Tiffany shares a petition on her social media page and things soon spin out of control.

Later on, Tiffany feels fragile in the aftermath of what happened and Aaron is forced to apologise.

She accepts his apology, and they agree to go for lunch but not before Tiffany signs her divorce papers, ending her marriage to Keegan for good.

Could Tiffany be getting too close to the manipulative and dangerous Aaron?

Aaron has already proved he’s not afraid to let his loved ones get caught up in his criminal behaviour after his father gave him a false alibi.

Harvey Monroe (Ross Boatman) recently lied to the police about his son’s whereabouts on the night of a severe assault on a taxi driver, after Aaron insisted he didn’t throw any punches.

Despite Aaron promising his dad he won’t get involved in any more hate crimes, he was later seen spray painting hateful graffiti on the outside of the Argee Bhajee.

If he’s willing to manipulate his father, there’s a chance he could soon do the same to Tiffany.

Could the far-right criminal end up getting Tiffany in trouble with the law?

As Aaron continues his behaviour, he could end up framing Tiffany for a crime she didn’t commit in a bid to save himself from prison.

EastEnders have already confirmed actress Maisie Smith, who plays Tiffany, will soon be leaving the soap.

There’s a chance her exit storyline could involve Tiffany being sent away to prison.

Some EastEnders viewers have been sharing their concern for Tiffany on Twitter, with many hoping she stays away from Aaron.

Will Aaron be willing to frame Tiffany for a crime in a bid to save himself?

EastEnders continues Monday at 8:05pm on BBC One.