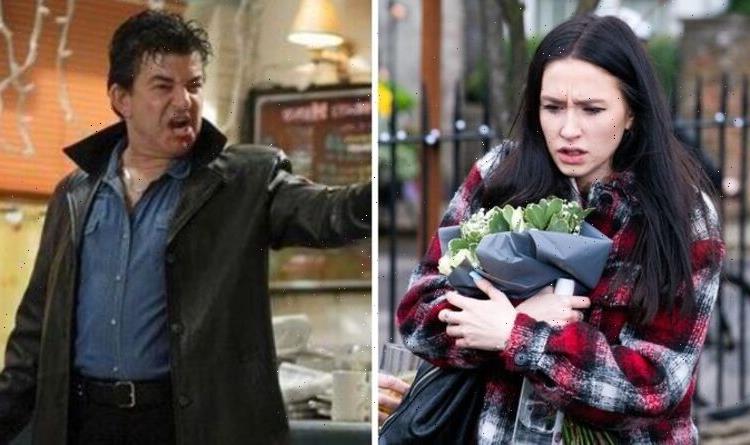 EastEnders: Stacey fumes at her mum for dating Harvey again

Nick (played by John Altman) died of a heroin overdose in 2015, but his mark is still felt in EastEnders. Dotty Cotton (Milly Zero) has always been proud to be Nick’s daughter, but found out on Christmas Day that he in fact wasn’t her father. Convinced she’s a Cotton, Dotty is in denial about her identity and is struggling to accept the news. Could things get even more complicated if Nick’s real love child decides to turn up on the BBC staple?

During an argument, she broke the news to a heartbroken Dotty, who didn’t know whether to believe her unreliable mother.

“Spouting off about Tom Cotton, you don’t even know the whole story,” Sandy fumed.

She continued: “We could have milked that secret for years.”

“Is that all you care about?” Dotty asked. “The money? Mum, what about the way that he treated you?”

Sandy replied: “And that’s why you blew it? Defending me?”

“I had to wipe that smile off his face,” Dotty explained.

Sandy yelled: “Look at you, you are so stupid,” to her tearful daughter.

She added: “You’re weak, so pathetic, just like your dad.”

“My dad wasn’t weak,” her daughter responded, chasing after Sandy as she tried to walk away.

“He showed me more love than you ever have,” Dotty argued. “To think I wasted all that energy worrying about you!”

Sandy raged: “You don’t have to anymore because I can sort myself out.

“Since we’re confessing things, I think it’s time you heard my secret.

“This Rocky, of course he ain’t Sonia’s dad, he’s yours.”

Stunned, Dotty asked: “What?” and accused her mother of lying.

Nick was away from Walford from 2001 to 2008, where he came back to the Square with a young Dotty.

He didn’t give away too much about what he had been up to in that time other than lying that Sandy had died.

It’s possible Nick did believe Dotty was his child, not knowing that Sandy had cheated on him with his half-brother, Rocky.

But in that time, Nick could have got someone else pregnant.

He was apart from Sandy for years, so he possibly had another girlfriend.

He may or may not have known about the love child that could turn up soon, but it’s not unlike Nick to have big secrets.

It’s possible someone of around Dotty’s age might soon arrive and claim to be Nick’s child.

This is bound to add insult to injury for the troubled woman.

She may decide to arrange for them both to do a DNA test to see once and for all who her dad is.

Will she use the mystery child as a way to find out more about her “dad” though and what he got up to while he was away from Walford?

Perhaps the two will bond and end up being close and the storyline could also leave room for Dot Cotton (June Brown) to return as she gets to know her grandchild.

EastEnders continues on Monday at 8pm on BBC One.

‘Texas Chainsaw Massacre’ Post-Credits Scene Explained: Here’s Where the Franchise Could Go Next