Home » TV & Movies » Eamonn Holmes hits out at Sarah Ferguson over ITV show ‘snub’: ‘Everyone but us’ 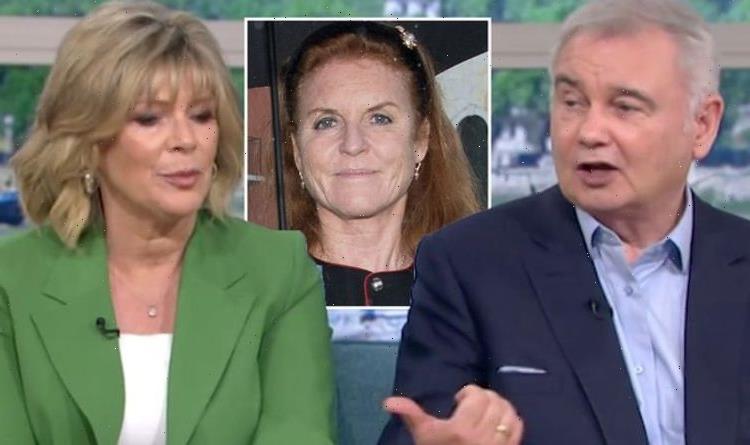 Eamonn Holmes hits out at Sarah Ferguson over ITV show ‘snub’: ‘Everyone but us’

This Morning: Ruth says Sarah Ferguson is ‘snubbing us’

Ruth Langsford and Eamonn Holmes returned to run the show on This Morning on Monday as the ITV presenting duo hold the fort in Holly Willoughby and Phillip Schofield’s absence. And the pair had plenty to get through on the ITV programme, including chats with Coronation Street’s Jennie McAlpine and Samantha, the woman with the biggest mouth in the world. However, it was during a chat with the Loose Women panel that Eamonn became rather annoyed when Charlene White revealed she and the rest of her co-stars would be joined by a royal guest, Sarah Ferguson.

The Duchess of York has been making a number of television appearances in recent weeks ahead of the release of her debut novel.

Sarah’s first book, Her Heart for a Compass, hit bookshelves earlier this month and the royal has appeared on the likes of BBC’s The One Show and ITV’s Lorraine to promote the novel.

Monday saw her join the Loose Women panel to discuss stepping into the world of romantic fiction, but it didn’t go unnoticed by Eamonn and Ruth that she hadn’t appeared on This Morning to share the details.

The moment came after Charlene beamed into the This Morning studio to tease what was to come on the show as she began: “Hi guys!”

Charlene continued: “Now, we’re all on our best behaviour today aren’t we ladies as we’re being listed by royalty.”

A triumphant tune played in the studio as the Loose Women star went on: “We certainly are.

“Yes, Sarah Ferguson, the Duchess of York, is stopping by for a chat about life as a grandma plus why her new romance novel could be about to be made into a movie.

As the camera returned to Eamonn and Ruth, the latter couldn’t resist teasing her co-stars: “Oooo, look at you with royalty.”

Ruth thanked Charlene but before moving on with the show, Eamonn spotted the chance for a moan.

Taking aim at the Duchess of York, a disgruntled Eamonn said: “So she’s been on everybody’s show except ours.

“She’s been on Lorraine with Christine [Lampard], she’s on with them. How come they jump out us and miss the middle?”

And Ruth too joined in with the teasing, adding: “She has, yes, what’s happened?

“Why’s she snubbing us?” Ruth said as she began to smirk over her husband’s annoyance.

The pair soon moved on with the rest of the show ahead of Sarah’s appearance on Loose Women.

Elsewhere in the show, the This Morning pair spoke to Jennie McAlpine about her character Fiz’s split from other half Tyrone (played by Alan Halsall) on ITV soap, Coronation Street.

“I mean, originally (I was) disappointed, gutted, it gutted me and Alan,” Jennie said when asked about how she felt reason the scripts which confirmed the characters’ split.

“You two know, most of the time, once you know each other and you get on, it’s like putting on a pair of nice comfy slippers,” she added.

Jennie added: “The thought of not having scenes with him was awful but then when we got the scripts and (seeing) the family and all the scenes of this family breaking up, they were gorgeous and I was chuffed that the writers gave it us to do.”

This Morning airs weekdays at 10am on ITV.

My girl, nine, bathes in a £23 anti-ageing treatment every night – it rejuvenates her