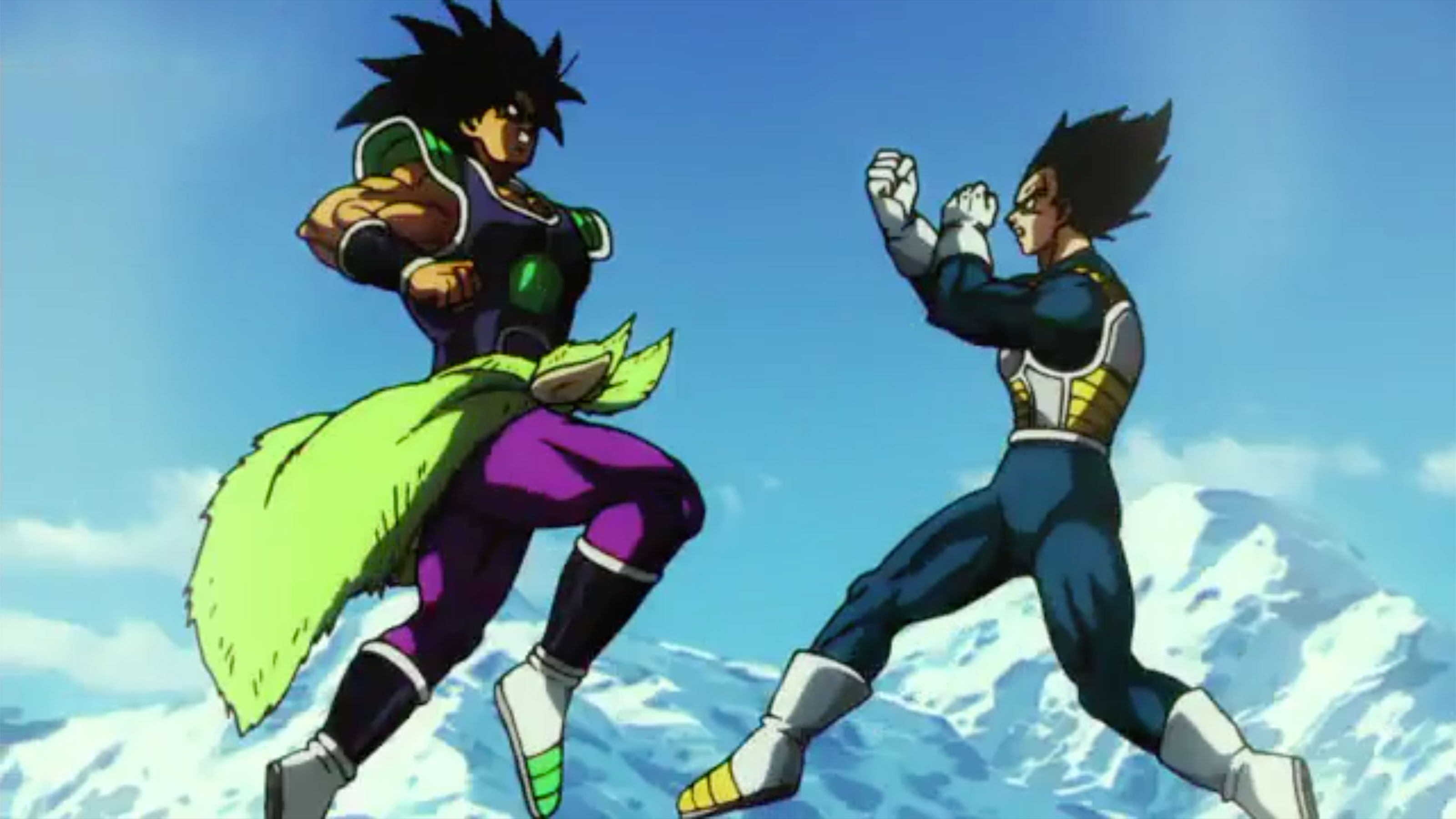 Broly is back — for real, this time.

Broly’s backstory is much more nuanced now, but fans shouldn’t worry; he’s still as powerful as ever. Just check out the exclusive clip above, in which Broly comes face-to-face with Vegeta for the first time. In this movie’s telling, Broly exhibited such incredible power levels as a baby that the Saiyan ruler King Vegeta III sent him to a far-flung abandoned planet where he could never threaten the prince. All these years later, Planet Vegeta has been destroyed, and most of the Saiyan race along with it. Broly survived the genocide thanks to his exile, but when he learns that Prince Vegeta is still alive as well, he comes to Earth to take his long-awaited revenge.

Note: Though this clip uses the film’s original Japanese voice actors, the American release of Dragon Ball Super: Broly will feature the show’s classic American voice actors like Chris Sabat (Vegeta, Piccolo) and Sean Schemmel (Goku), both of whom talked to EW about why they found this movie so exciting.

“It’s definitely a much more mature and thought-out version of Broly. He gets to do some acting, as opposed to just screaming Kakarot over and over,” Sabat tells EW. “Well let’s be honest, it’s still gonna be a lot of screaming on Broly’s part, but you get to at least understand where he’s coming from and feel for him more than you used to.”

Broly isn’t even the only fan favorite Dragon Ball character making his canon debut in this movie. After Broly’s unstoppable power proves too much for Goku and Vegeta to handle even in their Super Saiyan God forms, they resort to the Fusion technique. Dragon Ball Z fans will remember the time Goku and Vegeta used the Potara Earrings to combine into Vegito and fight Majin Buu, but this time they use the Fusion Dance (more often utilized by their sons Goten and Trunks to become Gotenks) in order to become…Gogeta.

Like Broly, Gogeta has appeared on-screen before, but only in movies that were not officially part of the Dragon Ball canon. This time he’s for real, and Sabat and Schemmel both say Gogeta is cooler than ever. They would know, since playing a fusion character like Gogeta requires them to combine their voice acting.

“I was never much into Gogeta/Vegito, because I was just focused on Goku,” Schemmel says. “It was always fun to do from a recording perspective and mix my voice with Chris’, but when fans would ask me about Gogeta I’d be like ‘eh.’ I can say this: After this movie i’m a bona fide Gogeta fan. I want an action figure and a T-shirt. It’s gonna blow your mind how badass Gogeta is.”

“We’re really happy that this is the canon version of the character, because over the years we’ve really honed our skills to be able to do that Fusion stuff in a way where it sounds really cool,” Sabat adds. “It’ll be the best-sounding Fusion you’ve ever heard in a Dragon Ball feature. We found this way, by Sean making his Goku voice a little more Vegeta, and me making my Vegeta a little bit more Goku, and trying to mimic each other’s inflections perfectly, it just sounds like one individual being. I think that’s why I like the character so much now. Before, it just sounded like this weird amalgamation of two actors trying to do their own thing, but we really worked hard to do a perfect fusion — in a same way that I guess the characters might.”

Sabat and Schemmel have both been voicing these characters for decades now. In the years since they started, Dragon Ball’s influence has spread across the culture in many ways. Frank Ocean has been known to sing about Majin Buu, and Dragon Ball aesthetic even appeared in this year’s blockbuster Black Panther movie when Michael B. Jordan’s Killmonger character showed up wearing blue-and-silver armor influenced by Vegeta’s classic look.

Dragon Ball‘s influence is also apparent in Sabat and Schemmel’s lives; the franchise is so beloved that, unlike many voice actors, Sabat and Schemmel get recognized out and about thanks to years of appearances in YouTube videos and interviews.

“I owe my whole life to this character,” Schemmel says about Goku. “I’m so married to the character that I forget I’m the character and then get recognized. Three times this week I got recognized in LA: Buying a new phone, going to Guitar Center, and then at the airport. Because I forget I’m the character, people just talk to me. They don’t even introduce themselves, they just say, ‘when’s the movie coming out?’ I was buying this phone and while the guy was setting up he just turned to me and said, ‘busy week, huh?’”

“Occasionally they can be really cool about it,” Sabat adds. “Sometimes they’re super nerdy, and you don’t want to deny someone when they recognize you. You want to play along because it means so much to them, but I like the people who are cool about it, like one time I was going through TSA and some guy just looked at me and went ‘yeahhhh.’ That was it!”

“I had a similar experience — maybe it was the same TSA guy,” Schemmel says. “He told me, ‘you look familiar.’ I was like, ‘I’m waiting for you to figure it out!’ But he couldn’t figure it out, so right as I grabbed my luggage I just put my fingers to my forehead like the Instant Transmission and looked at him, and he just went ‘ahhhh’. Sometimes I’ll compliment someone’s Dragon Ball shirt and see if they recognize it’s me. Our relationships to these characters, it’s fascinating to me than a manga artist in Japan can affect so many people’s lives. We’re the dub actors in America, and we’re proud to bring it to English-speaking people. It’s the reason I’m here on Earth.”