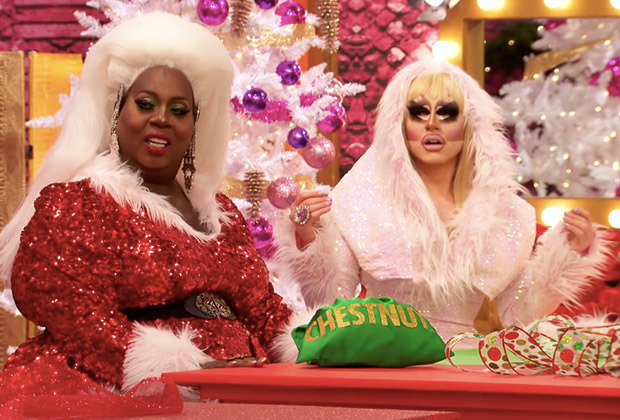 Following a musical introduction courtesy of Mama Ru (because why not?), the fan-favorite queens battled their way through a series of holiday challenges, ranging from a spirited prance-off to an ’80s-inspired group number choreographed by, who else, Todrick Hall.

And while Ru did her best to keep things merry and bright, there was still plenty of shade, especially between All Stars 3 rivals Trixie and Shangela. From the moment Trixie entered the workroom — which she said looked like Shangela decorated it with her own two hands — she was cracking jokes about her controversial win. To be fair, though, Trixia wasn’t the only one trashing the Star is Born actress; upon her arrival, Mayhem shouted, “Damn, who let Shangela back again?!”

Then came the runway: “Non-Denominational Christmas Eleganza!” Stand-out looks included Eureka’s homage to 1996 Holiday Barbie (aka “the Barbie that ate all the other Barbies in the factory”); Trixie’s snow angel, complete with a scepter “to remind people” she’s already royalty; Mayhem’s “dark, mysterious, hairy, horned and hooved” take on sexy Krampus; and Shangela’s considerable upgrade of her “Frostula” character.

After deliberating with Michelle Visage, Todrick and Ross Mathews — not to be confused with the workroom’s elf, who merely looks like Ross Mathews — RuPaul forced the queens to lip sync “for Christmas!” in groups of two: Mayhem vs. Sonique, Shangela vs. Jasmine, Trixie vs. Eureka and Latrice vs. Kim.

In the end, Ru declared that Drag Race‘s first Christmas Queen is… everyone?! That’s right. Everybody won. We can all go home now. Which queen do you think should have won? Cast your vote below, then drop a comment with your thoughts on the holiday special.