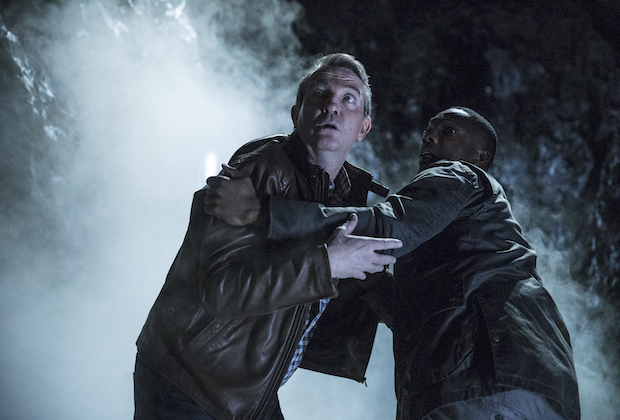 Fall behind? Read our previous Doctor Who recap here.

Jodie Whittaker’s first season as the Doctor came to an end just as it began, with TEAM Tardis taking on Tim Shaw — or, rather, Tzim-Sha, as it was spelled differently in the finale credits. It was satisfying to see the season’s best and most intimidating villain return, hell bent on revenge. But he wasn’t the only one with that particular mission: Would Graham kill Tzim-Shaw if he got the chance to avenge Grace’s death? Let’s recap.

‘WE’RE GONNA RESCUE HOSTAGES, ANYTHING THAT COMPROMISES THEM IS DANGEROUS’ | The hour, “The Battle of Ranskoor Av Kolos” written by showrunner Chris Chibnall, began with a flashback to when Tzim-Shaw landed on the planet Ranskoor Av Kolos rather than his home Stenza planet after his first tussle with the Doctor. Over 3,400 years later, the TARDIS received nine distress signals from that planet, whose name translates roughly to Disintegrator of the Soul. The spaceship the TARDIS landed in was abandoned, save the commander, Paltraki (Mark Addy), who couldn’t even remember his own name until the Doc gave him a neurobalancer like the one she, Graham, Yaz, and Ryan donned to combat the mind-altering waves the planet exposed them to.

Paltraki received a video call from Andinio (played by Downton Abbey‘s Phyllis Logan) and “the creator,” aka Tzim-Shaw, demanding he return a large mineral-looking object he’d taken if he ever hoped to see his three-person crew alive again. Correction, just two of them remained. To figure out what the object was, and why it was so valuable to Tzim-Shaw, the team went on a walk with Paltraki to retrace his steps and mount a rescue.

Graham pulled the Doctor aside to inform her that he was going to kill Tzim-Shaw. The Doctor told him he was better than that; he’d be just like Tzim-Shaw then, and he could no longer travel with her. He didn’t care. It was a cold Graham we hadn’t seen before. As they rejoined the group, the Doctor prepared the team to enter Tzim-Shaw’s giant floating shrine — with grenades and a bomb courtesy of Paltraki’s ship. Her rules change all the time, she told Ryan when he questioned her sudden support of weapons. If it can be rebuilt, she’ll allow it to be destroyed.

‘BRING HER TO ME’ | As always, the team divided up. Graham and Ryan were tasked with finding the missing crew, but first they had to argue over whether Grace would want Graham to kill Tzim-Shaw (Ryan thought not since it meant breaking up the team). They were cornered by armed robots on both sides. Ryan and Graham simply ducked when they began to fire, so the robots took each other out. Clever, yes, but nothing we haven’t seen before.

The Doctor, meanwhile, was on the hunt for Tzim-Shaw but instead came face-to-face with the armed Andinio of the Ux. The Doctor had never met one of the faith-driven dimensional engineers before, but she knew there were only two of them at any given time, found only on three planets in the whole universe. Andinio explained all the fallen ships Team TARDIS had encountered outside: the ships had come for the creator and the Ux defended him. What Andinio couldn’t answer for herself, though: Why did the creator recognize the Doctor and ask to see her?

‘READY HIM, THERE WILL BE A NEW TARGET’ | Tzim-Shaw was happy to lay it all out for the Doctor. He’d ended up on this planet and Andinio and her fellow Ux, Delph, had worshipped him as their never-before-seen god. They used their power to help keep him alive and do all his bidding, believing it was not their place to question the creator. He abused their blind trust and combined his Stenza tech know-how with all their juice to not only hold people in stasis as trophies, but also whole civilizations. Paltraki and Yaz had discovered four more objects like the one they’d found on Paltraki’s ship — inside each was a planet that Tzim-Shaw had used Delph and Andinio to miniaturize and encase. That had been why Paltraki’s crew was sent to Ranskoor Av Kolos, along with others whom Graham and Ryan found floating in large single pods. Tzim-Shaw gave Andinio and Delph the order to target Earth next. He wanted to hit the Doctor where he knew it’d hurt her most.

‘YIPPEE KI YAY, ROBOTS’ | Graham and Ryan had 30 people to free with two slow code-breaking devices, but all Graham really wanted was an excuse to leave so he could go try to find Tzim-Shaw. Ryan saw through it and reminded him that they’re family now — he even told him he loved him — and that Gran had always told Ryan he had to be the better man when he was angry. Graham pretended the talk worked, and the two of them started opening the chambers, which sent off an alarm for Tzim-Shaw. He unplugged himself from whatever equipment was attached to him (he needed help breathing, or did he just need a full charge?) and marched off to find them.

The armed robots reached Graham, Ryan and those they’d rescued first, but Paltraki got his hero moment and took care of them. Ryan left to help lead people out to Paltraki’s ship while Graham stayed behind so he could quote Die Hard‘s John McLane and use explosives on the next group of robots. Graham got a surprise when Tzim-Shaw walked through the blown door. Graham pointed a weapon at him, but he ultimately couldn’t take the shot. He wasn’t a warrior; he was the better man. Still, when Ryan returned to check on Graham and Tzim-Shaw threatened his grandson, Graham got to shoot him in the foot to shut him up. The men bumped fists, then realized they had no idea what to do now. The answer: they sentenced him to life in one of his stasis chambers. “As you are contemplating eternity, keep one name on your mind: Grace,” they told him. Well done, gentlemen.

‘COME ON, FAM’ | Of course, we haven’t gotten to how the Doctor literally saved the world. She and Yaz took off their neurobalancers and put them on Andinio and Delph so they could talk sense into them and prove Tzim-Shaw was a false god. The five planets were beginning to crack their containers, so they had to get them back to their places in the universe quickly. The Doctor summoned the TARDIS and it helped the Ux deliver them safely with its telepathic circuits. Never underestimate the TARDIS (as the Doc said, referencing feats from previous seasons, “I once towed your planet halfway across the universe with this TARDIS, and turned a Slitheen back into an egg”).

Graham and Ryan finally rejoined the group, and Graham told the Doc he’d had his chance with Tzim-Shaw but he was “too weak.”

“Graham O’Brien, you’re the strongest person I know… Well, one of the few,” she said.

As fitting as it was that the season’s arc built to that moment, it wasn’t the Doctor’s final line. At Delph’s urging, he and Andinio were now going to do some traveling so they could understand what was out there and find another home.

“None of us know for sure what’s out there. That’s why we keep lookin’,” the Doctor told them. “Keep your faith. Travel hopefully. The universe with surprise ya. Constantly.”

And then she joined her “fam” inside the TARDIS.

What did you think of “The Battle of Ranskoor Av Kolos”? Did it pack the emotional punch you expect from a Doctor Who season finale? Do you think that shrine will be able to hold Tzim-Sha, or will we see him again? And how excited are you for Whittaker’s Doctor to return in 2020? Hit the comments, and we’ll do it again for the New Year’s Day special.

CIA Spy Imprisoned In Russia Seeks Help From Trump: 'My Family Is In Danger'
World News