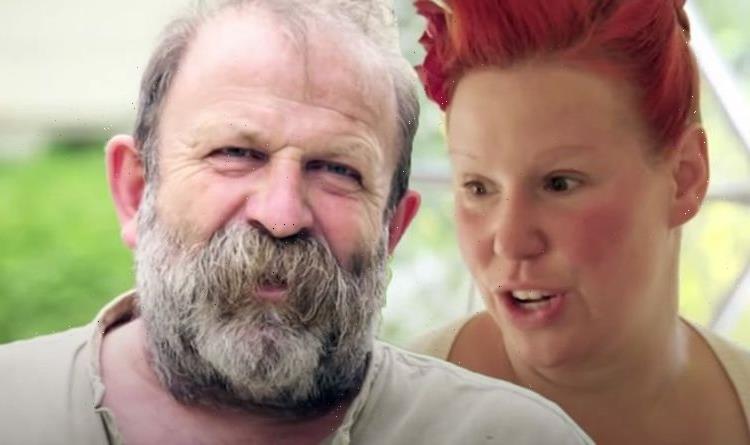 Angel and Dick Strawbridge realise the chateau is wonky

Over the years the couple have shared their journey as they brought the dilapidated building back to life but Dick Strawbridge got in trouble when he gave a little too much information about the transformation away. Celebrating the release of their book, A Year at the Chateau earlier in the year, the former Lieutenant Colonel revealed how Angel Adoree wasn’t impressed with some of the renovation details he shared with Escape to the Chateau fans.

In the book, Angel’s entries to their diary-like memoir are in bold so readers can distinguish between the couple.

Talking about the differences between their entries to Graham Norton on his Virgin Radio show, Dick revealed he was scolded by Angel over how detailed he could be.

“There’s a big difference in how we work together you see because the horsepower and some of the things that aren’t quite so interesting, I got into so much trouble for writing so much about toilets in October,” Dick revealed.

“Apparently that’s not what people want to read about but it’s really important.”

Angel laughed: “I fell asleep reading that in October.”

Graham continued: “So you started work on it in 2015 and it’s now 2021, that’s the thing with a building like this, it’s never finished. But how much, is there a big job left?

“Do you wake up in the morning and think, ‘Oh we’ve got to drain the moat or do something?’”

“We’ve got to do that actually, you’ve hit on something I’m trying to ignore,” Dick explained.

“This year is a different year again because we’re still locked down here in France so we’re locked down and haven’t had the easing we’ve had back home so consequently, it’s quite different.”

“We have got some big jobs to tackle if we are honest with you,” Angel added. “We’ve still got the roof to do which is obviously an massive one and we still haven’t done the windows properly.

“They’re still being plastered over. We’ve also got things like we’d like to have a swimming pool.”

In the most recent series of Escape to the Chateau, viewers saw Dick and Angel tackle a number of tasks they’d put on hold.

With the coronavirus pandemic putting a stop to events and weddings they were able to transform an old bath house, repair the Orangery and even redecorate some of the rooms.

However, Dick wasn’t too happy with all of wife Angel’s demands as she asked for a much larger decking for their riverboat than expected.

“I’ve got a vision and that will scare the heebie-jeebies out of Mr Strawbridge,” Angel confessed before telling her husband: “I am genuinely more worried about kind of decking and areas because that needs to be all-singing, all-dancing.”

Dick asked: “How wide an area do you see it being? My question is, how much space do they need on the decking?”

“Three meters, four meters,” Angel replied but Dick hit back: “You’re not getting that.”

Escape to the Chateau is available to watch on All 4.