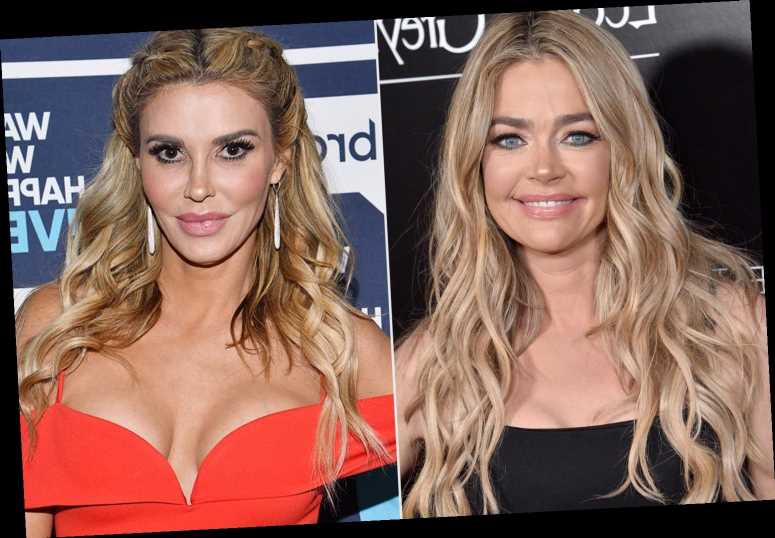 The Real Housewives of Beverly Hills has wrapped its 10th season — but that doesn't mean the drama has ended.

During Wednesday's finale, Dorit Kemsley invited the diamond-holding ladies and their significant others to her new home for a housewarming party. All of the Housewives attended the December bash aside from Erika Girardi, who was in New York for her role as Roxie Hart in Broadway's Chicago, and Denise Richards, who has spent the last few episodes vigorously denying rumors that she had sex with Brandi Glanville.

Despite their plans to ride to the party together, Garcelle Beauvais ultimately went to the party without her after waiting outside of her hotel in vain.

"I was texting with [Denise]. She said she was coming with Garcelle. So she's not with Garcelle," Lisa Rinna told Sutton Stracke when Garcelle walked in the door with her then-boyfriend, Michael, and not Denise.

"I was supposed to meet up with Denise, and she's a no-show," Garcelle, 53, told her costars at the party. "I've been calling her. Her phone goes straight to voicemail. Nothing." To Lisa, Denise's absence was "strange, because I had been reaching out to Denise saying, 'You need to come tonight. We need to work through some stuff.' And she said, 'Don't worry, of course I'm coming,' " she said in a confessional.

Lisa proceeded to text Denise, 49, while Dorit, 44, attempted to call her, but the call went to voicemail. "Her phone's off. Or she's blocked me," Lisa said at the housewarming.

Although Denise didn't attend, Brandi made a surprise appearance, coming as Kim Richards' plus-one. When Dorit mentioned she was shocked Denise hadn't shown up, Brandi admitted that she had texted Denise, warning her she'd be in attendance.

"I was like, 'I'm gonna see you tonight.' I assumed she would be here, so I sent her a text giving her a head's up. I think if her and I could just sit down together and have a conversation without everyone involved, it's just no one else's business," Brandi, 47, told Dorit. Brandi also said that she and Denise had texted since the women returned from their cast trip to Rome, where the Housewives had confronted Denise about Brandi's claims.

"I said, 'First you make me a cheater, then you make me into a liar. What the f— are you doing?'" Brandi said.

Later that night, Garcelle spoke with a producer about Denise as she left the party. The producer disclosed that Denise's husband, Aaron Phypers, had texted production to say there was a "family emergency."

"That's not cool," Garcelle said, feeling stood-up by her friend.

"You're the one defending her and now she bails on you," the producer said. "It's ridiculous."

Later on, Garcelle, Dorit and Lisa met up for dinner and discussed the housewarming party. Though Dorit and Garcelle said that they had heard from Denise, Lisa had not.

And "in the following days, Denise sent cease and desist letters to cast and producers," the show announced. Two weeks later, Denise and Lisa finally had a sit-down conversation, and the Wild Things actress admitted that the "family emergency" was a lie.

"Did you know that Brandi was going to be [at Dorit's party}?" Denise demanded.

"I did not," said Lisa, who proceeded to ask Denise if she knew.

"Yes, I did," Denise said. "That is why I didn't show up. I did not want to go and have her create some Jerry f—— Springer moment."

When Lisa asked, "So there wasn't a family emergency?" Denise confirmed, "no there was not."

Lisa went on to call out Denise's lie: "The reality is you said family emergency. You lied. That's a lie."

Denise asked Lisa why she didn't believe her side of the whole story. "I don't know exactly what I believe, to be really honest with you," Lisa replied. She brought up Teddi Mellencamp Arroyave's baby shower from the previous episode, when Brandi passed around her phone to show the women "proof" of her close relationship with Denise.

"I witnessed something that really confused me," Lisa said. "You have had a long relationship with Brandi Glanville. Platonically or whatever, because you have a very long text message chain with her, Denise."

"I don't care what texts she has," Denise said. "My interaction with her was very limited … I've seen her four times in my life. She was an acquaintance! That was it!"

In a confessional, Denise claimed that Brandi could have had altered their text messages."There is an app that can revise text messages, so whatever Brandi has, I don't even care," she told the camera.

"If I'm going to be put in a corner where I have to present text messages, not only will I present Brandi's, I will also present Lisa Rinna's and I don't think either one of them want me to do that," she added. "But I will."

Denise denied having spoken to Brandi since Rome. But she did confirm that she had sent a cease and desist, as Lisa has been teasing on social media lately.

"Let me ask you a question. This is none of my f—ing business, by the way. But we don't understand why you wouldn't pick up the phone and say, 'What the f— are you doing?' " Lisa asked on the show. "Why would I engage in that?" asked Denise, promising, "it's being dealt with."

"So you sent a cease and desist?" Lisa asked. "You wanted the footage taken out."

Visibly upset, Denise pointed her finger at Lisa. "No, you are playing dirty," she said. "This is slanderous. If something was slanderous about you, wouldn't you send a cease and desist?"

"I don't know," Lisa admitted. "I have shown up and I have dealt with the people that I've needed to deal with."

"And I have too," Denise insisted.

In a confessional, Denise acknowledged that as an ex-wife of Charlie Sheen, she is no stranger to salacious headlines. "This isn't the first time there's been something about our family in the press, and whenever there is, we just have to rise above it, hold your head up high, this too shall pass, and not let the outside noise affect us," she said.

"And thank God we have a very solid marriage," Denise added of her husband. "Had we not, this could be a very different situation."

The season 10 reunion of The Real Housewives of Beverly Hills premieres Sept. 2 on Bravo.