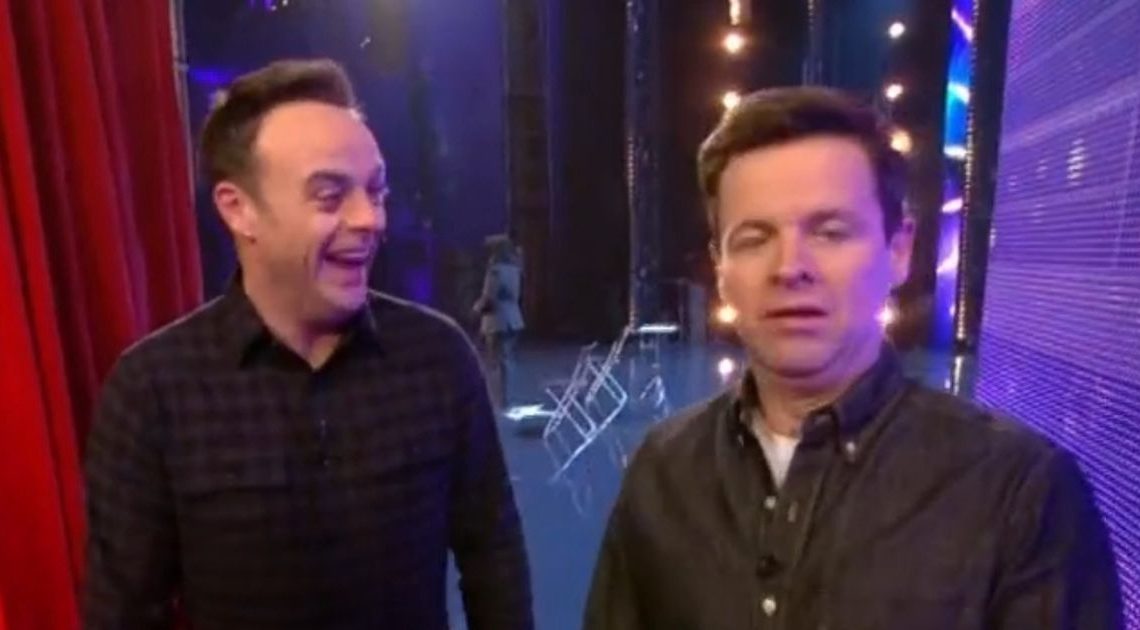 Declan Donnelly was gobsmacked on tonight's Britain's Got Talent when Ant McPartlin made an awkward joke about his wife.

The Geordie duo were waiting in the wings as a mysterious masked performer took to the stage.

The silent magician did not utter a word, refusing to speak to Simon Cowell, which left Ant and Dec guessing who they might be.

Cheeky Ant used the opportunity to crack a gag about the identity of the BGT hopeful.

He said: "Imagine at the end they take off the mask and it’s someone we know. Like your wife."

Stunned Dec pulled a face after Ant's joke about his wife, Ali Astall.

Pretending to be furious, Dec shouted: "What!"

The giggling presenter, who clearly saw the funny side, said: "Now that would be a shock."

Body-language expert Judi James has had her say on the awkward moment.

Speaking exclusively to Mirror Online, she said: "Ant just about got through one sticky moment when he said the masked magician could be anyone when the mask comes off, adding to Dec that ‘It could be your wife’, clearly trusting that the very obvious banter-ish reply of ‘It could be yours ’ wouldn’t come out to bite him on the bum."

The masked magician tested their "undeniable bond" by seeing if the pair had telepathic powers.

Ant was touched on the shoulder, but Dec also felt something in a very spooky moment.

They then both drew an identical squiggle on a board that, when turned upside down, appeared as 1989 – the year they got together.

Amazed Britain's Got Talent viewers took to Twitter after the astonishing moment.

One viewer said: "Omg wow what an talent with Ant and Dec very very clever ! goosebumps upon goosebumps"

"Wow. How on earth did he manage to make them draw the same thing?! Great background to the act as well," added another.

A third said: "WOW. To firstly touch Ant and for Dec to feel it BUT THEN to close both their eyes, and ask them to draw, and they both drew the exact SAME thing, and upside down it said the year they first met. Just incredible and what's more amazing is the bond Ant and Dec have."

*Britain's Got Talent airs Saturdays on ITV at 8pm

Game of Thrones: A Reminder of Who Arya Has Killed From Her List and Who's Still Left