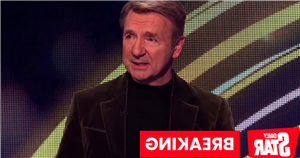 Dancing On Ice star Christopher Dean has been rushed to hospital after suffering a very nasty injury on the ice.

The ice skating icon confirmed he has broken his pinky finger, sharing a wince-inducing snap of his bandaged finger with fans.

He wrote alongside the snap: "Yes broken [grimacing face]."

READ MORE: Jake Quickenden had 'so many' groin massages Dancing On Ice masseuse questioned him

Confirming how he had suffered the nasty injury, Christopher joked he'd been practicing the Iron Lotus – a fictional ice skating move made famous in the comedy film Blades of Glory.

He penned in a follow-up tweet: "We were trying the Iron Lotus, but ended up doing a Half Nelson. Or did I just fall over a suitcase in the middle of the night?" Chris later shared a mirror selfie, in which he could be seen in a khaki fleece holding up his injured digit to the camera.

His fans were thankfully there to rally round him, with one wishing Christopher a "speedy recovery".

Someone else echoed: "Oh no ouch!!! Feel better soon!"

"Oh no, really hope it recovers and heals soon. I bet it hurts… I did the same in the summer and now have a recovered but wonky little finger. Hope you are still able to skate… but very carefully!" a third fan followed up. It comes just days before the launch of ITV skating competition Dancing On Ice, in which Christopher stars – throwing the new series into chaos.

It isn't his only health scare this year, as in January Christopher feared he would be diagnosed with bowel cancer after a polyp was found in his bowel.

He admitted: "Not knowing if I was going to live or die – it was a scary prospect being faced with my own mortality.

"My doctor was convinced I had an adenoma or adenomatous polyp." Thankfully, the polyp was later found to be benign.

Christopher said: "I can’t tell you the relief I felt and it really did help me put things into perspective."

Dancing on Ice has already been hit with numerous injuries so far this year, with Darren Harriott suffering a horrific whiplash injury while practicing a lift.

The Love Island: Aftersun star confirmed back in December: "Soooooo… I fell backwards yesterday on the ice near the end of my lesson and I now have whiplash.

"I can't turn my head properly or raise my left arm. This is a big week for everyone on Dancing on Ice because it's promo filming and show and tell so I'm gutted."

I'm pregnant & four members of my family already have the same first name – who cares, my daughter’s getting it too | The Sun