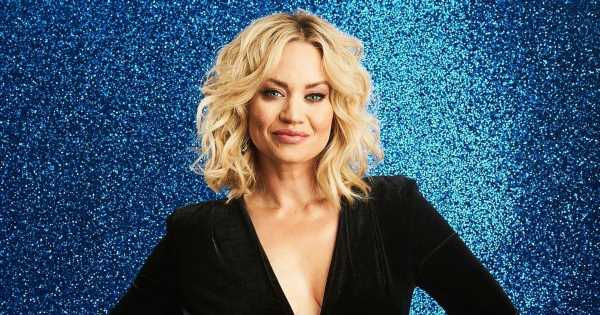 Ryan, 37, who was a corrie regular for 16 years, took to his social media to share that he will be supporting both Sally and Kimberly and also confirmed this on the Sunday evening show.

But fans were clearly baffled with Ryan and Kimberly's connection and wanted to find out how they knew each other.

Taking to Twitter, Dancing On Ice viewers shared their thoughts on the unusual connection.

One fan asked: "Are we all wondering how Ryan Thomas knows Kimberly Wyatt?"

Luckily another spectator was on hand to demystify the confusion. Replying to the original question, the person penned: "Good friends with her husband, apparently."

Kimberly's husband Max Rogers is a British model who has worked with some huge luxury brands including Diesel, Dolce & Gabbana and Tommy Hilfiger.

The star previously appeared as a judge on Britain's Next Top Model and has been on the cover of Italian Vogue and GQ Style.

In May 2021, Kimberly took to her Instagram to demonstrate her support to Ryan as he embarked on a charity walk for Mental Health Awareness Week.

Sharing a picture online of herself and her two children supporting the corrie legend, Kimberly penned: "Proud Mum moment!

"Our very good friend @ryanthomas84 is walking from London to Manchester in honor of #mentalhealthawarenessweek for @calmzone and today we joined him!!!

"This was the moment we stood in solidarity with Ryan as a family and showed our support in his brilliant effort on day 3 of walking 10 marathons in 10 days!!!"

The excited mother-of-three also expressed her happiness with sharing the news with her children on why Ryan was taking part in the charitable event with her kids.

She continued: "What an incredible conversation to have with our girls about why he is doing it and what mental health is all about.

"How cool to get to see him in action and show what charitable efforts can do for others whether it’s raising money, awareness or bringing people together to make a difference.

"Willow’s sign says: 'Ryan I see you are in pain their is only 7 more days to go Ryan. Wow you are so amazing! Love Willow."

She added: "Ultimately I realized today that when you are surrounded by friends and laughter all your worries seem to disappear even if only for the moment. When you know you’re not alone and you are loved and supported – you find comfort.

"As Ryan and I chatted during his epic journey today we chatted about the fact you never know what someone is going through….. just Be Kind!!!!"