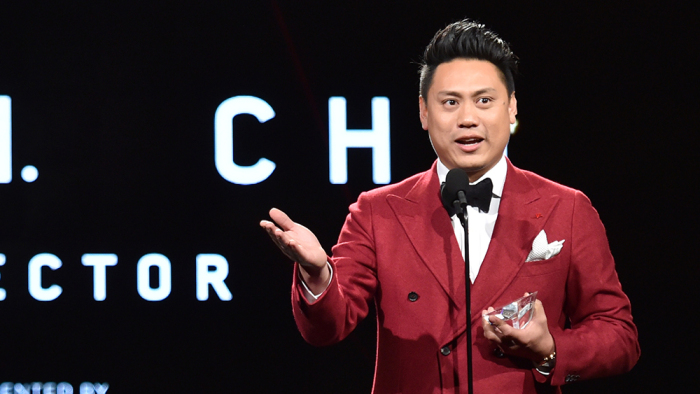 ‘Crazy Rich Asians’ Honored at Unforgettable Awards: ‘One Movie Every 25 Years is Just Not F—ing Enough’

Fresh on the heels of its Golden Globe nomination, “Crazy Rich Asians” was the talk of the evening at Kore Asian Media’s 17th annual Unforgettable Awards.

Saturday’s event, which celebrates Asian-American trailblazers and their achievements in the entertainment industry, honored a host of Asian actors, directors and influencers, including “Crazy Rich Asians” director Jon M. Chu, who took home the evening’s Director Award and Vanguard Award alongside author Kevin Kwan and several of the film’s cast members.

“I am proud to say the state of our union is strong and getting stronger because this movement is making waves…and it’s not someone else doing it; it’s us.” Chu said during his acceptance speech at the Beverly Hilton Hotel. “Our community is power, and we are powerful. We don’t need affirmation every again, and I didn’t do that. Our movie didn’t do that. Truly, our movie is a result of this room.”

On the carpet, Chu said he never dreamed of the type of Asian-American representation he’s seeing today, let alone a Golden Globe nomination for a film with so many Asian characters. “When you’re brought into a system where it doesn’t exist, then you don’t know that it should be existing,” he told Variety before crediting the Asian community for inspiring him to create the film in the first place.

While Chu didn’t say much about  the film’s upcoming sequels, he said viewers can count on the return of Harry Shum‘s (“Glee”) character Charlie Wu, who appeared during the film’s closing credits as Astrid’s future love interest. In the books, Charlie Wu is Astrid’s first love, and Chu said he can’t wait to show off Shum’s acting chops in the new role.

Later on in the evening, Kwan echoed Chu’s statements about the rise of Asian representation in the entertainment industry before sharing the inspiration behind the literary version of “Crazy Rich Asians.” It was a story he wrote for himself, he said, so seeing it celebrated by so many community members was a little surreal.

“I feel like compared to all of you I’ve been a really bad Asian. Seriously, because I never felt like I was in any way was going to represent my community,” he said. “So I did all these things never wanting to express this little secret part of me until one day my father died, and I realized I had a story I wanted to tell.”

But despite the film’s success, Kwan said Hollywood still has a long ways to go in terms of Asian representation. The last film to feature such a huge Asian cast was “Joy Luck Club” in 1993, and according to Kwan “one movie every 25 years is just not f—ing enough.”

The evening also honored a variety of cultural influencers and social justice advocates including Amanda Nguyen who was awarded the Culture – Social Justice Award for her work with the Rise foundation, Livi Zheng who received the Culture Ambassador Award for her film “Balie: Beats of Paradise,” celebrity jeweler Ben Baller who won the “Culture – Lifestyle Award,” workout instructor Cassey Ho who received the Digital Influencer Award and U.S. Open winner Naomi Osaka who was awarded the Athlete on Another Level Award.

In between speeches, a variety of performers took to the stage, including singer-songwriter Judith Hill, beatboxing group KRNFX and young adult dance group The Lab.

Queen's former driver attacked boy, 10, at Buckingham Palace but died before charges could be brought