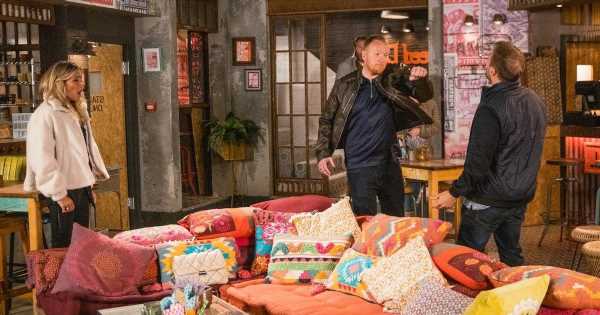 Corrie spoiler: Fists fly when Tyrone’s chatted up by a very familiar face for soap fans!

Tyrone's cut a lonely figure since his romance with Alina ended and Fiz made it clear she's not looking for a reconciliation.

This week the mechanic finds himself getting attention in an unexpected place. But Tyrone (Alan Halsall) ends up paying for his admirer's interest, when he's on the receiving end of a punch!

The trouble starts when Ruby is invited to a party but her step-sister Hope isn't, and Tyrone tells the party hostess that he's not impressed with her attitude to Hope.

His stand catches the attention of another school mum Isla, (played by former Emmerdale star Gemma Oaten aka Rachel Breckle). But when the pair then go on a date, Tyrone's in for shock when her husband arrives and punches him!

Meanwhile, poor Kelly’s not having much luck. She may have been released from prison, but this week she finds herself homeless. Trying to find shelter, Kelly sneaks into a hotel foyer, where a man staying there offers to help her. Is she putting herself in danger?

Later, Aadi – who's still licking his wounds following what he sees as rejection by Dev – offers her a place to stay. But when she overhears Asha talking about her, proud Kelly lies and says she’s off to stay with her mum. How bad is her situation set to get?

And it's a truly sad day for the street as it's time for Johnny’s funeral, following the heroics that proved fatal when he tried to save Jenny.

Broken by her loss, a struggling Jenny manages to push everyone away. But there’s a surprise later when the contents of Johnny’s will are revealed.

And Jenny of course isn't the only one struggling to come to terms with the events of that fateful week.

In the wake of Natasha’s death, poor Sam is still unable to speak. Leanne tries to encourage him to write down happy memories of his mum, but the plan does little to pacify the lad who sadly slopes off to his room.

Later, however, there’s a crisis when Sam finds himself locked out on the balcony, while inside the flat he sees young Lily choking on a lollipop. Can he break his silence to shout for help?

Elsewhere Debbie comes up with a plan that she thinks might free Faye Windass from prison. She heads to jail to speak to Ray Crosby and offers him a deal – but how will he react to what she has to say?

Coronation Street airs on Mondays, Wednesdays and Fridays on ITV