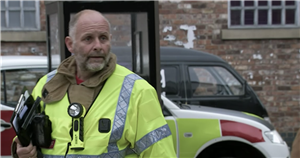 Coronation Street fans were left in fits of laughter on Wednesday evening, as Tyrone Dobbs sought advice for how to get the smell of fire out of his flat.

His girlfriend Alina Pop had been the only one in the flat when smoke began to waft into her bedroom – but was thankfully rescued from the blaze by paramedics.

Fans are theorising that Tyrone's daughter Hope could be behind the fire, after she stole the keys to her dad's flat and snuck out of her house at night.

On Wednesday, a fire crew attended Ty's house to try and determine the cause of the blaze – theorising it began with a lit candle.

And Tyrone quickly asked: "How do we get rid of the smell? It stinks in there."

The firefighter replied: "Give it a good airing. Open the windows, spray some air freshener."

But this response had fans in hysterics, as they added their own suggestions to the list.

"Just spray a bit of Febreze Tyrone!" one suggested on Twitter.

"Fireman on #Corrie told Tyrone to open the windows and spray air freshener to get rid of fire & smoke smell. You need to wash the walls FFS!" another tweeted.

A third fan echoed: "Air freshener. I think it will take a bit more!"

"'How do we get rid of the smoke?' 'Open the windows'. Weatherfield Fire Brigade blinding us with science there #Corrie," another penned.

Others were more worried about the giant photo mock-up of Alina and Tyrone, which she'd had commissioned of the two leaning against a car in the garage.

"Omggg does the fire mean that hideous picture of Ty and Alina has been finally obliterated?" one fan wondered on Twitter, as another shared a picture of the canvas with the caption: "I hope to god this has been saved!"

But the storyline soon devolved into tragedy, as Alina began experiencing stomach pains and bleeding at hospital.

A nurse eventually told her that the baby's heartbeat had stopped – and that she was miscarrying.

A devastated Alina blamed herself for the fire when Ty revealed it was her candle that had started the blaze, and it was down to Evelyn to inform the girls that they would no longer be getting a baby brother.

Hope immediately wanted to know if the news meant her dad would be returning home – and stormed out of the room when Evelyn told her that Ty would be going back to the flat with Alina.

"You should have made him come home!" the little girl shouted at her great-gran.

If you have been affected by this story, advice and support can be found at Sands (stillbirth and neonatal death charity). You can call them on 0808 164 3332 or email [email protected]