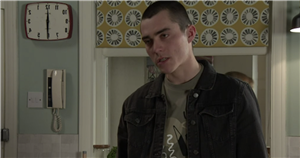 Happy couple Seb and Nina were waling along the canal when they came across Corey and his evil gang.

After nasty jibes were made, the pair decided to walk away but the group chased them in horrifying scenes

Seb and Nina found themselves subject to an unprovoked and vicious attack.

Just before the brutal assault, Seb recorded a voice message for his mother Abi (Sally Carman) who was busy enjoying her hen party ahead of her wedding to Kevin.

The emotional bride to be listened to the beginning of Seb's voicemail during Friday's episode but didn't manage to listen to all of it.

Viewers are convinced that Corey will be exposed when Abi eventually hears all of the audio message.

Taking to Twitter, one fan penned: "Abi listen to the whole voicemail and it will have them scumbags voices on."

Another added: "Abi should have listened to that voicemail a bit more, maybe she’d know who did it then.'

"I hope Abi listens to Seb's voicemail before he got attacked," a fifth viewer typed.

As Roy Cropper (David Neilson) and Abi rushed to hospital, Corey covered his tracks and assured girlfriend Asha Alahan (Tanisha Corey) that he knew nothing about the attack.

Nina came around during the latest visit to Weatherfield and revealed that she remembered seeing Corey before the attack.

Abi marched back to Coronation Street from the hospital and confronted Corey in front of a shocked Asha.

The distraught mother demanded to know exactly what happened to her precious son and his girlfriend.

Corey lied and told Abi that he knew nothing about the incident.

Coronation Street spoilers have revealed that Corey forces Asha to lie to the police about his involvement in the attack in upcoming scenes.

Will the youngster risk being in trouble to save her boyfriend or will she finally see Corey's true colours?

Coronation Street airs Mondays, Wednesdays and Fridays on ITV at 7.30pm and 8.30pm

Britain will be 'Covid free by August' and booster jabs can be delayed until next year, claims vaccines boss
World News