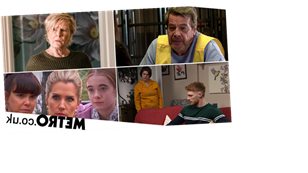 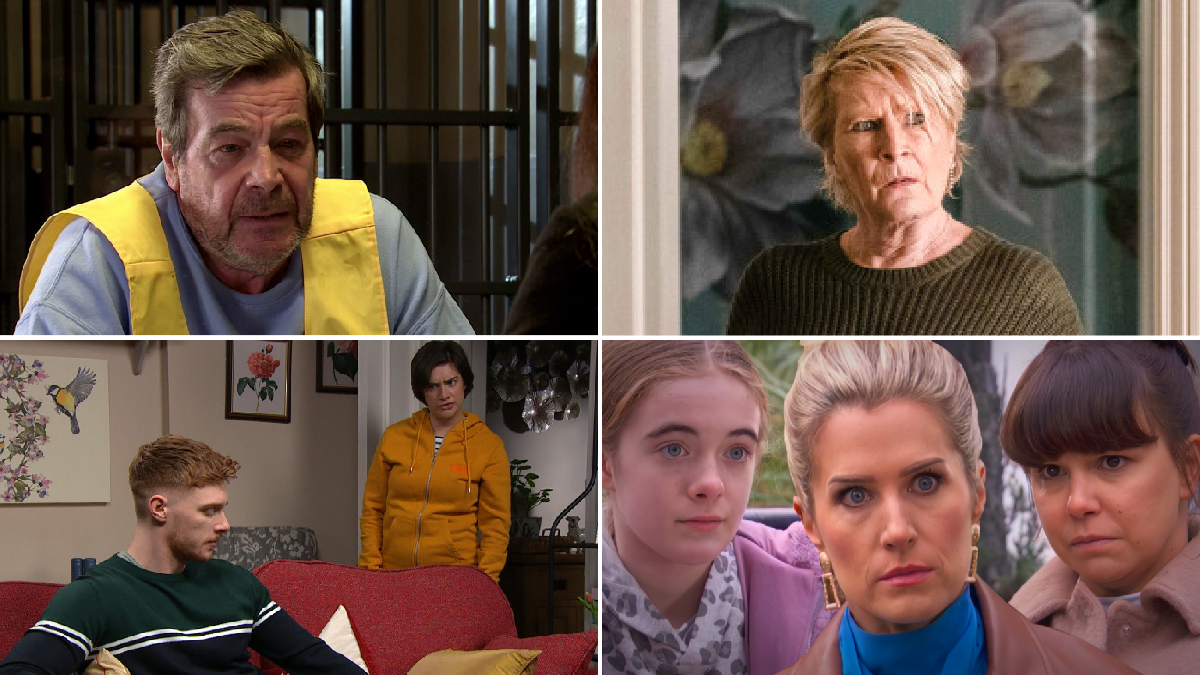 Next week brings with it drama aplenty in the land of soap.

It’s a tough week for many a resident in Coronation Street, including Debbie and Kevin Webster (Sue Devaney and Michael Le Vell), who are left fighting for their lives, as they’re left trapped in the fridge at the bistro.

Meanwhile, Mick and Shirley Carter (Danny Dyer and Linda Henry) are left in shock in EastEnders, as DI Arthurs reports that Tina (Luisa Bradshaw-White) has been spotted.

Is she still alive?

Luke Posner (Max Parker) opens up to Victoria Barton (Isabel Hodgins) in Emmerdale, and reveals that he slept with a man.

And last but oh so not least, Nancy Osborne (Jessica Fox) finds herself on a mission to find out what really happened to Jordan Price (Connor Calland) in Hollyoaks.

It’s a week that you most certainly won’t want to miss down in soapland, and if you fancy a little taster of what’s on offer, then you’ve come to the right place, as we’ve got you covered!

1. Fellow prisoner Joe asks Johnny if he’d like a game of pool. Johnny declines, but he’s letter left heartbroken, as he learns that Joe overdosed. Jenny’s is worried, as she fears Joe’s death will bring back dark thoughts of Aidan, while Johnny imagines that he can see a bloke in a suit, and he later sees mice and cockroaches. What’s more, he thinks he sees Aidan.

2. David and Tracy start a bidding war over No. 8. The bidding reaches £138,000, and Steve forbids Tracy from going higher. Tracy is livid, but both she and David are equally shocked to discover that the final bid — of £138,000 — was placed by a mystery buyer. Back on the street, David spots a light on in No.8, and therefore he and Shona knock on the door.

3. Abi comes clean to Kevin about what she knows about Ray, admitting that Debbie told her she murdered the hotelier in self-defence. Kevin informs Abi that he doesn’t trust Debbie, and suspects that she’s lying.

4. Ray disguises himself as a bistro workman in an effort to find out what’s going on. He overhears Debbie discussing her plans with Miles, and confronts her, telling her that he knows what she’s up to. He forces her into the walk-in fridge and attempts to lock her in.

5. Kevin hits him over the head with a frying pan and tries to rescue Debbie from the fridge. However, the door slams shut and Kevin and Debbie soon realise they are both locked in the fridge.

6. Fiz asks Tyrone to look after the furniture shop, but when Alina invites him for a coffee, he leaves the shop unattended. Upon his return, he finds a guy called Leon helping himself to furniture, who assures him that Fix knows all about it. However, this isn’t the case, as Fiz returns and is shocked to find the shop half-empty.

7. Leanne finds a feather, and she’s delighted. She shows Simon the feather, and reveals that she believes it’s from Oliver, and is a sign that he’s at peace.

8. Everyone is incredibly concerned about Denise’s disappearance, and Chelsea is especially panicked.

9. Kush tells Whitney that he’ll take the spare room. As Valentine’s Day approaches, he asks Whitney on a housemate date, and they sit down with an accidentally heart-shaped pizza — just as the power cuts out.  They share a moment, and before long, they ultimately kiss.

10. Max looks after baby Abi, and he begins to reminisce about her mother. He spots a flyer for a clairvoyant and, ultimately, he makes the decision to go and meet with her. As he does so, he becomes emotional and ultimately breaks down — as he doesn’t know what to believe.

11. DCI Arthurs informs Mick and Shirley that someone matching Tina’s description was spotted shoplifting. She gave her name, but then ultimately made a run for it. Mick is relieved that Tina is okay, but Shirley beats herself up for letting Tina down. Desperate to track her sister down, Shirley sets off in search of her.

12. Kathy is stressed over Ian’s disappearance. Bobby suggests she see a doctor, but Kathy is admant Sharon must pay for what she’s done.

13. Mick goes to the station to go over his statement about Katy.

14. Sharon sits on Dennis’ bench — morning the loss of her son, all the whole celebrating Albie’s first birthday.

15. With Chas and Debbie still at odds with Charity, Al devises a plan, and thus joins Charity for a drinking session. He soon begins to manipulate her in an effort to get her to admit what Debbie is up to. Full of self loathing, she suggests they go upstairs, and Al ultimately goes along with it.

16. Luke once again pretends to be all loved up with Victoria while in Ethan’s company, but something Ethan says leaves him with food for thought. Therefore, Luke tells Victoria they need to talk, and he ultimately confesses that he’s been with a man.

17. Kim asks where Dawn is, and Gabby wastes little time in dropping her in it, revealing she’s asked to leave early that day. Jamie defends Dawn, revealing she had a meeting with social services. Bear shows up to collect his wallet — which Jamie had found and given to Jai — but it’s gone missing. Jai accuses her of stealing it, and she empties her bag to prove her innocent, but the wallet falls out, and Jai fires her.

18. Kim notices Gabby’s reaction when Dawn is fired, and thus invites the young girl up to Home Farm — telling her that she’s wiped the CCTV, as she knows it was her who set Dawn up. Kim commends her, but tells her she still has a lot to learn.

19. Mackenzie exposes Kim and Will’s relationship, and Dawn is left disgusted, as she realises she’s been lied to. Therefore, she issues her dad with an ultimatum, telling him he has to end his relationship with Kim, or never set foot in her house again.

20. Matty and Amy arrange to go on a date, but Matty’s riddled with guilt over the Kyle secret. Cain reminds him that he needs to keep shtum, but he ultimately decides he cannot, and thus readies himself to reveal all.

21. Charlie makes it quite clear that he wants to plead guilty, but a conversation with Diane results in Nancy realising that the young boy is hiding something. Desperate to find out what, she plans to speak to Ella about what really happened on the night of Jordan’s murder.

22. Nancy knows that Ella is hiding something, but Mandy refuses to let her speak to her daughter. However, she spies an opportunity to do just that. Will she get the answers she’s looking for?

23. Darren begins to worry about Nancy, and Mandy displays some insecurities about such a thing. Courtney brands Nancy a negligent parent, and she starts to blame herself for everything. Darren offers support, and tells her that she’s not to blame. He chooses to protect Nancy over securing his future with Mandy, and later, Nancy’s emotions run away with her when Darren takes her home.

24. Cleo pleads with Celeste to rescue Toby, and after some persuasion, Celeste folds, and heads to fetch her brother from The Loft. However, Dr Ley isn’t pleased to see her, and therefore orders her to leave — claiming that her presence is risking Toby’s recovery. Celeste does as she’s asked, but not before taking some photos of Dr Ley’s notes with her.

25. Sami excitedly tells Misbah that he’s going to be a dad, but matters are somewhat complicated when Misbah later witnesses Verity drinking wine at The Dog!

Gigi Hadid Poses For Her First Magazine Cover Story After Having Her Baby, and Wow!
World News