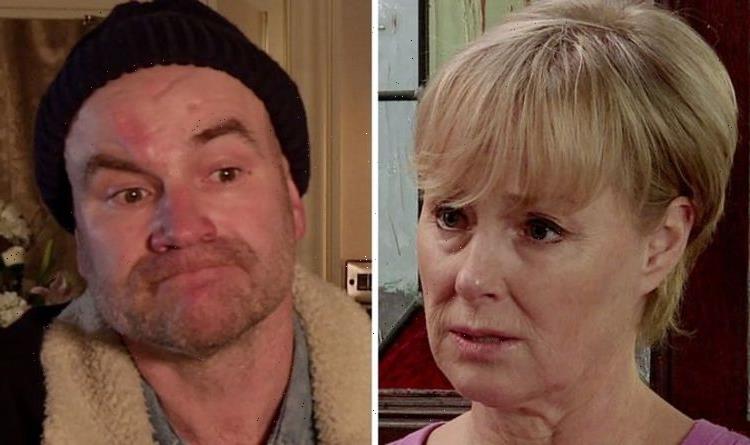 Coronation Street’s Tim Metcalfe (played by Joe Duttine) and wife Sally Metcalfe (Sally Dynevor) started the new year with a new healthy outlook on life. However, Tim has been keeping a secret from his wife that concerns his health which could soon end in heartbreak for Sally. Tim goes under the knife and fears he may die on the operating table, saying a painful goodbye to his wife. However, after the operation, Sally reveals to Tim that she is giving up her dream of politics to help get his health back. Will this pressure put a strain on their relationship?

In upcoming scenes from his hospital bed, Tim begs Kevin Webster (Michael Le Vell) to speak to Sally for him and convey how sorry he is for lying to her and how much he loves her.

Will Sally forgive him for lying to her before he goes under the knife?

As the anaesthetic takes effect, Tim hears a commotion in the hospital corridor as Sally is arrested by a police officer.

Later, Tim wakes from his operation with hazy memories of Sally’s arrest and figures it must have been a dream.

Sally and Faye Windass (Ellie Leech) soon visit Tim, where Sally reveals that the developers refuse to back her campaign because of the article in the Gazette.

Faye wonders if another candidate provided the picture to ruin Sally’s chances at the election.

Sally is fuming and reckons she’s right and confronts Maria Connor (Samia Longchambon) and accuses her of sending in the image.

Sally sends the Gazette a picture of Maria with her 4×4 gas guzzler to try and get her revenge.

When Maria reveals that it was Councillor Len Cameron (Mark Murphy) who provided the Gazette with the compromising picture of her, Sally’s taken aback.

Whilst visiting her husband in the hospital, Sally reveals the events which had happened and promises Tim that she’s going to pack in the politics and focus on him.

Tim becomes sceptical about Sally’s rash decision and is left hurt that she has given up so easily.

Later in the week, Sally blows up balloons, determined they should celebrate Tim’s 50th birthday in the hospital and make him feel better.

However, Tim’s mum, Elaine Jones (Paula Wilcox), is disapproving and adamant he needs to rest, not attend a party.

At the end of the week, Tim is due home, with Elaine offering to move in and help look after him. Tim is delighted, but Sally grimaces.

Sally ensures her husband that she is going to make sure he plays by her rules in order to look after his health.

But will he comply with his other half’s demands or implore her to get back into the political field?

With Elaine moving in, will this put a further strain on their relationship?

Corrie boss Iain Macleod recently told The Sun that there were disagreements on-going over whether to split up the iconic couple.

He said: “I love Tim and Sally as they feel like an iconic Corrie couple, every so often, somebody comes to a story conference and pitches something that splits them up and sends them off with different people.

“It always starts a massive argument, as it did when we talked about doing it with Fiz Stape (Jennie McAlpine) and Tyrone Dobbs (Alan Halsall).

“Tim and Sally feel right together and are peas in a pod, so that’s why this story will matter to our audience, there’ll be a huge level of investment in whether they can get over this hurdle or not.”