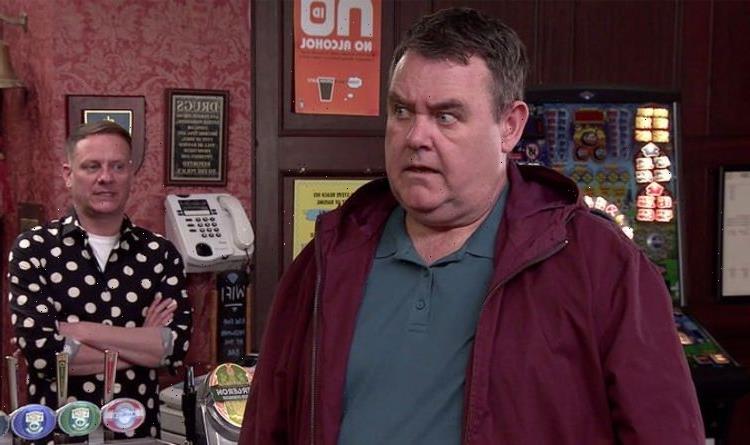 ITV soap fans have been patiently watching an on-off relationship on Coronation Street, as George Shuttleworth (played by Tony Maudsley) has long been trying to convince Eileen Grimshaw (Sue Cleaver) to be more than just friends. On tonight’s episodes of the long-running soap, the pair began to bond once again as Eileen helped George with some errands, however, things soon turned sour and they had a big row. If this is the final straw for George, could he be tempted to start a new relationship with another Coronation Street resident?

In recent scenes on the soap, the couple had a row in the Rovers Return causing George to suffer a nasty injury.

During their argument George stubbled over a barstool and broke his wrist.

On tonight’s double-bill of Coronation Street, Eileen was left feeling guilty about George’s injury and offered to help him with his work.

The pair later stopped off at Eileen’s house for lunch, but as they exited Number 11, they found George’s van had vanished.

He later lays into Eileen when he discovers her son Todd Grimshaw (Bruno Langley) took the vehicle without permission.

“I’ve got nothing to apologise for!” Eileen exclaimed. “You know, you treat your customers with respect but you’ve got no respect for me.”

George hit back: “I’m sorry I ever got mixed up with you in the first place.”

“Involved, embroiled, whatever it is you want to call it,” he clarified.

Eileen fumed: “Well let’s get this straight, we were never involved or embroiled and we never will be.”

“Well that’s one good thing to come out of today,” George remarked.

“I’m sick of being taken for granted,” Eileen said.

George blasted her again: “Do you know, I ran a perfectly sound business before you came along and your son.

“It’s just been one thing after another. To think I asked you out.”

“To think I nearly said yes,” Eileen bellowed. “I’m the one who’s had a narrow escape!”

She quickly stormed off leaving George alone as he let out a frustrated sigh.

Could this argument be the final straw for George? If so he may finally decide to stop trying to win Eileen’s heart.

Earlier in the week, Todd was seen stealing money from George’s funeral business.

If he discovers what Todd has done, it will be another blow for George and he could want to further distance himself from Eileen because of her son’s actions.

With Eileen off his mind, perhaps George will turn his eye to another Coronation Street resident.

Some soap fans seem to think the duo aren’t meant to be, taking to Twitter to comment on their confusing relationship.

One viewer remarked: “Eileen and George wouldn’t be a good couple I don’t think they suit each other #Corrie.”

Meanwhile, a second fan suggested George could do better: “#Corrie … George thinks Eileen is ‘out of his league’ …. Really?”

“Eileen is always horrible George is too nice for her! #Corrie,” another agreed.

Could George really start a new relationship with another Coronation Street resident?

However, it didn’t quite work out for the pair after Bernie discovered Dev had made some unkind remarks behind her back.

Could singleton Bernie be set to spark a romance with George next?

Coronation Street continues on Friday at 7:30pm on ITV.

The Challenge Is Set To Return With Spies, Lies And Allies