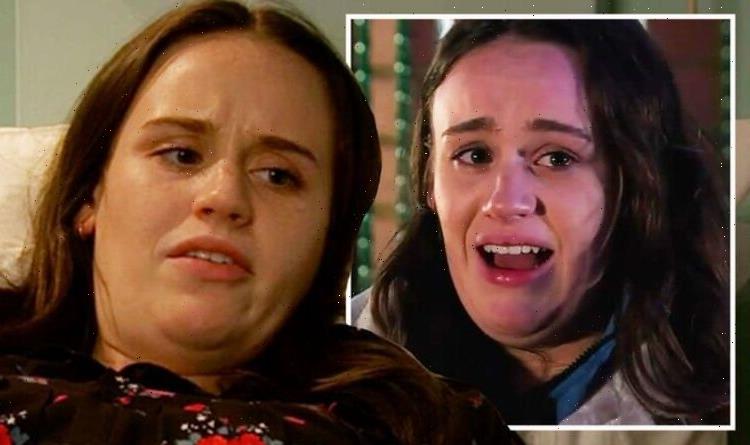 Faye (played by Ellie Leach) was left over the moon last week on Coronation Street when she took a pregnancy test and discovered she was going to have Craig Tinker’s (Colson Smith) baby. However, after realising Emma Brooker (Alexandra Mardell) was dating the grandson of the man who they killed at the beginning of the year on the ITV soap, she has been left in turmoil as to whether she would be giving birth in prison. With so much going on in her head, she took a turn for the worst in the show’s most recent episode but she was not expecting to hear what the medical professionals were telling her.

The young woman began the episode once again worrying about Emma after she told her to break off her romance with Jon Spear (Jordan Ford Silver).

Although Craig told her it was for the best, his other half started to experience pains and she soon believed she was having a miscarriage.

It wasn’t too long before she and her partner were at the hospital waiting to see a sonographer who could tell them what was wrong with their baby.

Having confessed to telling Jon she and Emma killed his grandfather, Craig wasn’t in the best of moods as he thought all their futures could be on the line.

“You’re still angry with me, aren’t you?” Faye asked as she lay on a hospital bed, with her partner replying: “Let’s not do this now.”

“We need to concentrate on you and the baby,” he continued, before immediately ignoring his own advice and asking: “What made you do it?

“Is it down to Emma?” he continued, with Faye telling him: “No, it was me. I had to come clean. Jon was suspicious, he knew something was up.

“I knew what it was doing to Emma. Lying to someone she loves, it was breaking her heart,” she added, with her partner replying: “It’s not the best start for a baby, is it?”

Craig explained the reality of their situation was now going to be they were both going to prison and their baby would have to be brought up by someone else.

Dismayed, Faye said: “I just want to be a good mum. That’s why I told the truth. This baby is so new and innocent.”

Want to be a good mum

“I don’t want to bring it into a life full of lies, it deserves better” she added, with Craig in agreement, no matter how much it hurt him to say it.

The young woman admitted she was scared about what was going to come from the scan and her own future as it looked extremely bleak.

Not too long after, the sonographer entered the room and began the scan on the expectant mother but she was surprised by what she found.

After consulting her colleague, she informed Faye and Craig they were not going to be having a baby and there was no sign the young woman was ever pregnant.

“The modern tests are very reliable but under the right circumstances, they can still show a false positive,” the sonographer explained.

When asked if she could remember the date of her last period, Faye said she had no idea when it could have been as she has had a lot on her plate.

Faye told the sonographer she hadn’t had regular periods for a while and she had just put it down to stress being the cause of it.

The medical professional urged the beloved character to book an appointment with her GP as they would be able to do more tests to discover the issue at hand.

Although the young woman could be fine, the sonographer said there was every chance there could be an underlying matter going on.

With a fair few symptoms raising some red flags, Faye could book to have some tests done and she could be devastated by the diagnosis she is given.

According to Medical News Today, there are five conditions which are associated with someone getting a false positive on a pregnancy test.

These include a disorder affecting the pituitary gland and hormone levels, a phantom pregnancy, ovarian cysts and kidney disease or a urinary tract infection.

There are also several different types of cancer associated with it, including cancer of the ovary, bladder, kidney, liver, lung, colon, breast, and stomach.

Sinead Tinker (Katie McGlynn) passed away after receiving a cervical cancer diagnosis in 2018 but this time, the show could be focussing on ovarian cancer.

It would lead Faye to believe she was pregnant because it would cause her to produce human chorionic gonadotropin, a hormone generated when a woman falls pregnant.

Unfortunately, because it has been going on for several months without treatment, there could be very little the doctors could do.

Having already lost his cousin to cancer, Craig could be about to lose his partner as well, which would leave him heartbroken.

This would ultimately lead to the character’s exit from the programme and a departure for the actress who plays her, Ellie.

However, it was reported at the start of last month the soap star had signed on for another year so the storyline could stretch out over the course of the next 12 months.