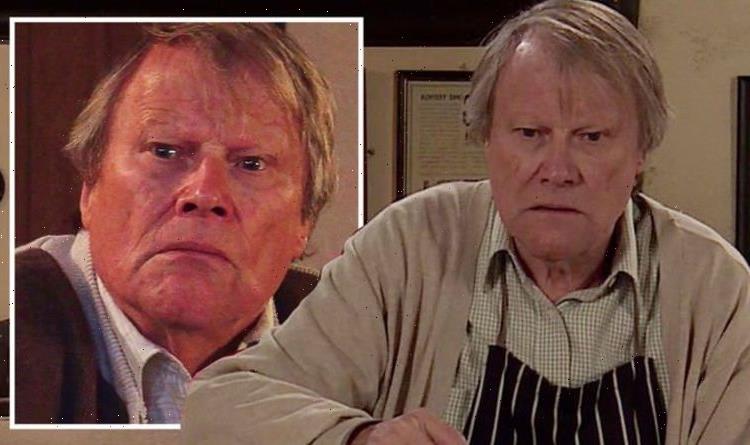 Roy (played by David Neilson) has had a turbulent few months on Coronation Street, what with his niece Nina Lucas (Mollie Gallagher) being central to a harrowing hate crime storyline and the subsequent aftermath which has followed. The beloved ITV soap stalwart has done everything in his power to try and help everyone who was subjected to Corey Brent’s (Maximus Evans) spiteful nature, including Abi Franklin (Sally Carman). However, when he discovers some heartbreaking information about the night Natasha Blakeman (Rachel Leskovac) was killed, he thinks it would be better if he were to leave the cobbles after 26 years.

The drama begins next week when DS Abney (Fiona Skinner) makes a visit to see Abi and tells her the gun used to kill Natasha is linked to her ex, Tez Wyatt (Stephen Lord).

This isn’t new information to Abi as she got the gun from Tez to kill Corey, the boy who murdered her son, Seb Franklin (Harry Visinoni) in the hate crime attack.

It’s not long before the mother of three is getting in contact with her son’s father to urge him to get the police off her back.

Their exchange doesn’t go unnoticed as Roy watches on from a distance and soon after, Nick Tilsley (Ben Price) tells the café owner the police are tracing the gun used to kill Natasha.

Putting the pieces of the puzzle together, the soap stalwart realises the gun Abi was holding on the night of the sinkhole collapse ended up in Harvey Gaskell’s (Will Mellor) hands which led to the heartbreaking death.

Viewers will remember the night of the storm, Roy encouraged Abi to not shoot Corey and urged her to get rid of the gun to avoid getting put behind bars.

Having made the devastating realisation, the soap stalwart informs his niece of the latest developments in the investigation.

He tells the youngster he and Abi must accept the responsibility for playing a part in Natasha’s death and this begins to consume the café owner.

The legendary character is forced to lie to the police again he knew nothing about the gun and this begins a heartbreaking sequence of events.

Calling at the solicitors, Roy tells Imran Habeeb (Charlie De Melo) he wants his home and business to be put into his niece’s name.

The stalwart doesn’t reveal his plan to Nina but he does tell her he no longer wants to burden her with his pain and guilt over Natasha’s death as she continues to grieve for her ex-boyfriend.

This leaves the youngster extremely worried and when he begins to pull away from community events, Nina knows something is very wrong.

Wanting to get rid of everything before he leaves, Roy turns up at the garage and asks Abi to sell his car for him.

Knowing this isn’t usual behaviour for the stalwart, the mechanic tells his niece everything which has been going on and this only enforces the fact her uncle is planning something.

It’s not long before the gothic character discovers from Adam Barlow (Sam Robertson) she is now the owner of Roy’s home and business.

Nina is left reeling and quickly calls on Abi as she fears her uncle is going to take his own life but he is finally forced to confess the truth.

Not able to deal with Natasha’s death, Roy tells his loved one he is going to South America as he has secured a new job as a chef.

After 26 years in Weatherfield, he explains he is leaving the cobbles for good and won’t be coming back to a place that harbours so much devastation for him.

One by one, they sit down with the stalwart and tell him how much he means to them and the impact he has had on their life.

Carla, who has become somewhat of a surrogate daughter to Roy, plays him a voice message left by Nina which explains he has been dragged into something beyond his control.

The Underworld factory owner wants to know what’s going on and when the stalwart refuses to answer, she is left hurt.

Unfortunately, lying to Carla just cements Roy’s decision to leave as he tells his niece he is becoming someone he doesn’t recognise.

Seeing Natasha everywhere he goes, Roy knows he will be unable to have a future on the cobbles as he will be reminded of the ghosts of his past.

However, will Nina be able to stop him from leaving as she plays one more card or is this really the end for Roy after more than a quarter of a century?

Earlier this year, the actor who plays Roy, David, spoke about his future on the show and whether he would be leaving.

The soap star wasn’t explicit about whether he would or would not be sticking around after 26 years on the famous cobbles.

David said: “The time has flown. It’s been extraordinary, and I have worked with some really, really good people.

“I don’t know, I enjoy it. I enjoy grappling with it, people say ‘You’re playing the same thing,’ but it’s not the same thing at all,” he told the press, including Express.co.uk.