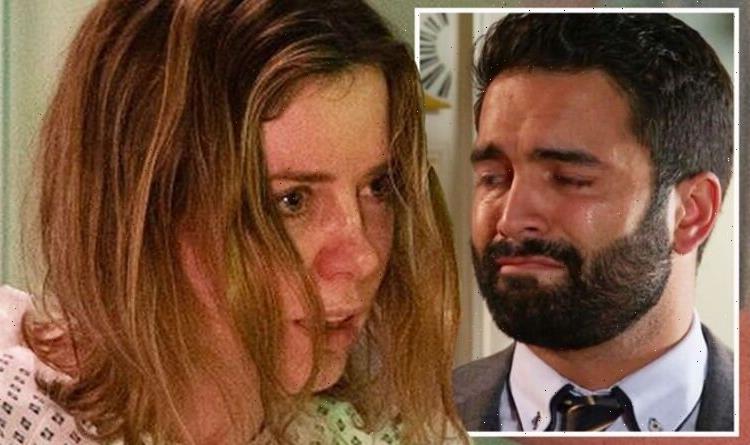 Abi (played by Sally Carman) has been put through the mill this week on Coronation Street, having given birth to a baby she didn’t realise she was having in the midst of a drug relapse. Toyah Battersby (Georgia Taylor) has become a source of support to the mechanic as she now fights to get custody of her son, with social services having to assess whether she is capable of looking after the little one. However, as Imran (Charlie De Melo) spends time with his son and builds a case with Abi to ensure she gets to take their child home, he could come up with a way to ensure they tell their loved ones the truth about the baby as well as leaving the ITV soap for good.

The lawyer will begin to fit the pieces of the jigsaw together by the time next week’s episodes come around as Abi is desperate to keep hold of Alfie.

As well as telling the social worker she has enrolled in rehab, she will have to prove she can provide the baby with a loving home.

Toyah soon learns of the great lengths her friend is having to go through to prove she is a fit mother and she turns to Imran for help.

Currently, Toyah has no idea the pair slept together or her partner is the father of the baby so when she catches them together at the hospital, they have to think on their feet.

It is likely Imran will act as Abi’s solicitor to help her through this process, which means he can spend more time with Alfie.

But as the three spend time bonding and the parents of the child think about what the future looks like for their son, they could begin to thaw towards each other.

Abi could agree she wants Imran to play a part in Alfie’s life, whether it be as his father or a figure such as a god-father.

This is everything Imran has ever wanted, a child of his own and although this may not be how he envisioned it, he could want to give this a go.

Having developed some sort of a relationship with Abi, he could understand her potential as a mother and he could see her in a whole new light.

He would know accepting Alfie as his son would mean his secret is revealed to the cobbles, which is when he could plan his exit.

Imran is willing to make sacrifices

Imran could tell Abi they are going to be public enemies number one and two for having a baby together behind Toyah and Kevin Webster’s (Michael Le Vell) back.

The mechanic could agree they need to make plans to leave so they can be a family of three and start a new chapter away from Weatherfield.

The place they once called home has so many heartbreaking memories for them, including the loss of Abi’s eldest son and Imran’s sister.

It would be the perfect time for them to start afresh, without any judgement or backlash from nosey neighbours voicing their two pennies worth.

According to reports, the actor who plays Imran, Charlie, is going to be leaving the show later this year in a climax to his storyline.

Speaking with Express.co.uk and other media, Charlie hinted at an exit for his character as the weight of his secret is unburdened.

Asked if Imran would jeopardise his happiness with Toyah, the actor said: “I think there is every reason to suspect Abi as being problematic as a parent.

“You don’t need to look too far into the past to see how problematic she is, like when she was introduced as a character onto the street.

“Both Sally Carmen and the writing team have done an incredible job of giving her this arc that’s taken away but is still there.

“I think any person that has suffered from addiction would tell you that you never beat it. It’s a fight every day.”

“She’s had a lot of bad news of late so all it would take is something to make that fight all the harder and as the father in this situation, that would be a huge concern,” he continued.

However, seeing his son could make all the difference as Charlie added: “In those initial few scenes, in the neonatal care units, he sees his son for the first time and he’s so premature and tiny.

“He’s hooked up to wires. He’s got machines that are helping him breathe and feeding him and he sees this little guy that’s so helpless and needs help not just from the medical staff but also his family unit.

“Imran makes a pretty instinctive snap decision that [the hospital] is where he needs to be. He thinks, ‘This is the only thing that matters’.

“The sacrifices he is now willing to make in terms of his set-up at home, his career, the love of his life, the fostering situation, if not to necessarily outright give-up but he’s certainly willing to risk it in order to be present and be there for his son.”

“By some extension, this means Abi in order to make sure that her previous misdemeanours and mistakes aren’t used as a way to keep her away from him as well,” Charlie continued.

With Imran actually starting to feel feelings for Abi, it isn’t completely out of the question they could be part of a double exit.

The heartache they would leave behind would be immeasurable, with many residents impacted by the consequences of their actions.

As the door could be left open for them to return in the future, would they ever be able to go back knowing what they’ve done?