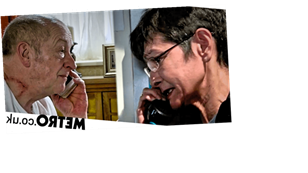 Yasmeen is currently behind bars after she stabbed her husband Geoff in the neck following more than a year of abuse.

The abuser revealed that he’d be willing to forgive her and drop all charges if she agreed to be his wife again.

Begging Yasmeen to take him back and to ‘let him love her’, Yasmeen hit back: ‘I know what your love looks like’.

She then urged Geoff to leave her alone and ended the phone call.

Before the end of the episode, Geoff took a gamble and therefore headed to the police station, where he told DS Abney that he wanted the charges against his wife dropped.

The detective informed him that it simply wasn’t that simple, and the CPS gets to make the final call on this case.

Yasmeen was shocked when she learned what Geoff had done, and her interest was piqued all the more when she discovered that — if the CPS agree to drop the charges — the trial may not go ahead.

Panicked audiences rushed to Twitter to comment on the episodes, with many fearing that Yasmeen will go back to Geoff’s evil clutches.

‘Yasmeen is going back to Geoff isn’t she?? If she does, god only knows what’s going to happen after that??’ wrote one.

Echoing a similar sentiment, another added: ‘I REALLY hope that Yasmeen doesn’t get back with Geoff. That would be awful.’

Will she go back to Geoff after all?