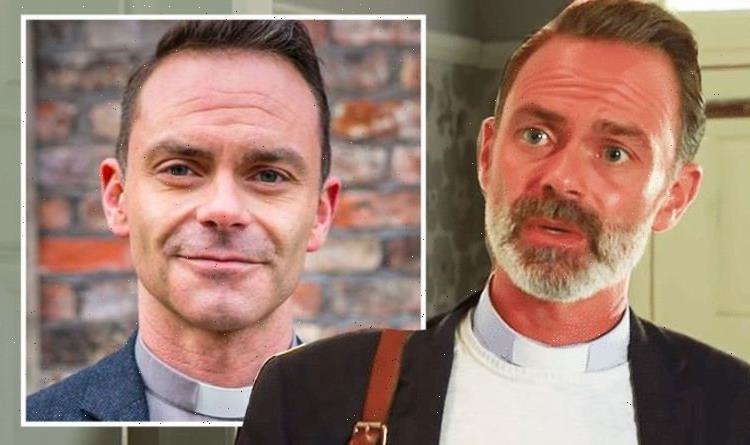 Coronation Street exit for Billy Mayhew as he pursues new career away from Weatherfield?

Billy (played by Daniel Brocklebank) has been a pinnacle of the Coronation Street community since he first arrived on the scene in 2014. Ever since, viewers of the ITV soap have learnt about his dark past, his heartbreaking connection to the Barlow family, his many failed relationships and becoming a father to Summer Spellman (Harriet Bibby). However, it seems other than preaching the verses of the bible, he has some other hidden talents which will take centre stage in the Christmas episodes but will he decide to leave the cobbles as he realises he could make a career out of it?

Although he has been a supporting character in Summer’s diabetes storyline and her plot involving Daniel Osbourne (Rob Mallard), Billy hasn’t taken centre stage in any of the drama for a while.

On Christmas Day, he decides to lift everyone’s spirits as the residents of the cobbles come together for a sing-along.

The likes of Nick Tilsley (Ben Price), Leanne Battersby (Jane Danson) and Sam Blakeman (Jude Riordan) join Daisy Midgeley (Charlotte Jordan) at the pop-up bar where she has managed to transport the piano from the Rovers Return.

As they gather around, Billy begins singing and playing the piano, much to the amazement of his friends and neighbours.

If someone records his performance and puts it on social media, it wouldn’t take long for the vicar to become a viral sensation.

Billy might not think much else of it but this could be the beginning of a new chapter for him as his life beyond the church becomes broader.

A talent scout could see the post online and get in touch with the vicar to see if he wants to audition for a new show on the West End.

At first, he could decide to reject the offer as he’s worried about leaving Summer whilst she’s in the midst of so much stress.

However, his former lovers Todd and Paul Foreman (Peter Ash) could agree to care for the youngster for the foreseeable.

Todd and Paul have never seen eye to eye, especially as the former meddled in Billy’s relationship with the builder, causing them to split.

Both caring for the vicar deeply, however, they could agree to put their grievances aside for the sake of Summer and co-parent like the adults they are.

With assurances the teenager will be well looked after, Billy could agree to go to the audition and land the role on the stage.

As a new career opens up for him, the vicar could say a fond farewell to his loved ones and neighbours on the cobbles.

Getting into the back of a taxi, he could shed tears as he leaves the community he has become so integral to over the past seven years.

Back in 2019 and with the emergence of a new executive producer on the show, the actor who plays Billy, Daniel, addressed his future on the programme.

The soap star said at the time: “It’s good, I genuinely love it there. I’m in my sixth year and I’ve got some wonderful friends.

“Whenever there’s a new producer that comes in, there’s always going to be a change. I’m sticking around. I’ve just signed up for another year,” he told The Sun.

Still in the midst of the coronavirus pandemic, the Christmas episodes have still been adhering to social distancing guidelines but with the rules relaxed a couple of months ago, not all the actors will be standing two metres apart.

Daniel has spoken out about what it was like to return to filming last year following the nationwide lockdown.

The soap star said: “It’s just so good to be back. Corrie is such a brilliant place to work, we all get on so well.

And we’d missed each other so much. Being able to be together face-to-face was fantastic, even though we are still at a distance.

“To be working as well has been a thrill. To come back from that and to be back to such an exciting storyline,” he continued.

“I’ve spent the entire of lockdown alone and going out of my mind, so it was a joy to be back,” the actor shared.

Taking to Twitter, viewers have been calling for Billy to be involved in more storylines since he has only been a supporting character for the past few weeks.

Dan wrote on the social media platform: “Hope Billy and Paul get back together but at the moment all they seem to do is argue #corrie.”

Den posted: “Look at him. This is why Billy is Billy. Why there’s so much character and expression to him. Amazing.”

Craig commented: “Billy always hanging about somewhere, does he ever do any vicaring? #Corrie,” followed by a laughing face emoji.

“Wonderful scene between Billy and Yasmeen [Nazir] tonight,” Sophie shared, following the episodes where they were both working at the soup kitchen.

Will they be sad to see Billy go if he does decide to leave for pastures new?

Coronation Street airs Mondays, Wednesdays and Fridays at 7:30pm and 8:30pm on ITV.