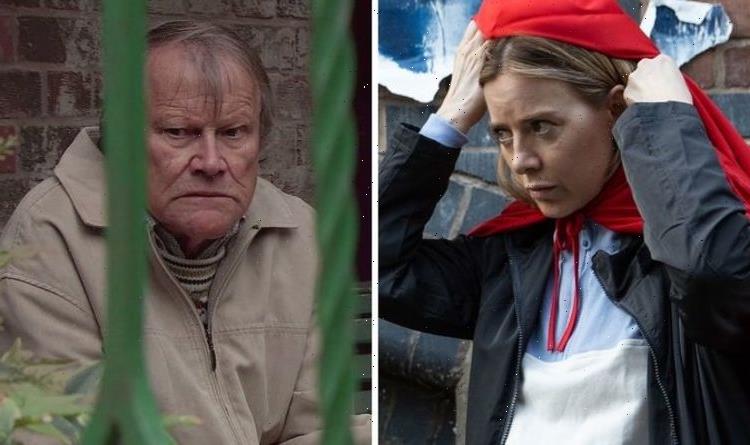 Nina Lucas (played by Mollie Gallagher) was mortified to discover that Abi Franklin (Sally Carman) has been intent on killing Corey Brent (Maximus Evans) in Coronation Street. On Monday night’s double-bill of the soap, Nina and Roy Cropper (David Neilson) go on the hunt for Corey before Abi finds him first. Could Abi end up being arrested after Roy reports her to the police in order to save Corey?

ITV viewers recently saw Abi purchase a gun as she’d been intending to use the firearm to shoot Corey dead over the murder of her son Seb Franklin (Harry Visinoni).

She’s even been tracking Corey’s movements in a little red book that Roy found on the floor of the cafe on Friday.

A suspicious Nina demanded Abi come clean about what she had planned after locating her.

She was stunned to discover Abi was planning on killing Corey with a £2,000 gun and pleaded with her to reconsider.

In Monday’s instalment of the soap, Abi was seen watching an Instagram video of Corey packing for Germany and she slides a gun into her bag.

A concerned Nina went on a frantic search around the cobbles hoping to find Corey.

While she was on the hunt for Corey, Roy begged her to stop and take a breath.

Roy said: “Nina, can you please tell me what’s going on?”

A stressed Nina told Roy she didn’t have time to talk about it, but he insisted she told him what the problem was.

Nina told him: “Look, Corey’s in danger. If you want to help then maybe if we can split up maybe we can find him.”

Nina explained: “I am sure you’ll think of something, just take care yeah?”

Later on in the episode, the pair met at a Halloween party where Roy admitted to Nina he thought he heard a gunshot.

“I am no expert in such matters but a short while ago, I heard, what I took to be a gunshot,” he explained.

“Abi is planning something reckless?”

An alarmed Nina replied: “She has a gun – I called her out on it and she handed it over to me, except when I unwrapped it, it turned out to be a stupid glue gun. How could I be so stupid?”

Roy could not believe Nina was aware that Abi was in possession of such a dangerous weapon and begged her to call the police immediately.

Gonzaga is No. 1 in preseason AP Top 25; UCLA, Kansas next