Home » TV & Movies » Cool Stuff: You Can Never Have Too Much King Shark, as This Fancy Sideshow Figure Proves 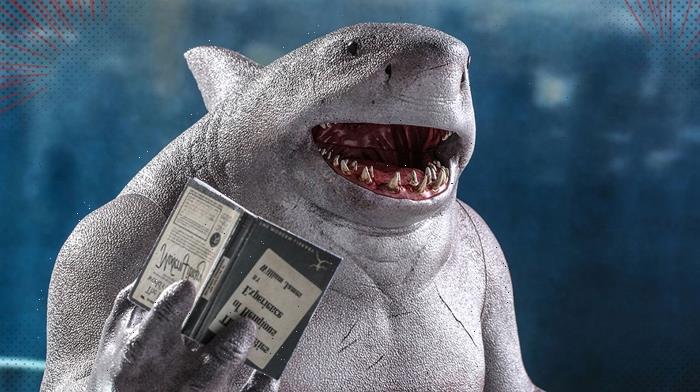 Cool Stuff: You Can Never Have Too Much King Shark, as This Fancy Sideshow Figure Proves

We can’t help it, we love King Shark. The most huggable member of The Suicide Squad is now available as a sixth scale collectible figure from Sideshow and Hot Toys. So whether you want to hug him or you just think he’s hot, there’s a King Shark figure coming to shark up your shelves.

It’s impossible not to love King Shark. The big, dumb, funny fish is one of the highlights of The Suicide Squad‘s eclectic cast of characters. Whether he’s enjoying some nom-noms or trying to disguise himself with a finger-moustache, he’s a strange kind of adorable.

Unsurprisingly, there’s quite a bit of King Shark merchandise out there, for every fan of this fabulous finned force of nature. While McFarlane Toys has a King Shark figure you can build by collecting the rest of the Suicide Squad, this figure is a standalone version of our favorite big boy. It also features seven points of articulation, putting it just a step above the (admittedly cool) Iron Studios statue. This is a King Shark that you can manipulate into all kinds of fun action poses, and he even has rough-textured shark-like skin.

The figure stands approximately 35.5 cm tall, just a bit taller than your average Barbie or G.I. Joe doll. There are lots of little details to make the figure as screen-accurate as possible, including sculpted rows of sharp teeth, powerful jaws, and a textured paint job. The body is articulated at the arms, wrists, and waist, though it’s a shame they didn’t make that mouth openable for extra nom-noms. The figure comes with two sets of interchangable hands, including relaxed hands and gesture hands. The figure itself is crafted from vinyl, but he comes equipped with a pair of cloth pants that match his onscreen costume. He also comes with a book, though whether or not he knows how to read it will be up to you!

This hefty-looking figure is going to rock any shelf it sits on, but it’s also going to put a hurting on your wallet. The figure is available for pre-order from Sideshow, retailing at $220. That’s quite a bit of dough to shell out for this shark, but he is pretty lovable. I almost want one just so I can make sure he’s never lonely; unlike the Squad, I would never make him sit in a car by himself.

If you’ve got the money to throw at this mini-maritime monster, then head over to Sideshow and order one today. Just don’t blame me if he eats your other action figures.

Before You Break Out The Gloves, This TikToker Warns About A Dangerous Hair Dye Allergy