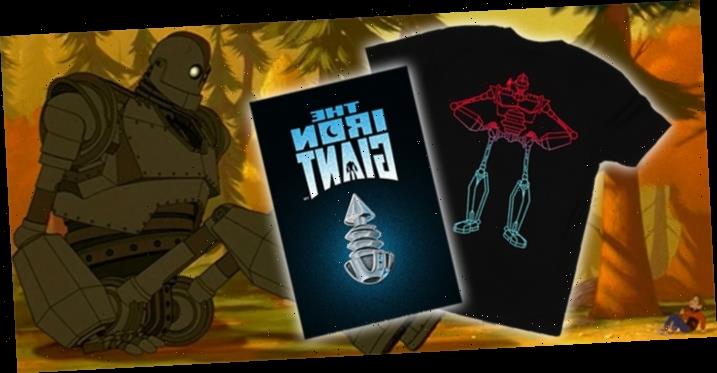 The Iron Giant isn’t celebrating a special anniversary or anything like that this year. But Mondo never gets tired of paying tribute to one of the last truly great 2D animated movies of the 20th century. This time, in honor of the movie about a robot who chooses to be much more than a weapon, we have a new t-shirt by artist Maggie Chiang, as well as four new enamel pins by artists Scott C., Tom Whalen, and DKNG. Check them all out below.

Rather than using the traditional image of The Iron Giant in his sleek metal glory, Maggie Chiang has used a simple illustration of the titular character and brought him to life with striking reds and blues that call back to the interstellar clouds he traveled through to reach Rockwell, Maine. Chiang said:

“The Iron Giant is such a throwback movie to my childhood, I just had to take the opportunity to create a shirt around the iconic robot! I wanted to recreate the Iron Giant with a fresh new look using some fun modern colors.”

The Iron Giant shirt costs $25 at Mondo and is expected to ship sometime this month.

Finally, here’s four new enamel pins from artists Tom Whalen (left), DKNG (second from left), and Scott C. (two on the right). Whalen did a simple in of The Iron Giant’s head, and he gave it glow in the dark eyes. He said:

“The Iron Giant is a near-perfect animated stew; a thoughtfully-written central cast with genuine motivations, a beautifully-designed alien, and heart-pounding action all set against the backdrop of 1950’s cold war America and executed with lush cel animation. Twenty-one years after its initial release, it remains on my Mount Rushmore of animated films.”

Meanwhile, DKNG decided to turn one of the signature pieces of The Iron Giant into a pin. The big screw is the only piece that Hogarth has to remember the robot by after he sacrifices himself to save people from a nuclear bomb. But suddenly it comes to life and rolls away to connect with the beacon calling all of his parts to bring him back to life.

And finally, Scott C. delivered two pins in his signature scribble style. One has Hogarth sitting in The Iron Giant’s hand while the other is the robot sitting innocently in the forest, mimicking Hogarth sitting across from him. Scott C. said:

“There was a time when all of my color palettes were inspired by the Iron Giant. I love those fall colors so much! And those pea soup skies.”

All of these pins cost $10 each at Mondo and will be shipping as soon as possible.

'We're just going to walk away from this?' How Minneapolis left a police station to rioters