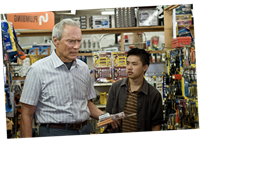 Over 13 years after Clint Eastwood’s “Gran Torino” opened in theaters and became a box office sensation ($148 million in the U.S. and $269 million worldwide), cast member Bee Vang has come forward to criticize the film for mainstreaming anti-Asian racism in America. Vang starred in the film as Thao Vang Lor, a young Hmong teenager who befriends his elderly racist neighbor (portrayed by Eastwood). While Vang credits “Gran Torino” for heightening Asian representation on screen, he writes it came at the expense of also heightening anti-Asia racism.

“Back in 2008 I starred opposite Clint Eastwood in ‘Gran Torino’ playing the lead Hmong role in a tale of two people transcending their differences to form an unlikely human bond,” Vang writes in an essay published by NBC News. “It was a historic cinematic moment for Hmong people around the world, despite its copious anti-Asian slurs.”

Vang continues, “At the time, there was a lot of discussion about whether the movie’s slurs were insensitive and gratuitous or simply ‘harmless jokes.’ I found it unnerving, the laughter that the slurs elicited in theaters with predominantly white audiences. And it was always white people who would say, ‘Can’t you take a joke?’ Today, I shudder at the thought of what that meant. More than a decade later, the anti-Asian racism that was once disguised as good-natured humor has been revealed for what it is, thanks to Covid-19.”

The bulk of Vang’s essay touches upon recent examples of anti-Asian racism, from last year’s stabbing of an Asian American family in Midland, Texas, to the recent murder of Vicha Ratanapakdee, an 84-year-old Thai American.

When Vang circles back to “Gran Torino,” he writes, “[The film] may have elided the crisis in Asia that birthed our diaspora and many others across the Pacific. But more concerning was the way the film mainstreamed anti-Asian racism, even as it increased Asian American representation. The laughter weaponized against us has beaten us into silent submission.”

“To this day, I am still haunted by the mirth of white audiences, the uproarious laughter when Eastwood’s curmudgeonly racist character, Walt Kowalski, growled a slur. ‘Gook.’ ‘Slope head.’ ‘Eggroll.’ It’s a ‘harmless joke,’ right? Until it’s not just a joke, but rather one more excuse for ignoring white supremacy and racism,” the essay reads. “For Asian Americans, this is the time to demand recognition, not to recoil into a cocoon of model-minority pusillanimity. Showing ‘our American-ness’ was never enough. This is a deceit of multiculturalism.”

Head over to NBC News’ website to read Vang’s essay in its entirety.