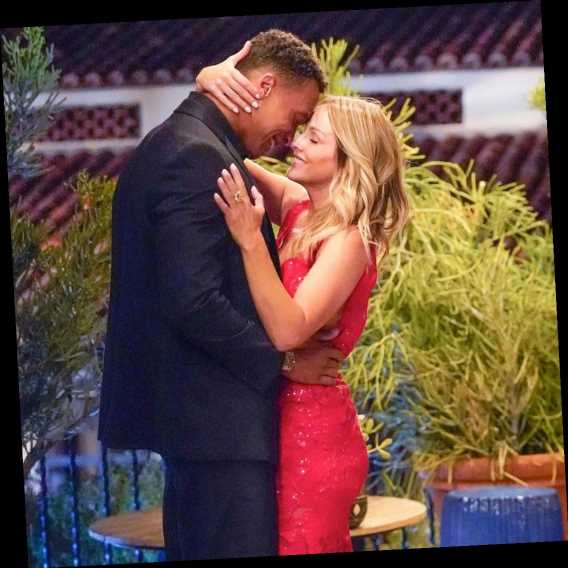 Clare Crawley and Dale Moss Are Engaged! Here's How The Bachelorette Proposal Went Down

After months of anticipation, Clare Crawley said goodbye to The Bachelorette and hello to her new fiancé, Dale Moss. Now, it’s Tayshia Adams’ turn to find love. Relive how it all went down.

It's a happy ending that arrived early: Clare Crawley and Dale Moss are engaged!

Just four (!) episodes into season 16 of The Bachelorette, the lead of ABC's hit romantic franchise found the one in a way that's completely unprecedented. Just as Chris Harrison teased time and time again, the Thursday, Nov. 5 episode proved that Clare not only delivered an "explosive" plot twist, but that she absolutely "blew up" The Bachelorette.

Yes, this means that the lineup of men competing for Clare's heart were totally devastated and pissed after the rose ceremony and cocktail party were canceled. And yes, this means that Bachelor in Paradise alum Tayshia Adams is now the new Bachelorette. But before we begin fantasizing about what's next (Will the men get out of the limo for Tayshia again? Does she get an entirely new batch of guys?), let's focus on the magical proposal itself.

Clare made it clear the only man who she'd walk down the aisle for is Dale, telling producers, "I am so far in love with Dale. We have this connection where it feels like I've known him forever. It's that intangible chemistry that you just can't make up and you can't replace. It's something that is so rare to feel so connected to someone when you've only known them for such a short period of time."

After a conversation with Chris, during which she swore on her "dad's grave" that the two did not correspond prior to filming, the pair decided that Clare would cancel the night's cocktail party and rose ceremony to focus on Dale.

Over an intimate dinner, Clare professed her love as the pair bonded over their shared experience of losing a parent. When it was Dale's turn to reciprocate his feelings, he did not hold back.

"When we met I felt love and, like, that's what I came here for," Dale shared. "I'm falling in love with you through this process. I'm not afraid to say that at all. My heart is open and I'm not gonna fight that. I've been dying to share this with you. It's right here, right in front of our face. It is what it is."

To celebrate, The Bachelor Presents: Listen to Your Heart winners Bri Stauss and and Chris Watson serenaded the happy couple.

Cut to the next morning and the couple was shown cuddling in bed as they discussed their next steps. Chris then informed Clare that Dale was prepared to propose that night, but she would first have to break the news to the other guys.

Clare Crawley & Dale Moss Are Engaged! Inside the Proposal

Rapper and Influencer Brax Dead at 21

How Mom Wrote Off Anna Faris

"I just have so much respect for you guys that I would never want to lead any of you on," she told them. Reactions were mixed at best, with Kenny the boy band manager demanding an apology from Clare for "faking it."

Most, however, bid Clare a fond farewell, and she was off to start the rest of her life with Dale.

Come proposal time, Dale spelled out exactly how he feels about his future wife.

"From the moment I stepped out of the limo, this was special," he told Clare. "I know you and I, we both felt it immediately. There was absolutely no denying it. You made it so clear and apparent at every phase of this that you believe in us, you believe in you and I. I know without a shadow of a doubt that you would go to the end of the earth for me and I'm so grateful for that."

"I want to make you happy each and every day so with that being said, Clare, will you marry me?" he asked, before she responded with a resounding, "Yes!"

Before they could properly toast to their engagement, Clare presented Dale with her final rose.

"It's wild, right, that we're here right now, but when you know you know," Dale told cameras. "This is how it was supposed to happen at the beginning. We saw this coming a long time ago."

"We so saw this coming. I felt it," Clare said, to which Dale responded, "I accepted it."

Ahead of season 16's premiere, multiple sources confirmed to E! News that Tayshia would indeed swoop in and replace Clare as Bachelorette. But we weren't sure what the circumstances surrounding her exit would be, and whether she'd end up with a man in the first place.

As any Bachelor Nation fan remembers, Clare went googly-eyed over Dale the second he stepped out of the limo during the premiere. His first few words for her? He said, "Clare, my name is Dale. While it's been a long time coming, I couldn't be more excited to take this journey with you. I really do feel it's going to be special."

He hugged and picked her up during their meet-cute, and after he walked away, Clare sighed in excitement and said to herself, "I definitely feel like I just met my husband. Did she, or didn't she communicate with him before filming? That's irrelevant at this point.

She doubled down on her enthusiasm for Dale during various interviews in October. "Obviously the chemistry and the connection was very apparent that it was there," she said on E!'s Daily Pop. "But there's also, I mean, I've been around enough to know that there is lust and there's that kind of initial spark, but when the real test is, I think, when you go through things, and you start having those deep conversations, those hard conversations and actually connecting."

That same month, Clare took to social media to clear the air about a ring she was spotted rocking on that finger. "People have noticed I wear this ring on my wedding fingers, and have asked why," she wrote on Instagram. "The truth is because it is a commitment to myself first and foremost, to embody self-love." Sure, that may have been true. But just hours before the Nov. 5 episode, newly-published photos found Clare wearing a different massive ring that gave away the episode's big spoiler.

Either way, Clare repeatedly shared just how happy she was in her current life in the weeks leading up to her exit. "I am in love with life right now," she told Good Morning America in October. "Things are really good. It's good not being in quarantine. I'll tell you that." She continued, "Everybody keeps asking me, ‘Are you happy? Are you happy?' And I keep telling everybody, like, I was happy going into this. So, whatever came about it, I'm happy now. Things are well on my end."

With Dale by her side, things are indeed very well. Congratulations to the couple!