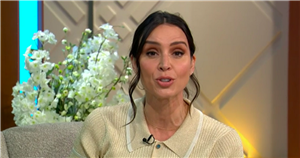 Lorraine fans were divided as an interview with comedian Simon Amstell made toes curl.

The funnyman challenged stand-in host Christine Lampard on her ambitions of taking over from Lorraine Kelly on a permanent basis.

He asked: "So what's the deal are you planning on taking over from Lorraine then?"

Christine hit back: "I'm the one asking the questions."

Things turned awkward when Simon again asked further questions, even though he'd been warned once.

"Simon, you have to stop asking the questions – you are the star," fumed TV star Christine. The awkward interview certainly caught the attention from many Twitter fans. Other's however, hailed Christine for her professionalism as she took back control in a stern but polite manner.

"So funny!! Christine has held it together well though #Lorraine," chimed one.

"This is brilliant. @clbleakley is handling Simon so well. So so funny. @lorraine #lorraine," explained another. Christine has stepped in to cover for Lorraine who is currently on a summer break.

During her time in the interview chair, Frank Lampard's wife has certainly tackled an array of challenging topics.

Earlier in the week, the TV presenter interviewed Sarah Ferguson (Fergie) – who was previously married to The Queen's son Prince Andrew.

Prince Harry and Meghan, who officially left the Royal Family on March 31 last year, naturally came up in the context of discussion and host Christine was keen to capture Fergie's views on the situation.

The Duchess of York said: "Well I think Diana and I went through enormous things without social media in the 80s, and we really went through a lot Christine.

"It was really very very tough."

She went on: "And if she was here today, I know that she would just be completely like an eagle.

"She would fly high and be so proud of her two sons and their wonderful wives who have delivered amazing children.

"I mean it really is a total blessing."