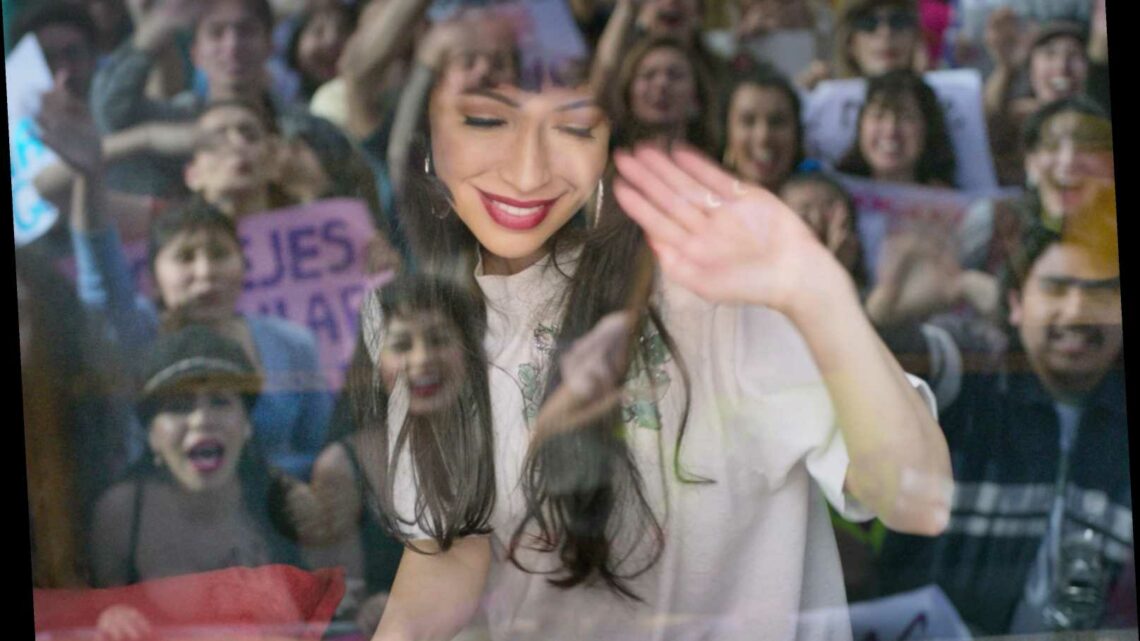 Christian Serratos Portraying Selena Is 'A Way To Thank Her'

For actress Christian Serratos, playing the titular role in Netflix’s Selena: The Series isn’t just another milestone in her already impressive career. After holding down three seasons as the popular girl Suzie Crabgrass in the Nickelodeon sitcom Ned’s Declassified School Survival Guide, she played the hot-headed survivalist Rosita Espinosa in AMC’s The Walking Dead, as well as the shy, kind-hearted Angela Weber throughout the Twilight films; but her latest part is her most personal yet. In her eyes, it’s an opportunity to pay tribute to the late Mexican-American Tejano pop icon Selena Quintanilla, in the only way she knows how: by channeling the skills she’s honed into a deeply layered and intimate look at a singer whose musical breakthroughs and untimely death immortalized her in music culture forever.

“This is a way for me to thank her for everything she’s done,” Serratos tells MTV News. “But I also just want people to enjoy seeing this woman who we love so much. I want them to enjoy seeing any bit of her story again.”

Serratos started her career as a three-year-old competitive skating prodigy and signed to Ford Modeling Agency just four years later. Growing up in the spotlight through modeling and acting roles, Serratos greatly looked up to Quintanilla, especially as she didn’t find many Latinx role models in pop culture. “She accomplished so much at such a young age and was able to do it with such grace, such joy, and such passion. And those were great qualities for anybody to look up to, but it really helped me as a young girl navigating what I wanted to be,” she says.

This isn’t the first time that fans will have seen Quintanilla’s legacy on screen — the 1997 biopic Selena, starring Jennifer Lopez in her first leading role, was a critical and commercial success when it was released two years after Selena’s tragic death. While the film focused on the icon’s influence in her later years, Netflix’s take scours the roots of her stardom from the formation of her family band, Selena y Los Dinos, to their early days of touring. What’s made apparent is that Quintanilla’s life wasn’t an overnight rise to stardom but, rather, a story familiar to many Latinx families in the United States: years of hard work in the pursuit of a dream.

To play the role of Selena Quintanilla is to celebrate a young woman who was both a powerhouse artist and also just a regular Mexican-American girl trying to find herself. With Serratos taking the reins of the next iteration of Quintanilla’s legacy, the first season of the nine-episode series feels more like a coming-of-age story than a standard biopic, expanding the lens of Quintanilla’s life. Though the focus is undoubtedly on Selena, similar to the standard biopic. “I’m so excited that we’re going to see a longer telling of her story because we’re a television show and we’re going to have so many more hours with her and her family,” Serratos says. “And I think it’s going to be really interesting for die-hard fans to see the lead-up to the icon.”

The series, which hits Netflix today, is poised to introduce a new generation of fans to Selena’s life and music. The singer was just 23 years old when she was murdered by the president of her fan club, but she had already accomplished more than most can achieve in a lifetime. She won the 1994 Grammy for Best Mexican-American Album as well as various accolades from the Tejano Music Awards, including Best Female Vocalist of the Year and Performer of the Year, and was on the brink of major mainstream success. Her 1995 posthumous collection, Dreaming of You, the crossover album she so badly wanted to make, was the fastest-selling LP of that year and, for a female artist at the time, in pop history. She was inducted into the Billboard Latin Music Hall of Fame after her death and received her Hollywood Walk of Fame star in 2017.

What makes Selena so iconic is the fact that her musical career, though forever left incomplete, marked a monumental shift of Latinx culture in the U.S. It’s evidenced by both the reaction of mainstream media at the time, which scrambled to understand Quintanilla’s impact, and also the fact that contemporary artists cite her as an inspiration in their careers. From Beyoncé and Solange to Demi Lovato and Selena Gomez — who was named after Quintanilla — Quintanilla’s impact has resonated far beyond the reach she probably ever imagined. After her passing, People magazine produced a special tribute edition to the singer, its third-ever (after Audrey Hepburn and Jackie Kennedy Onassis); its popularity helped launch an entirely new magazine, People en Español.

Serratos knew the legacy. But taking on a role with a rabid fan base was nothing new for her. After joining The Walking Dead as a recurring character in 2014, she became part of the main cast in 2015, and she’s since become the longest-lasting Latina actress in the series. She’s even outlived the comic-book version of her character, a survivor bolstered by both physical and mental strength. But the new Netflix show finds fans in Selena’s family themselves, who were fully behind the project and helped Serratos bring an authentic view of the singer behind the scenes.

“We all feel this connection to her, but she was theirs,” Serratos says. “She was their family and their loved one. So to have them on board is so special and also gives the other people who love her such a great insight on her.”  This also marks Serratos’s first role portraying a real person, not just a character, so her process to prepare was strenuous — dialect coaching, dance and singing prep, and hours studying the singer’s mannerisms and signature performances that captivated crowds. “I put so much more into it, everything I could do, and really considered if I was willing to dedicate as much as I needed to dedicate to play this role sufficiently for everybody,” she says. “She means so much to me, but I know what she means to so many people and so many women and people in my community.”

That training lends nuance to Serratos’s portrayal of Quintanilla, made all the more special in the moments she pulls from her own experiences and completely immerses herself in the role. She shot scenes in Mexico, which brought back memories of her grandparents, and worked with a full Latinx cast to bring this production to life. In every department from sound and wardrobe to camera and special effects, Latinx crew members are the majority driving force behind this series. At a time when the demographic is still underrepresented in writers’ rooms or director’s chairs and cast in stereotypical roles, Selena: The Series is pushing against the barriers that Selena Quintanilla fought with her stardom.

In addition to her music, Quintanilla experimented heavily with her stage presence and look, even making her own clothing and going on to establish Selena Etc., a series of boutiques where she sold her designs. She was an entrepreneur beyond her years, setting the blueprint of celebrity-driven brands and endeavors that defines modern fame. This is the weight of Selena’s legacy: She was a trailblazer both in her life and beyond, inspiring the Latinx community and many artists who followed. Selena was just like a lot of her fans, navigating her dual identities as American and Latina and often being pushed to choose a side. And sadly, that duality is still misunderstood by many Anglo Americans who may not understand her influence or who she was.

“I want people to see what a smart and passionate young woman she was,” Serratos says. “And I also want them to see this hardworking American family, who’s just trying to live the American dream and who were forced to break down barriers and create a new path for themselves where there wasn’t often one for people of color.”

Football tips – Chelsea vs Leeds: Get Blues at 7/1 or Whites at 40/1 to win on Saturday evening
World News