Home » TV & Movies » Chilling Adventures of Sabrina: Every Riverdale Reference in Part 4, Plus the Insane Crossover That's Still to Come 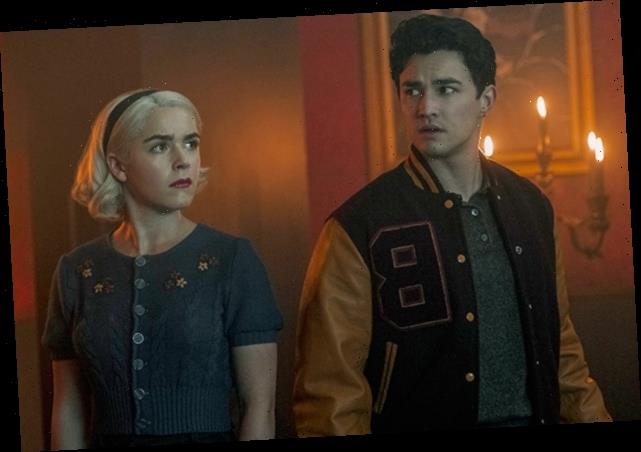 Chilling Adventures of Sabrina: Every Riverdale Reference in Part 4, Plus the Insane Crossover That's Still to Come

Chilling Adventures of Sabrina‘s final eight episodes send the show’s titular teen witch to every conceivable corner of the cosmos. Alternate realities, actual hell, you name it. So why doesn’t Sabrina’s journey through the multiverse include a pit stop in Greendale’s neighboring town of Riverdale?

Well, a major crossover between Sabrina and Riverdale was in the cards… but only if Netflix ordered the show beyond Part 4. As explained by showrunner Roberto Aguirre-Sacasa, Part 5 of Sabrina would have set the stage for a “witch war,” one that would apparently pit the Fright Club against the “witches of Riverdale.” Even crazier, those “witches” look suspiciously like Betty, Jughead, Archie, Veronica and Cheryl.

The silver lining here is that Aguirre-Sacasa still plans on telling this bonkers story, albeit through the magic of comic books. Check out the intriguing art below:

That said, Part 4 isn’t without its share of Riverdale shout-outs. The first reference comes in Episode 1 (“Chapter Twenty-Nine: The Eldritch Dark”), when Roz tells her fellow WICCA members, “At Riverdale, they have condoms in the bathroom.”

Riverdale‘s second mention comes during Episode 3 (“Chapter Thirty-One: The Weird One”). A character named Lucas briefly attends Baxter High, and when Sabrina inquires about his whereabouts later in the hour, she’s told, “It is my understanding that he has transferred to Riverdale High.”

And while this isn’t a direct Riverdale connection, Episode 6 (“Chapter Thirty-Four: The Returned”) features a familiar trio of guest stars. Sean Depner, Sarah Desjardins and Doralynn Mui — all of whom played students at Stonewall Prep on Riverdale — appear as members of an ill-fated rock band.

Did you catch of all of these references in Part 4? Did we miss any? And what do you think of the witchy crossover still to come? Drop all of your thoughts in a comment below.