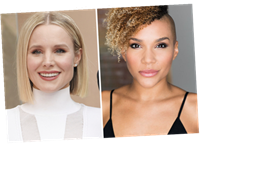 “After an extensive casting process that brought a number of incredible contenders to the forefront of our Molly search, we could not be more thrilled, honored, and certain that we have found the perfect marriage of character to voice in the amazing Emmy Raver-Lampman,” the Central Park creative team of Loren Bouchard, Josh Gad, Nora Smith, Halstead Sullivan and Sanjay Shah said in a statement. “From the moment we heard her Molly, we knew she was the right choice.”

Bell voiced the character of Molly — the mixed-race daughter of Leslie Odom Jr.’s Owen and Kathryn Hahn’s Paige — in Central Park‘s freshman season, which debuted on Apple’s streaming service in May. But Bell stepped away from the role last month, stating that “playing the character of Molly on Central Park shows a lack of awareness of my pervasive privilege.” The animated series received a two-season series order from Apple in March 2018.

A Broadway veteran of Hamilton and Hair, Raver-Lampman is best known to TV fans as mind-controlling superhero Allison Hargreeves on the Netflix comic book series The Umbrella Academy, which returns for Season 2 next Friday. Her other TV credits include Jane the Virgin and A Million Little Things.