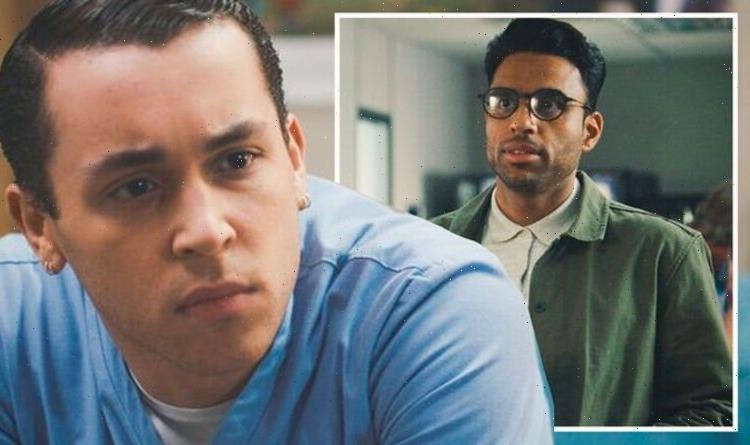 Marty (played by Shaheen Jafargholi) has been enjoying a romance with Adi (Raj Bajaj) for a fair few months now and although the nurse isn’t ready to make big commitments, he is glad the social worker is taking an interest in him. The pair have certainly faced a few hurdles in their relationship on Casualty, with their professional lives on the BBC medical show often putting them front and centre of the drama. However, they could be forced to go their separate ways following Saturday night’s episode of the television programme as a secret threatens to change their lives forever.

The drama starts as Marty begins to get warning signals about his relationship with Adi when the social worker tells the nurse he needs to speak with him that evening.

With the beloved character worrying about what the news could be, he is suddenly called to treat a patient called Jessica Holten (Maya Saroya).

It is explained the newcomer was caught up in a shoplifting incident and sustained minor injuries as a result of getting in the way of the criminal.

When it’s clear she knows Adi, Marty senses the awkward tension and asks how the pair know each other when this is the first time he is meeting or even hearing about Jessica.

Adi makes the excuse he has to attend a meeting but he shoots Jessica a glaring look which doesn’t go unnoticed by Marty.

When Adi returns to the hospital, he goes in to check up on Jessica, who confronts him about his shift behaviour around Marty.

The social worker explains he doesn’t want anyone to know his business and would rather stay secretive about his private life.

This doesn’t do anything to help Marty’s curiosity as the beloved character starts to think the worst about his romance.

He begins to put the pieces of the jigsaw together and assumes there is something going on between his patient and boyfriend and knows they have a past.

When Marty decides to confront his boyfriend again, Adi is forced to admit they are old friends but he should have nothing to worry about.

In the moment, Marty is shocked when Adi admits he is falling in love with him, a comment which both surprises and comforts the nurse.

Though he genuinely might feel this way about his boyfriend, it seems the social worker also made the admission to use it as a distraction technique.

As Marty gleams from ear to ear to think he might have finally found the man of his dreams, viewers will know Adi hasn’t been 100 per cent truthful.

This is because Jessica is actually pregnant and she is carrying Adi’s child.

He explains to the newcomer he hasn’t told his boyfriend the news and he doesn’t want her to blab either, but how long will this go on for?

It is inevitable Marty is going to find out the truth about Adi’s life-changing secret of how he is going to become a father.

This could change the dynamic of their relationship as Marty wasn’t even willing to buy a place with his boyfriend a couple of weeks ago.

The idea of being a father to a child he knew nothing about could prove too big a hurdle for the nurse to get over.

Therefore, before anyone gets hurt, he could end the relationship and tell Adi he wants nothing more to do with him.

Viewers would be left heartbroken as they would have thought this romance was going to finally work out for Marty.

The actor who plays Marty, Shaheen, has previously spoken out about his character’s love life and how unfortunate he seems to be.

Former EastEnders star Shaheen said: “I mean, I can’t say I’m the best when it comes to romantic situations myself – I’m 23.

“I still have loads to figure out! But Marty’s just a hopeless romantic, and he needs to start thinking with his head rather than his heart.

“Marty has a void that he needs to fill after coming out and not being accepted by his dad,” the soap star continued in his interview with Inside Soap.

So could the spit from Adi see Marty revert back to his old ways of taking drugs and having meaningless flings?

Casualty continues tonight at 8:45pm on BBC One.