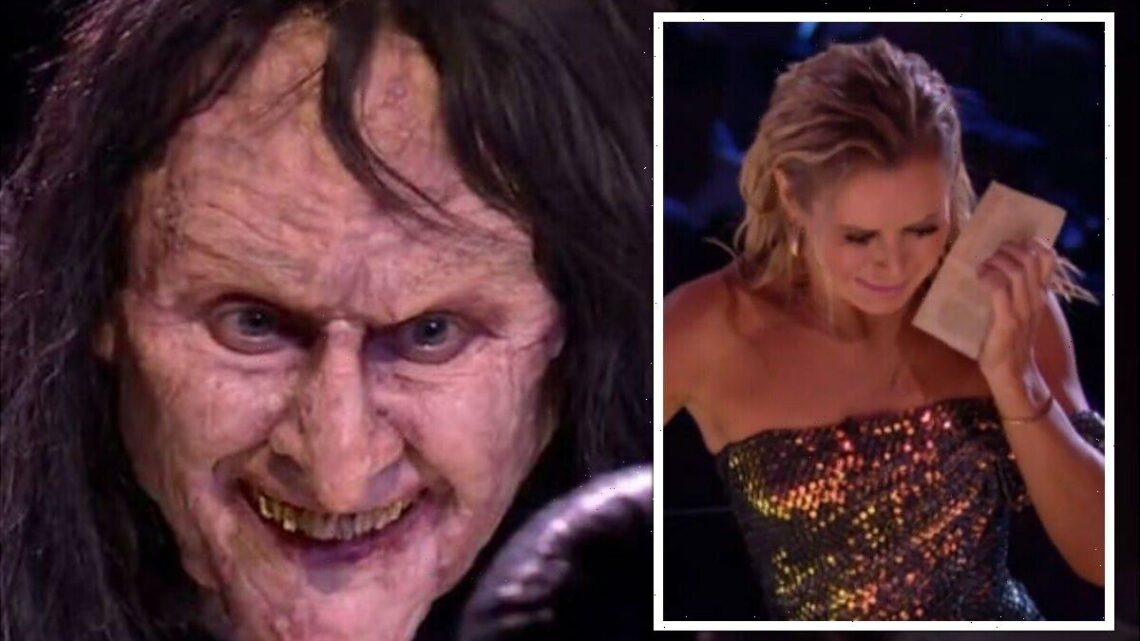 BGT: Amanda and Alesha terrified by rat during The Witches' act

Britain’s Got Talent live semi-finals kicked off on Monday night and saw The Witch return to the stage with an even bigger theatrical performance. The Witch took their act to new heights as Amanda Holden and Alesha Dixon jumped out of their seats after uncovering a live rat. Now, viewers of the ITV talent show have claimed they know who is behind the horrific act.

The Witch wreaked havoc in the studio and chased poor Amanda and Alesha with the rat, which magically appeared from a box on the panel.

Since seeing the second performance of the Witch many viewers have been theorising who they think is under the make-up, with many having the same opinion.

Taking to their social media, @DebsMadCat tweeted: “The Witches…. that one was Stephen Mulhern, I think, one in the audition was Ant, and I think the third one in the clip was Dec #BGT.”

@Kellywilliams4 went directly to the main suspect and quipped: “@StephenMulhern, I think your the witch #bgt.”

Looking at the clues, @ElloTeenah wrote: “The Witch is going to be Stephen Mulhern. No official Twitter page.

“So has to be a magician connected to the show. That hasn’t done that for years. And there was only one in the audition.”

@jemmabondx exclaimed: “Actually, The Witch DOES sound a bit like Stephen Mulhern #BGT.”

Stephen Mulhern responded to the theories and shared a snap of him backstage with makeup artist Lisa Armstrong.

Accompanying the pictures, he quipped: “Everyone keeps asking if I’m the Witch from @bgt! Well, you might want to ask @lisaarmstrongmakeup what I look like before she puts makeup on me!”

Despite blowing the judges away once again with their performance, unfortunately, The Witch was eliminated from the show and didn’t make it to the finals.

Commenting on the act after the performance, Ant exclaimed: “Urm, the act has kind of disappeared, and we have lost a judge.

“Back in your seats, judges, there is no need to chat after that you were sufficiently scared, and if you at home think The Witches deserve a place in the final, you need to vote for them.”

Later Dec asked: “Amanda, a lot of surprises tonight, Amanda have you recovered from the scariest one of all?”

“No, I haven’t I thought I was on I’m A Celebrity Get Me Out of Here! Never ever ask me to do that show, it was the most terrifying thing that has ever happened to me in 16 years.”

The winner of the first live semi-finals and taking first place in the final show was opera singer Maxwell Thorpe.

Asking how he felt to be in the final, he explained: “Incredible. Thank you so much, thank you!”

It was then the judge’s decision to put through the second winner of the show, who also landed a place in the final on Sunday.

David Walliams said: “Tensions are running high, I can’t hear myself think. Both of these acts were brilliant, you couldn’t fault either of you, but I am going to go with my heart which is Jamie.”

Alesha was next and revealed: “This is really tough, especially when both are equally brilliant at what they do! Jamie, I love you, but I think I am going with magic tonight.”

Simon Cowell was last to choose and decided: “I am going to take it to the public vote,” where Jamie Leahey and his ventriloquist act.

'Ozark' Creators 'Aggressively Pursued' This Actor Before Finishing the Script