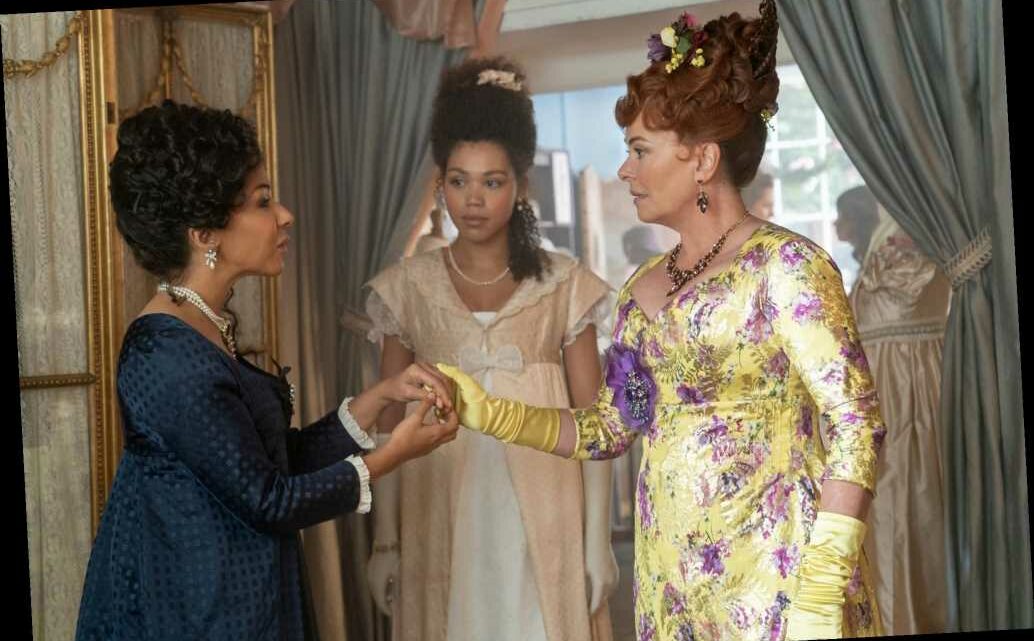 Within the scandalous and high-class society that is the Bridgerton universe, Genevieve Delacroix is a sought-after dressmaker who creates the most elegant gowns in town. Her French boutique, Modiste, is not only a place for women to get the latest fashions, but it's also a hub for gossip, mingling and more.

But underneath the tulle and corsets, this business-savvy seamstress is hiding a secret: she's faking her French roots.

Madame Delacroix in truth is an English commoner, but to maintain the appeal to her upper-class customers, she pretends to be something she is not. However, everything she's built is in peril when Marina Thompson, played by actress Ruby Barker, threatens to reveal her secret. RELATED: Will Bridgerton Get a Season 2? All the Burning Questions We Need Answered

"She knows that could be a disaster for me business-wise, so my character is absolutely terrified at that point ," Drysdale, 39, tells PEOPLE in an exclusive interview. "Around that time in society, there's not that many self-made women who are independent, who have agency — and somebody like Genevieve worked really, really hard. She's putting on this act in order to maintain this lifestyle, in order to keep the clientele. She's the most in-demand dressmaker in the season."

In 1813, the English held the French in high regard, whereas an unmarried working Englishwoman like Genevieve would not have been given a passing glance, especially in the world of fashion. RELATED: Love Bridgerton? Here are 11 Other Period Pieces to Tickle Your Fancy

To portray the role to the best of her ability, Drysdale says she did extensive research. She shares that Jennifer Kloester's book, Georgette Heyer's Regency World, was a big help when it came to understanding the real world that Bridgerton is based on and the nuances of Madame Delacroix.

"I think everybody who's obsessed with Bridgerton should read it, because it gives you a historical context to the society that they're all in at that time," Drsydale says. "It gives you information about modistes and dressmakers, and how it was really important for dressmakers to be from Paris [in order] to get the best clientele. You had to be French. And so those who weren't French would pretend to be French. They weren't necessarily Madames at all, but it was just part of the act."

RELATED: Watch Bridgerton Star Nicola Coughlan Get 'Ball-Ready' as She Transforms Into Penelope

Drysdale says playing this double-sided character allowed her and executive producer Chris Van Dusen to collaborate on exactly when each accent should be used based on what other characters Delacroix was talking to in a particular scene.

"He did give me a lot of room to play around with it," says Drysdale. "There were some moments where I would say to him, 'Oh Chris, am I speaking in English or in French in the scene? Would I be English with Benedict? Or would I be French with Benedict?' Because it wouldn't explicitly say in the script, so we had to come to those decisions together."

After its release, the binge-worthy series became a massive hit after garnering buzz for its steamy scenes and scandalous affairs. Now, Drysdale shares that the "thirst" for the show has yet to die down.

"It's kind of mind-blowing. And each day we're hearing more figures," says Drysdale. " I'm getting so many messages from people saying, 'When is there another series? I need it now.' And I've had to tell people, 'You can read the books.' Even the books have been selling out. So yeah, I've had a lot of sleepless nights because I've just been so fizzy. It's just really hard for us all to compute. It's so surreal. It's like a dream." RELATED: Bridgerton Books Selling for Up to $700+ After Hit Netflix Series Drops

Amid the fervor over their new show, Drysdale says she and her cast mates have made it a point to stay in touch with each other.

"There's a WhatsApp group for the Bridgerton cast, and we share things like the memes that have been going around on the internet that we find funny," says Drysdale. "There's these amazing TikTok Bridgerton musicals, and we will share those. It's a lot of fun!"