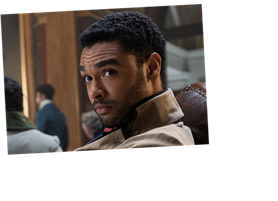 The odds of “Bridgerton” breakout Regé-Jean Page becoming the next James Bond are turning more in the actor’s favor, at least according to British betting firm Ladbrokes (via Variety). The firm’s Bond predictions are closely watched in the U.K., and buzz around who will replace Daniel Craig as 007 is at an all-time high since the upcoming “No Time to Die” marks Craig’s final Bond outing. Page has jumped to 5/1 in the betting after being 40/1 before Christmas.

Ladbrokes representative Alex Apati told Variety, “Tom Hardy still leads the way as favorite, with James Norton close behind in second place. But it really is all to play for in the race for 007 and [Regé-Jean Page] has a great chance if the odds are anything to go by.”

Page added fuel to his own Bond speculation in a December 16 social media post that read, “Regency, royalty. Shaken and stirred,” a reference to how Bond likes his martini mixed. Betting in favor of Page took off following the Christmas debut of Netflix’s “Bridgerton,” where he stars as heartthrob Simon Basset, the Duke of Hastings. It’s not unusual for Bond contenders to gain heat amid buzz for a breakout series. Such was the case with Cillian Murphy and “Peaky Blinders,” Richard Madden and “Bodyguard,” and Paul Mescal last summer amid “Normal People” popularity.

“All of those aforementioned names have seen their odds slashed immediately after a huge hype around the show they most recently starred in, hence why it’s no surprise to see a similar pattern with Regé-Jean Page,” Apati told Variety. “However, what strengthens RJP’s chances somewhat more is that an announcement feels seemingly imminent [around] Daniel Craig’s replacement, so the timing of ‘Bridgerton’s’ success may well have worked in his favor.”

“Bridgerton,” the first original Netflix series under Shonda Rhimes’ overall deal with the streamer, has proven to be a smash success if Netflix’s viewership numbers are to be believed. The streaming giant announced earlier this week that “Bridgerton” is projected to reach 63 million households in its first four weeks of release, making it the fifth biggest Netflix original series launch of all time. The show has reached number one in 76 countries, including the U.S., U.K., Brazil, France, and South Africa.

The next Bond film, “No Time to Die,” is currently on the release calendar for April 2, 2021. As for the betting odds for the next actor to tackle Bond, the ranking is below (via Variety):