Home » TV & Movies » Bradley Walsh stumped as former Corrie star appears on The Chase: ‘When I was on it?’ 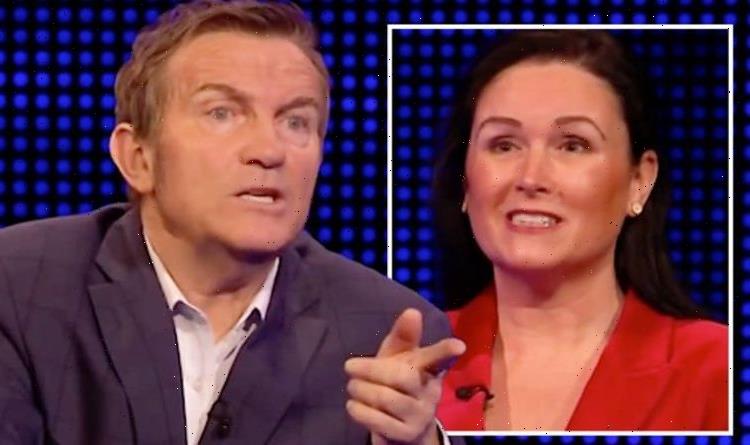 Bradley Walsh stumped as former Corrie star appears on The Chase: ‘When I was on it?’

The Chase: Contestant reveals she worked on Coronation Street

Nina, Chris, Scott and Florence were the four quizzing amateurs hoping they had what it took to pocket some cash from Friday’s The Chase. They faced formidable opposition in the form of Jenny ‘The Vixen’ Ryan, however, who would be doing her best to stop the team from making it back for the Final Chase. And the first contestant Jenny had to take on was Nina, although it was her previous work on ITV soap Coronation Street that piqued Bradley’s interest.

Nina was first up to take on Jenny on Friday’s episode but before she could get to grips with the cash-builder, Bradley wanted to get to know her a bit more.

“Welcome to the show, Nina,” Bradley began as she replied: “Thank you.”

Continuing the intros, Bradley asked: “Where abouts are you from?”

“Warrington,” Nina answered as The Chase host probed further: “Okay, what do you do in Warrington?”

Keen to know more about Nina’s occupation, Bradley quizzed: “How long have you been doing that?”

“Seven years now,” Nina replied before Bradley delved into why she had chosen it as a career path.

Nina revealed: “I was already on the books as a TV extra, I did a bit of modelling myself as well.

“So just ended up working in the office,” Nina continued before Bradley jumped back in: “So TV extra, did you ever work on Coronation Street?”

“Yep, loads of times,” Nina said with a smile, prompting former soap star Bradley to excitedly ask: “Did you ever work when I was on it?”

Unfortunately for the two, the pairs’ paths didn’t cross but Bradley still remained surprised to learn of their stints of the same soap.

Nina went on to reveal she had planned to put any money won towards an extension – although things didn’t quite go to plan.

As the quizzing got underway, Nina failed to impress and was caught by Jenny before being able to make it back to the Final Chase.

Reacting to Nina’s stint, Diane Morcom penned on Twitter: “#TheChase No extension for Nina then.”

While @BALDW1NS excitedly responded to Bradley’s mention of the soap: “bradders mentioning corrie to one of the contestants on the chase omg come back my dear.” (Sic)

After Nina said her goodbyes, Chris stepped up next and managed to add £5,000 to the prize fund.

Final player Florence took on Jenny for a higher offer of £65,000 and managed to bring it back to Chris, leaving the pair playing for £70,000.

However, after only racking up 12 steps in the final round, Jenny soon caught them and sent them home empty-handed.