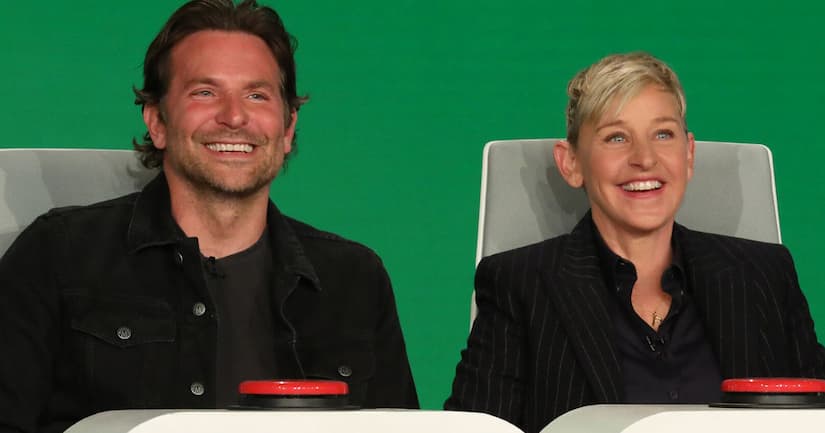 The “Avengers: Endgame” star joins Ellen DeGeneres for a hilariously awkward game of “5 Seconds” and a probing session of “Burning Questions.”

Bradley Cooper insists he wasn’t nervous at all to perform live during the Oscars telecast alongside Lady Gaga. But he was terrified.

The "Avengers: Endgame" star dropped by "Ellen" on Thursday where Ellen DeGeneres put him through the wringer with two different games. Plus, he shared a pretty wild "Game of Thrones" theory and broke down why he was worried he might have bottles thrown at him during some of the live performance footage in "A Star Is Born."

It turns out, the fans weren’t getting quite the performance in reality that we saw on film. "They couldn’t hear it, because we never played anything through the PA system," he said. "We couldn’t release the music before the movie came out. That’s why you don’t know if they’re going to throw a bottle at you."

He actually said he’d accounted for a possibly negative reaction from the crowd. Had it gone bad, he was going to simply have his character spiral down immediately after that performance.

But, despite the awkwardness of it, the crowd was supportive, just as the Oscars crowd was incredibly supportive of his live performance of "Shallow" alongside Gaga.

"I actually wasn’t nervous because I worked so hard," Cooper insisted. "And Lady Gaga’s so supportive. But it was terrifying, absolutely. Because I’m not a singer and I didn’t sing before this movie. It just shows you if you do work and and you’re with supportive people that you can do things you never even dreamed possible."

Does that mean he’d consider making appearances on tour with Gaga to perform the song for her fans? "I mean, no," the actor shot back quickly. But he did have an idea of his own.

"You know what I thought would be a cool thing to do maybe one night is do like a live reading of the movie of the script and sing all the songs as you’re reading the script like at the Hollywood Bowl or something," he said. "That would be cool, right?"

Unfortunately, he didn’t get the enthusiastic response from the audience he was expecting so he joked that the idea was already off the table.

In the middle of a game of "5 Second Rule," Cooper dropped a very interesting "Game of Thrones" theory about the next episode, or at least some point during this final season of the HBO series. It came when he was asked to name three shows he’d watch when his daughter goes to bed.

But then, he remembered this theory kicking around in his head. "How about this: Arya can be a White Walker," he said. "That’s my thought for next episode. Think about it. She can take the [face] of a White Walker. Might be a way in."

It’s certainly a fascinating idea, though to our knowledge they can only be killed with dragon glass or fire and they don’t necessarily leave pretty corpses. Still, it would be a way to tie that particular skillset into the narrative of the war to come.

Elsewhere in the game, DeGeneres’ mind went to a complete standstill when asked to name three words for making love. "Uh, doin’ it," she said and then she just stood there until the time ran out. As Cooper died laughing, the whole thing devolved into imagining couples announcing this while in the middle of "doin’ it."

Finally, DeGeneres strapped Cooper down to her "Burning Questions" chair where he quickly realized how much he enjoyed pressing the pointless button.

While there, she probed for the important answers like what kind of underwear he wears, what he wears to bed and his favorite curse word. This one was presented in Italian and was such a string of words, we thought the audio had malfunctioned.

"Wow, it gets a lot in there," DeGeneres joked. "It also sounds like a delicious pasta dish."

She also asked him where he keeps his Grammy, which absolutely threw the actor as he thought she was joking. "I was like, Grammy? What are you talking about?" Cooper laughed. Elsewhere in the show, he’d revealed that his statuette had only arrived the day before. Clearly, the win hasn’t suck all the way in yet.