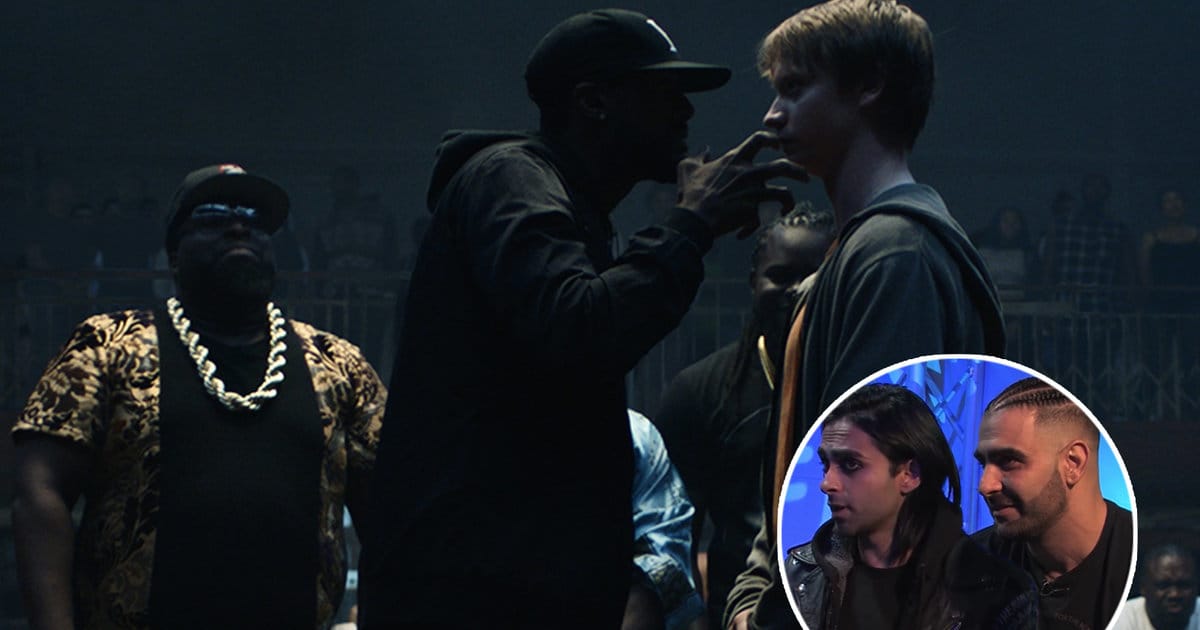 Spoilers ahead obviously, but fans of the film need to hear producer Adi Shankar and star Dizaster share their their takeaways from the movie packed with cultural commentary.

There is more to the ending of "Bodied" than meets the eye.

Adi Shankar, who produced the battle rap comedy with Eminem, told TooFab that although the movie currently streaming on YouTube Premium is "open to interpretation," he thinks the main character, Adam, was not a winner.

"He did not win at all. In fact, he lost," Shankar said in our chat alongside star and real-life battle rapper Dizaster. "How you interpret the end of the film is more of a reflection of who you are and your own value system than some value system intrinsic to the film."

Director Joseph Kahn’s slick flick about a white, nerdy Berkley graduate student successfully entering into the underground world of battle rap ends with the perceived protagonist (Calum Worthy) taking a punch in the face during a heated match up with Dizaster’s character, Megaton, only to get right back up and continue spitting bars. Megaton appears to concede and hold up Adam’s hand as the champ while the crowd goes wild.

It sure looked like Adam walked away a winner at the end of his hero’s journey, but Shankar and Dizaster brought up a good question: What did we win?

By the end of the film, Adam is kicked out of school, ostracized by his collegiate peers (including his own father), dumped by his girlfriend and manages to destroy his friendship with Behn Grymm — the rapper Adam idolized at the beginning of his journey but battled in the third act — by breaking a code of honor and bringing Grimm’s personal life into the ring.

"He sacrificed everything. He’s a piece of shit. He’s not a hero," Dizaster said. "The real f–king hero of the story is Behn Grymm, because Behn Grymm is the guy that pretty much gives him everything — schools him, gives him all the love, brings him in, he’s the one that runs the culture, he’s the guy, and at the end of the day [Adam] makes [Behn] walk away from something that he loved because he was such a f–king piece of shit."

"I felt more attached to Ben when he was leaving," the rapper and actor continued. "As a human being, I was with Ben when he walked away, which I’m pretty sure most people are."

So then why did Dizaster’s character raise Adam’s hand like a champ at the end of their match?

"I punched him, so I fucked up and he stayed true to the battle thing. At the end, I’m the one that lost my cool. He kept it cool, and that’s why I had to give it up to him," Dizaster explained. "That’s what it was more than reviewing my bars."

But on a more personal note, Dizaster did not concede in real life that Adam’s bars were strong than his. "I felt like I got robbed," he joked. "I won that battle!"

These conclusions, however, were not drawn after just one viewing. Part of the magic of this movie that won multiple audience awards on the film festival circuit — including prestigious events AFI Fest and the Toronto International Film Festival — is that audience perception changes after multiple viewings. Sure, it’s structured like a standard three-act Hollywood movie, following a protagonist on a journey to overcome obstacles before ultimately conquering antagonists and growing as a person. But there are also serious cultural questions layered underneath the surface

"It’s kind of using that Socratic method of asking a lot of questions, asking probing questions that are kind of deeper than your general cookie-cutter, Hollywood ending," Shankar explained.

And that’s just one question. The movie also tackles cultural appropriation, white privilege, political correctness and tribalism in America. More subtly, as Dizaster pointed out, it also asks audiences to consider what makes a character a hero and what makes one a villain? After just one viewing, it’s easy to walk away thinking that temperamental battle rapper Megaton is the villain of the story, since he becomes at odds with Adam and Behn’s crew and challenges one of their weaker members to a battle and punches Adam, the perceived hero.

Well, Dizaster wanted to make one thing clear to TooFab: Megaton is not a villain.

"Megaton is a man with a code of honor and a man that lives by a code: he just wants to be f–king beat. He just wants someone to give him some competition," he explained. "This is why [he] didn’t smoke Che in the living room. [He] could have shot him in the head and killed all of his friends, but [he] didn’t because [he wants] to beat him in a battle."

"Shooting him is not good enough, and that’s pretty much who Megaton is. He’s a good guy that pretty much has a fucking code," he continued. "And if you cross him, he’ll crush you."

"Bodied" is streaming on YouTube Premium now after a limited run in select theaters last month. Watch the entire conversation about the ending of the film with Adi Shankar and Dizaster in the video above, and watch the video below to see the battle rapper tear into James Corden for cultural appropriation.