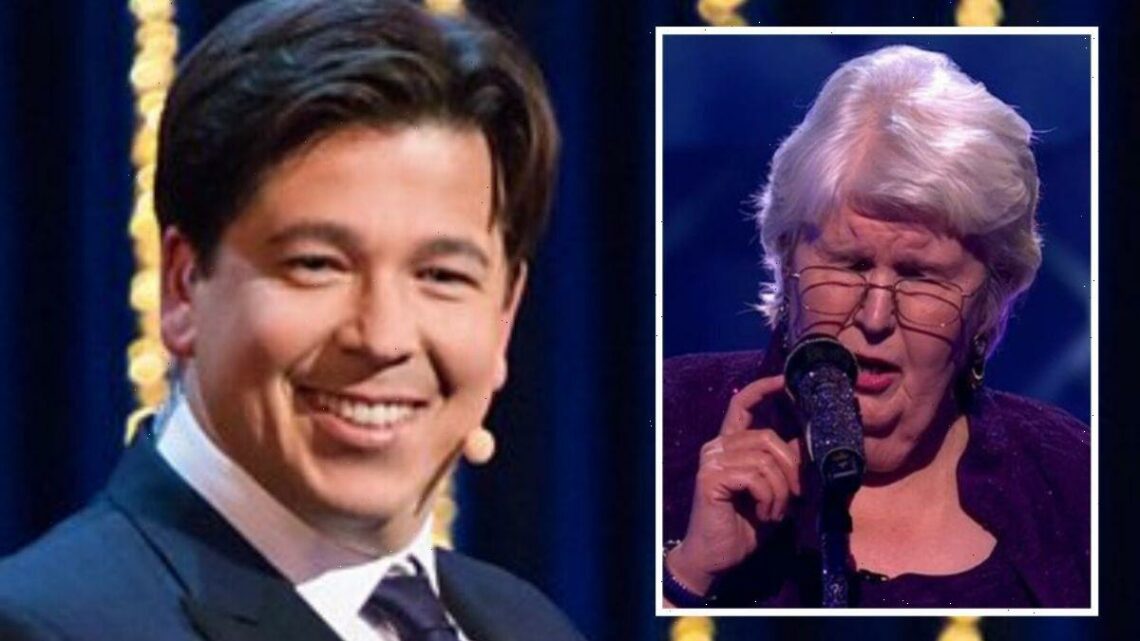 Anne Wilkins is a singing teacher and soprano who has performed all around the world. She treated her neighbours in Bridgend with an impromptu performance when they came out to clap for the NHS. She was brought out as a surprise guest on Michael McIntyre’s Big Show and left the audience stunned by her voice.

During the coronavirus pandemic, many people stood on their doorsteps and applauded the work of NHS and frontline workers.

One evening, Anne left her friends and neighbours stunned with her rendition of Over The Rainbow, as she performed with neighbour and West End actor neighbour Alyn Hawke.

Anne had recently been nominated by her biggest fan Alyn, along with her other adoring neighbours to appear on Michael McIntyre’s Big Show on Saturday.

Each week during the show, a member of the public is nominated by loved ones as an “unexpected star”, to give them the opportunity to perform to a live audience on prime-time television.

Introducing the segment, Michael introduced her and said: “Anne, who has been blind since birth, has one huge passion in her life – and that is singing.

“It was during lockdown that Anne gave some of her most special performances – encouraged by her friend Alyn, she sang her heart out for everyone on the street.

“So Anne’s neighbours, especially Alyn, decided they wanted to give her a special surprise as a way of thanking her, so they have nominated her to be tonight’s unexpected star – it’s a good one.”

To get Anne into the studio where the show was being filmed, they set up a fake recording studio, where she was told she would appear on a fictitious podcast Inspirational People hosted by Anita Rani.

During the interview, she was told a special celebrity guest would appear and was asked who her dream guest would be, she replied: “Bryn Terfel.”

However, it was Michael McIntyre who showed up instead, and he told her: “I’m incredibly excited to tell you that you’re on my show right now.

“This is Michael McIntyre’s Big Show and you’ve been nominated to be the unexpected star of the show. You are actually backstage at the theatre and there are 2,000 people sitting there watching us.

“They know all about you and you will be performing for us tonight if you agree,” to which Sue laughed and agreed with pride.

When the time came for her to perform, Anne walked on stage dressed in an elegant purple gown alongside her hero Bryn Terfel.

They duetted a beautiful performance of All I Ask of You from The Phantom of the Opera musical by Andrew Lloyd-Webber.

Anne received a standing ovation, and after her performance said: “I was really super surprised when I realised Michael was behind this. I never guessed anything like this.

“It’s a dream come true. I’ve known Alyn all his life. I really appreciate what he’s done. I’m looking forward to performing very much. It’s something I never thought I’d do.”

Viewers of the show were left blown away by their performance, with Nicola Yerril posting on Twitter: “@Bryn_Terfel #michaelmcintyresbigshow that was totally wonderful. Certainly not crying.”

Jan Hawksworth said: “OMG this lady and Brin blew my mind last night … thank you Michael McIntyre #michaelmcintyresbigshow they should make a record together.”

@Gabbaranks expressed: “Loved loved loved the show tonight!! Anne was a pure joy and what a voice! #michaelmcintyresbigshow.”

Rosemary Lee praised: “Special moments are sometimes rare these days but listening to Anne sing was definitely one of them #michaelmcintyresbigshow.” (sic)